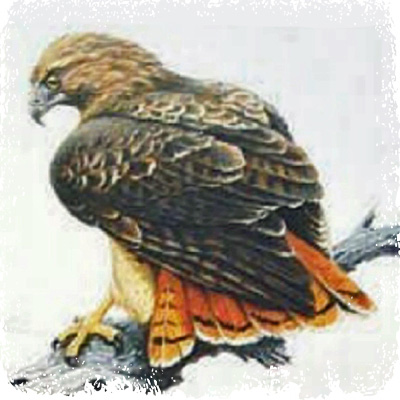 When observing the Red Tailed Hawk, the most distinguishing characteristics and attributes of these splendid birds of prey, are their eyesight, sharp talons that adorn their feet, and their vibrant red tail feathers.  These are the very characteristics that reflect the Latent Power of this member of the Hawk family.

For purposes of examining the keyword of Latent Power, we begin with the Hawk`s sharp talons.  In the wild, a Hawk`s talons are instruments of deadly precision.  The talons will grasp their prey in a merciless grip while the beak rips and shreds in the quest for survival.

The second component to observe in the Red Tailed Hawk as it pertains to the key word of Latent Power, are the vibrant red tail feathers of the mature Hawk.  These feathers are a Gift of maturation, and the power and energy that they represent for the two-legged with this raptor as a Primary Totem is very significant.

For the two-legged beside whom Red Tail Hawk flies, a sharp mind will be evident, and these souls will possess the ability to perceive the subtlest of nuances that might escape other less "observant" individuals.  Although this may be a tremendous Gift in assisting the Red Hawk Soul in the business world (and less intimate arenas of their daily Life), this same gift of communication and sharp intellect can also be used as a weapon, and words may become like the sharp beak and unrelenting talons of their Totem when these individuals are either attacked, or if they are operating from an unintegrated Personality Center.

There may be situations and circumstances when there is a need for the type of more direct speech that the Red Hawk Soul is capable of, and in those circumstances, the use of this inherent talent serves the individual well.  Yet part of the evolutionary process for the Red Tailed Hawk individual, is in learning how to master this gift and wield its great power with conscious awareness, ever-mindful of its potential for either great insight, or great damage.  When the Red Hawk Soul is then operating from such Higher Intent, these are the natural born investigators, psychics, attorneys and observers that deploy their acumen for insight and direct speech in a constructive, rather than destructive, manner.

Looking at the next component in understanding the Red Tailed Hawk`s Power, are the beautiful red tail feathers which distinguish this Hawk from other cousins.  This Hawk does not receive his/her red feathers until a sufficient level of maturation has been achieved.  When looking to the human beside whom Red Hawk flies, this is quite significant as well, for it indicates that the Red Feathers are not easily given, and must instead be "earned."

When witnessed in Nature, the color Red represents Power, Energy, and the Kundalini.  The Kundalini is the Force that directs the flow of all other energy fields within the physical body.  This Force lies dormant within each of us when we take up the Robe of Physical Life, and is thought to lie coiled at the base chakra (located near the base of the spine) and referred to as the Serpent Power.  There the Power lies sleeping until it is awakened via the Soul who begins the journey on the road of spiritual discovery and who is consciously acknowledging and incorporating their Life Lessons.

Some envision the Kundalini as a powerful sexual energy, yet to view it thus is to limit the true breadth and power of this fundamental energy, for it is then keeping that energy coiled at the base chakra (sexual center), rather than encouraging it to reach further and higher.

At the time the energy is awoken, it begins to rise up through the other six energy centers (chakras).  As it passes through each of these chakras, the lessons, issues and areas of our lives which are symbolized and or governed by these energy centers, are opened for our acknowledgment through the process of Conscious Awareness.  Thus, when the Kundalini has completely uncoiled, its energy unfurled along the length of the spine and flowing easily through all seven energy points to emerge through the top (or Crown) Chakra, a state of Enlightenment is experienced.

This is a gradual process however, and should never be forced or pushed, for those who have attempted to do so, often experience either physical or mental/emotional collapse that can end one in a visit to the hospital or seriously ill. Hence, the symbolism of the Red Tail Feathers emerging only after sufficient maturation.  For the two-legged with this Animal Totem, this indicates the need to approach spiritual awakening in a gradual, careful and conscious manner.

Yet once this fundamental energy unfurls as the Red Tail Feathers emerge, the beauty and depth of Spirit that shines brilliantly forth, will be both inspiration and guidance for Others who may be just beginning, or in the process of, their own awakening.

All Hawks are renowned for their visual acuity, with members of the Hawk and Owl family possessing the greatest vision of all raptors.

Red Tailed Hawks will utilize this powerful vision while soaring on the wind’s currents far above that they may have a broad field of vision with which to discover, and then track, their intended prey.

Red Tailed Hawk will soar beside the Two-Legged whose own gift of psychic vision may be exceptionally acute.  This may take the form of precognitive dreams and/or visions during which these souls are quite literally able to "see the future."

If the gift of vision is not present from birth, then there will exist within the Red Hawk soul, the ability to pierce the veil that separates falsehood from truth.  They will also possess an intensive gaze that can leave those who might find themselves the object of such a gaze, squirming under the penetrating stare.

Equally, Red Tailed Hawk individual will have the ability to view the broad picture, in much the same fashion that a Hawk can gain a wide view of their surroundings while soaring on the unseen currents of wind as they ride the sky.  The human counterpart will be a believer in the philosophy that all things happen for a reason, and it will be this awareness of the Big Picture, that will assist both themselves, and those whom they share their gift of keen insight with, through many a difficult time

In the following quote, Chief Seattle eloquently expresses the concept of Guardianship:

"What is man without the beasts? If all the beasts were gone, man would die from a great loneliness of spirit. For whatever happens to the beasts, soon happens to man. All things are connected.

Part of the Role for the two-legged beside whom Red Tailed Hawk flies is that of Guardian of the Earth Mother.  These are individuals who will possess an astute awareness of the concept of the interconnectedness of all things, and will have an inner reverence for all life.

These are the souls that are involved in making the world a better place, whether locally or globally.  They will be protectors of the Earth Mother and tread softly upon her, encouraging and educating Others to do the same.

Often, they are either found initiating or actively involved in environmental causes, where their keen perception and insight will serve their chosen cause well.  Yet it is their day to day existence and fundamental philosophy/foundation of action and belief, that distinguishes these individuals as true champions of Mother Earth as they seek to live in harmony with the Ina Maka and all that She births, provides, nurtures and sustains.

We have 1048 guests and no members online