Time Slips and Exploration
A+ A A-

ALL Earth Entities Have Decided to Ascend 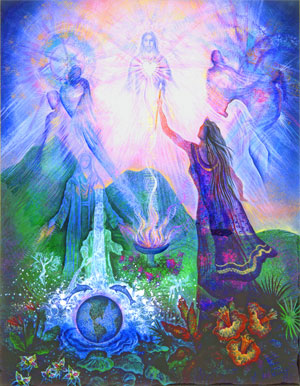 Some believe ascension means to leave earth and live the remainder of this life on a twin or distant planet. Others that many will shift their being while of earth in this lifetime. Neither concept is completely correct. For you are to move to a different place – but that place is within the environment you now label earth.

Earth is shifting, as are all the entities of earth above, on and below – and expanding in terms of what you visually see, sense and what you experience. Many of you wish to explore other planets and dimensions believing you know all there is to know about earth. Such is not true.

Even though humans have explored many parts of physical earth, there are places and entities yet to discover. A bit like thinking you must travel to Paris before your life is complete and you miss the beauty of your small community – pining for something that cannot be, while missing what is.

Many of you wish to dimension hop and travel to other planets. Such is part of your mission/role. Others are not interested in doing so as they discover nuances of their current life that capture their interest – and their role.

We wish to help those who have no interest in traveling to other places or dimensions understand how important their role is. For those of you who are space/time travelers believe you are role models for all.

Some of you are discovering that exploring within is more fascinating than you imagined. You are exploring new emotions, feelings and entities within your known circle. Such as discovering the gentle, elderly woman who lives down the street even though you have lived near her for years.

You planet hoppers have difficulties understanding this for you have explored emotions and connections for years. But if you understand that many have ‘dummied down’ their human and nonhuman interactions to fit societal models, you will realize others might not have had urges to explore their world as have you.

Perhaps those we are speaking of dislike a certain race or religion – not because it is who they are, but because they were trained by their society. While you explore beyond the concept of love of those of earth or other dimensions, others will enroll in Emotions 101.

You can not expect that one day next week all will love one another and as a result, entities from other dimensions and places will peacefully appear. If entities from other places and dimensions were to appear tomorrow, most earth inhabitants would be terrified – including those of you of the light. Indeed, many humans continue to have difficulties with humans who do not think or look as they do.

As you explore beyond understanding humans and related entities, many in your community are just starting to do so. Allow them to process what they need to process without humiliating them for being slow learners. Know that shifts of this nature ARE a process.

Perhaps you think this type of ascension will take generations. Not at all. Maybe months or a few years, but all is progressing at a more rapid rate than you now imagine.

Even though initially it appeared as if many would not be of the light such changed the past few months. By the time you exit earth in this lifetime, many will be freely exploring other dimensions and planets with the support of those in Emotions 101, 102, 103, etc.

The light is expanding much more rapidly than we or you thought possible.

No one wishes to wait for new earth. Those few who do will exit in the near future. For indeed, more are exited about new earth than was true originally and decided to be of earth during and immediately after the transition. Those of you reading this piece are committed to exploring new earth in all it’s ramifications of love, joy and peace.

Those who exit in the near future are not evil or whatever term you wish to use to separate them from the goodness of you. They fulfilled their role of introducing new earth and now wish to observe or support from other dimensions.

There are no ‘good guys’ and ‘bad guys’ in this transition – only billions of entities exploring and fulfilling their role. A role that has shifted dramatically the past few years. All of you were excited to explore new earth level 101. You have since decided you wish to take graduate ascension classes – and so you are and have.

Perhaps you believe those starting with Emotions 101 are slow learners. Not at all. They are exactly where they need to be to help you fulfill your role. For indeed, if you do not need to separate from those who do not believe as you do, or transfer to a twin earth, you have much more energy to fulfill your role. Ascension has become global through your love.

Many of you are in disbelief as you read about the love and joy of new earth for such has been promised for so long – yet wars and religious divisions continue and fear is rampant. All is well.

No one would have predicted in 1957 that a Black man could be a United States president  - much less elected twice. Society, your being and the emotions of all are shifting faster than was true 60 years ago.

Return To Love ~ Teachings of the Masters
Become a Patron!

We have 1397 guests and no members online