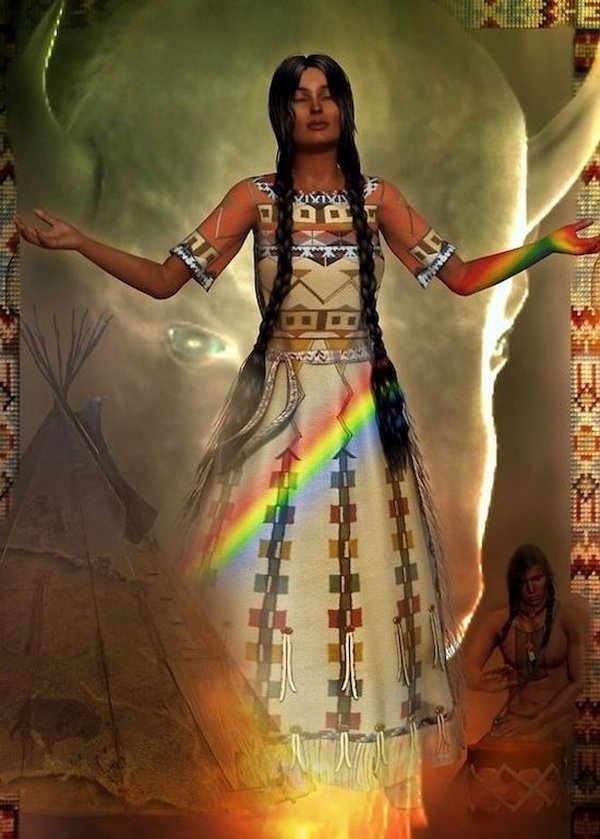 I was guided by White Buffalo Calf Woman to share this today as all of the 12 sacred rays are swirling in our energy fields. May you be blessed by these energies and may her words soothe the heartbreak of the past as we rise into new revelations of Love.

“On the initial days after the birth of this planet, the dazzling sun shone upon it with a multitude of colors streaming from the original twelve sacred rays of the Primal Creator. Each ray carried its own unique vibration, sound, and color. As they danced together, they whirled and twirled glorious ethereal art and music beyond our imagination.

As the energies matured, the elements manifested as fire, water, earth, and air. Nature became the proliferation we’re accustomed to today. Fabulous beings of light walked upon this earth embodying an amalgamation of the twelve sacred rays.

However, according to the divine plan, as the density of the planet increased, human awareness decreased. Some of the higher more refined vibrations were no longer sustainable in this dense environment. So one by one, many of these rays disappeared from human perception, but continued to hold their sacred space for the eventual planetary ascension as we progressed through the natural cosmic cycle. As a result, the planet fell into third-dimensional duality and only four primary rays remain.

As many of the ancient prophecies predicted, the day would come when the rainbow tribes would once again reunite and dance together in a golden age of harmony, creating art and music beyond anything this planet has ever experienced before. However, in order for that to occur, all twelve sacred rays need to be grounded in the earth’s core.

Although all the rays are held within the cellular memory of every being on the planet, one ray is always more prevalent than the others for each of us. Thus, each being responds to life from that dominant ray. Their passion, purpose, and gifts to the world have evolved from this one specific ray. Up until now, only a limited number of rays have been active because the density of our planet could not support the more refined vibrations.

To your dismay, some of the rays you have been carrying have felt dissonant in your life because there has been no resonance for them here on earth. You have never understood the way human beings think and act, for you have a totally different perspective of life. With the grounding of the twelve rays, the hidden complementary rays will act as harmonizers. With this shift in vibration, you will be able to fully relax into your human body and enjoy the depth of life to its fullest.

Today, everything is in the process of changing. The expanded vibration of the planet can now support all these frequencies. By anchoring these vibrations in the core of mother earth, the missing rays become reactivated to open new potentials that will benefit all of mankind.

These harmonizing vibrations transcend the illusions of separation and duality. Thus, we shall walk together in harmony on the sacred path of peace across all cultural boundaries. We will begin to initiate the laying down of weapons, living in harmlessness, in balance with all beings, and working side by side to enhance life.

The rainbow tribes are gathering once again. It is time to birth the new reality that has been written in the prophecies passed down through eons of time. This is the precipice upon which we now stand as the Universe fully opens to us once again.” ~White Buffalo Calf Woman~
*

Gratitude for the artwork by Amanda Wills