Evil and Its Battle with Good 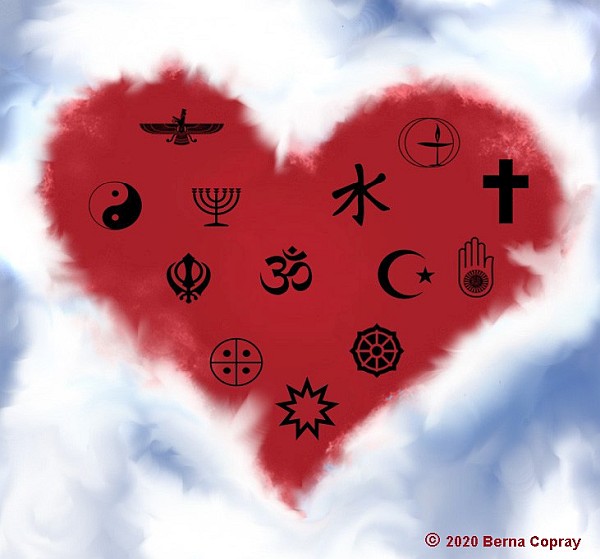 Many years ago, I had a startling experience with love and religion.

Still a teenager, I’d joined the US Navy. (Military service was required in those days.) Stationed far from my New York home, I was lonely and homesick, as were my shipmates. Simon (not his real name), my closest friend on the ship, was also from New York.

We were docked in San Diego, California at the time. Simon and I took a weekend off to explore San Diego. We “accidentally” came across a hospitality house owned by a Protestant church.

The hosts and hostesses there welcomed us warmly. They provided a homey, comfortable environment, food, books, music, etc. And it was all free.

They were not interested in converting us to their religion, only in expressing love to lonely young sailors far from my New York home. (Simon and I were Roman Catholic.)

I wrote to my mother and father to tell them about the hospitality house. Mom was concerned because it was not a Catholic organization. (Things were very different in those days.) So she asked our parish priest about it.

When she replied again, she said Father George (not his real name) was shocked. What Simon and were doing, he said, was forbidden by the Catholic Church. This experience of loving kindness was a “sin” in the church’s eyes.

Simon and I ignored Father George’s remarks. Thus began my long journey to finally abandoning Catholicism. I had thought love and religion were supposed to go together. Religion without love did not interest me.

Many of your world’s religions have totally forgotten their roots.

Over the centuries, since the one you call Jesus walked the earth, Christianity has become warped and distorted. Of course, Jesus never intended to start a church or religion. All he wished to do was to teach humans the power of love. In his view, love and God are synonyms.

So what happened to Christianity?

We’re not “picking on” Christians here. What we’re saying applies to other religious groups too. We’re simply using that example since it’s the religion Johnny and Berna are most familiar with.

What happened was those in positions of authority in the churches began to use, or misuse, Jesus’s teachings for power and money.

That was 2,000 years ago. And it’s mostly gotten worse since then.

Simply, the churches and their leaders abandoned Jesus’s example and teaching of love. It’s no more complicated than that.

In this modern era of chaos and transformation, you are seeing and experiencing a return to love. Not just in the churches, but in every aspect of human life.

This is all good. We know it doesn’t always feel good. But it is.

I can almost guarantee some will find this video dark and offensive. But it carries a powerful message, and will give you a few things to think about.

Copyright © 2020 by John Cali and Berna Copray
Edited by Berna Copray
In the early 1980s, John took a spiritual development course and was introduced to his first spirit guide, Lydia. After Lydia arrived, three other guides also came to him: Archangel Michael, Tamarra, and Chief Joseph. Today these are John’s four main guides. Besides his four main ones, John has various other guides. The entire group is really a multidimensional collective consciousness. John refers to the entire group simply as “Spirit.” Source

We have 1794 guests and no members online