Kwan Yin - We are Women Taking Care of Your Future

Kwan Yin - We are Women Taking Care of Your Future 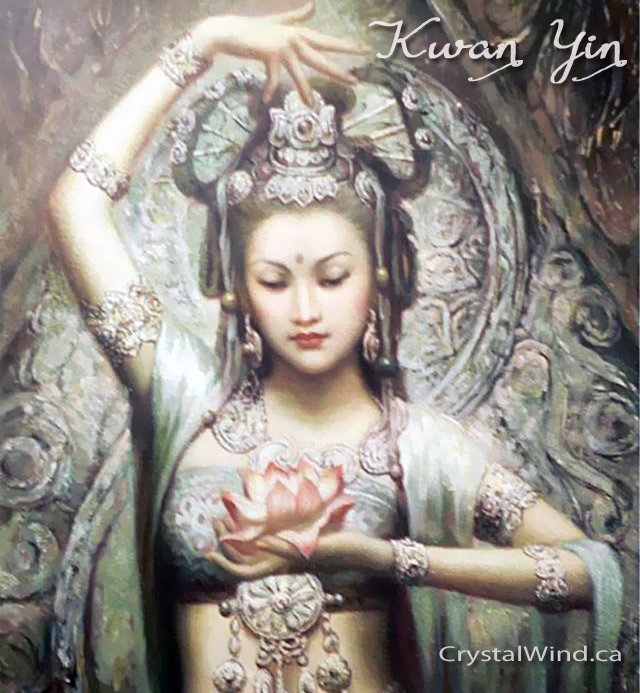 Dear brothers and sisters of this beautiful planet! I AM KWAN YIN!

Being here, so close to you, is a reason of great joy for my heart. My work is to intensify the Legions of Angels and the Legions of the Great Dragons so that we can keep this planet in an aura of Light and Love. To many, it may not seem like this is working, but you have no idea what goes on in the ruling minds of this planet.

We have been doing a work that prevented your planet from literally being totally attacked and you as a human race from being destroyed. Our present job is to confront all the negative energy generated so that none of the attempts come to pass. But, of course, we cannot interfere in everything. The war demonstrates that they still have control of this planet. They are trying to get this war to expand so that the whole planet gets involved, and more and more children of the Light get killed.

My work, Mary's, Magdalene's, Nada's, and Rowena's have been totally focused on destroying these energies. Otherwise, your planet would already be much lower than today. Still, in the hearts of many of you, even those who are awake, hovers doubts, mistrust, and the eternal question, "What are you doing?"

It would be good for you to see the truth entirely. Those who supposedly lead you in your governments with cloaks of goodness deep down are representatives of the non-light. And you believe in and idolize them. Something unsatisfied and doubtful beats inside your heart, but you don't want to agree with those who say they are not what they seem to be. Because you don't want to admit that you were very wrong in your analysis of many rulers on your planet.

Everyone is united. Those who maneuvered this planet until now are in last gasps, causing them a wave of despair and total hatred for what is happening on this planet. They lost the certainty that they would have this planet to do whatever they wanted. They still have partial control because they manipulate your minds, but not control of the planet.

We are very attentive. We, this group of women, let's put it this way, together with all the other beings, wrap each in our cloaks, protecting you from evil. Don't think that they are winning; this is what they want to make you believe. There is a lot of makeup, fake stuff, and artificially created destruction.

So here's one request I have for each of you:

Don't idolize or judge. Don't think that those you think are good really are. Few countries on this planet have rulers of the Light; you could count them on the fingers of a human body. The vast majority are more concerned with their power and how they can still destroy more and more of what exists on this planet. Bringing more destruction into your world; it's like someone living in a house. He lives because he needs to live. He has no love for the place. And over time, he doesn't maintain it, doesn't take care of it, and leaves it to deteriorate with time. And the moment comes when he needs to leave that house, although never cared for or loved when leaving, he would rather have the taste of tearing that house down... "I never really liked it, so I'm going to destroy everything!"

That is their great intention, to destroy everything before leaving. They know they will be judged and will no longer have freedom in the Universe. So what to do? Destroy, kill, and make the people here suffer. There is no love from them; they have long forgotten this verb. So when you ask yourselves, or rather, when you ask us: "What are you doing?" Don't let this doubt remain in your heart.

We are keeping the entire planet. We are keeping you alive because otherwise, you have no idea what the surface of this planet would look like right now. We have access to the timelines, and we know precisely where each period will lead. We are not here as an ornament; we are not here just sitting back and watching it happen. We act every second because their maneuvers don't stop. They are constant.

So, don't get carried away by appearances. I would say at this point, don't idolize or judge anyone. Just wait for the masks to come off to find out who is of the Light and who is not because I guarantee you will be shocked. Now, on the other hand, nothing is hidden. You idolize a being of no light because you want to because he always gives hints of who he really is. He does not deceive 100% of the time; he shows what he thinks in some situations.

So you allow yourself to be deceived because you want to share those thoughts. Do this self-analysis: Who are you idolizing? Does he look like you? Observe: if you justify all of his actions as correct, start watching your opinions. And I would say to each of you: the time now is not to follow anyone; now is to look inward and simply realize where your own shadows are.

Forget the shadows of those around you. It is yours that is important. So, do the inner work of change, of raising your consciousness. This is not the time to idolize or judge anyone. The time now is for self-analysis. It is for introspection to raise your consciousness, not those around you. And at that moment, when you ask the question, "What are you doing?" Open your heart and allow us to show you what we are doing. Then, you will realize how unfair you have been to us. Asking so many questions and doubts about what is being done effectively on this planet.

We don't care what you think. We have a mission to rescue this planet. And be assured, we will. Together with the strength of those beings who protect you and watch over this whole Universe, our strength will not allow this planet to be destroyed and the human race to be extinguished. Of course, there will be attempts, but we will never let them get where they want to go. Now, beware of the energies with which you become compatible.

Idolatry is not a good feeling, and if you are compatible with that being who appears so nice but deep down has a black heart, watch your own energy. Look inside, but with courage, because for sure, you won't see an enlightened heart. But there is still time; you need only choose the path of Light. So don't be compatible with the non-light just for ideas, just for liking someone.

Attention! Pay great attention to those you are following, connecting your energies with theirs. Pay attention! Look into your hearts and have the courage to see what you are really emanating.