The Mother And Father Energies - Mary
A+ A A- 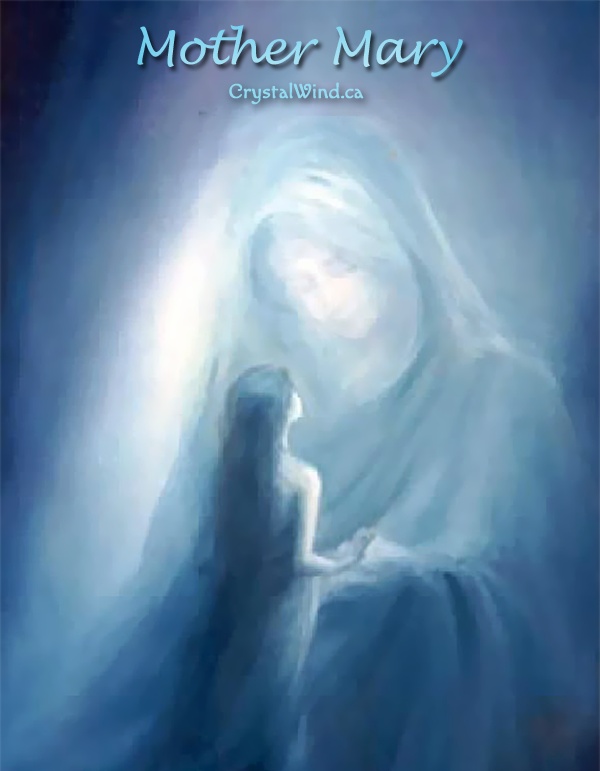 I am Mary. I am the mother of Jeshua and I represent the mother archetype in your tradition. In that tradition, the energy of the mother has become distorted and debased, and this wound affects both men and women, boys and girls. Motherhood is creative in a receptive way. As a mother, you will receive a child into your womb, and you become a channel for a new soul onto Earth. You become physically attached to the child who comes through you; however, detachment begins at birth where you let the new child be its own unique self when you sever the umbilical cord.

The creativity of a mother includes letting go, even though the deepest fusion has taken place when the child is budding in the mother’s womb where it is physically surrounded and nourished. Although this deep fusion has taken place, inevitably, there is also a letting go by allowing the child to complete its way in life in its own unique manner. In this way, motherhood carries two extremes within it: on the one hand, bonding and fusion, and on the other hand, letting go and nurturing the unique qualities of another person.

In your tradition, women were usually limited to their role as mother. They could hardly develop in other areas, since there was too little opportunity for that to happen. They could rarely show their passion and inspiration, their male energy. They were pushed one-sidedly into the role of mother and, therefore, they became excessively attached to their children. They identified so strongly with their motherhood that it was almost impossible for them to let go of their child and, thus, to let the child follow its own unique path. In short, this led to a stifling maternal role that smothered the child.

Traditionally, the father was absent. He was not allowed to play a nurturing, responsible role within the family. His role was outside the family: he was supposed to work and perform in the world. He needed to be a “man”, which meant he had to suppress his sensitive nature. In this way, the absent father was born, and this again had an impact on the child. The family circumstances did not allow the child to free itself and, with the help of the father, to move away from the tight family structure in order to go its own way.

The whole family structure has become distorted in your tradition, with the result that children – such as you and the generations before you: your parents – have inherited an unbalanced picture of the father and mother energies, of the male and female energies. And sooner or later, when in relationships with others, this distortion has its effect.

If you are very strongly identified with the father energy – especially with the absent father – you will have trouble connecting deeply and emotionally with another; you do not have a good example of how that relationship works. In those who fear bonding and merging, there also lives the fear of the stifling mother energy, the reverse side of the absent father. This combined effect can lead to a repeated pattern where you fear bonding with someone for fear of being swallowed up by that relationship and also of being unable to travel your own path within that relationship; in short, a fear of bonding deeply with another.

If, on the other hand, you strongly identify with the mother energy – if you have a strong bonding with the mother energy of the past – then you throw yourself into a relationship and you are afraid of losing the other person. You are afraid of being abandoned, and so the other becomes the beacon to which you cling. In women and men with separation anxiety there is often a father who was absent, someone they look for their entire lives. They are seeking a haven of safety and independence they are missing in themselves. If they meet someone who seems to represent this beacon, they will easily lose themselves in their feelings for that person. This need creates a pattern of excessive needing to merge with another; it lays claim to the relationship, a destructive claim that will eventually lead to conflict and betrayal.

So, you can see how you stand in a tradition of distortions relating to both the father and the mother energies. Although these patterns may seem to be something abstract, they play out quite concretely in your personal life.

I ask you to now connect inwardly with the primal energy of the father, with the cosmic father energy. That primal energy of the father is an energy of protection, strength, wisdom, and overview. Call up that energy, it is available to you. No matter how your biological father acted in life, that father energy is now available to you. What is required of you is to develop that energy in your earthly life. Become aware of the father energy, which you need to walk your path in life in a calm, effective way. You might see a picture of a father figure before you. Ask for an image or a feeling or an energy with which you can identify; whatever image comes to you will work for you.

The father relates to boundaries. He makes distinctions wherever things should be differentiated. He defends you against excessive fusion, against connecting with others where you may overly lose yourself and give yourself away. The father energy helps you to embrace your individuality. You are, as yourself, a unique person; you are not like anyone else, and that individuality is necessary. It belongs to you and wants to be addressed by you, so that you respect your individuality, and, in that way, make your own decisions and your own choices, choices that reflect you. The father inside you knows this and will guide you in this; he cares for you.

I ask you to now connect with the mother energy. Not so much with the energy of your biological mother, but with the cosmic mother energy, which is present in the universe and with which you are connected because you are part of Creation. You are born from both mother and father energies. The true mother energy is loving and supportive with great gentleness, but it lets you go. It does not want to bind you or restrain you, but lets you be free, while she always accompanies and supports you in everything you do.

Experience, if you can, this gentle love in your heart. It is as if you are being held by a hand of love that is always open; an open hand from which you are allowed to fly away, but a hand that is always there for you, simply to love you without coercion, without excessive binding. Try, if you can, to feel this mother energy in you, maybe in the form of a picture of a woman or a female guide, or else through a color or a feeling. Allow yourself to receive this energy so you have what you need to feel safe, secure, accepted; to feel nourished by the love of the universe.

Feel surrounded by the original father and mother energies and realize that you are in a tradition in which these energies have become distorted and debased. However, you are not only a victim, you are also a creator. You come to bring something new onto Earth, which means, among other things, that you will help to restore the balance between father and mother energies, because you are a soul that includes both energies. In the consciousness process that is now taking place on Earth, it is the intention that you, as a soul, awaken the original energies of the father and the mother, and the force of love, all of which are within you.

This process supports you and helps you to fulfill and manifest your potential. It connects your soul with the Earth and, at the same time, it helps others. The more you bring into balance and harmony the old, distorted energies within you, the more light you radiate to others. It is this inner process that is the most essential; it is where real magic takes place. What derives from it outwardly, what your role is in this world, how you live, with whom and how, all that is secondary. The real issue in this life, which is this inner process, is an alchemical process in which your old, distorted energies transform into a new reality.

You all desire to take a step forward, which is in the spirit of the times, and which was also your intention as a soul when you started on this journey, this incarnation. Feel how you possess powers to bring about a new consciousness in this world. Feel how you yourself are the seed for this renewal. Yes, you carry old energies in you: fears, scars, and pain from this life, and also from previous lives. But realize there is now so much power present in you that the new can be victorious. In a sense, you are being born anew.

What happens in life is that you are first the receiver of a tradition. You absorb it as a child in your youth and even still later. In that sense, you are a victim of the past, because you are not immediately in a position to process that tradition completely, to see through it, and to bring it to the light of your consciousness. In almost every human life there will be a crisis that confronts you with choices where you are challenged and when life becomes painful. But this can be a constructive process, because your soul guides you through it. Your soul wants you to be creative; it wants to work with you so you are more in balance and harmony, so you connect Heaven with Earth, and in this way you help to give form to a new Earth.

I thank you for your presence here, and on Earth at this time. You are making a difference. I salute you.

+ - Credit Click to collapse
© Pamela Kribbe
Translation by Maria Baes and Frank Tehan
Pamela Rose Kribbe (1968) works as a psychic reader and healer in her own practice in Tilburg, the Netherlands. She obtained her doctorate in the philosophy of science in 1997, after having studied philosophy at the universities of Leiden, Nijmegen and Harvard (U.S.).
Permission is granted to copy and redistribute this article on the condition that the URL www.jeshua.net is included as the resource and that it is distributed freely. E-mail:
Source Here
CrystalWind.ca is free to access and use.
Please support us with a small gift of $11.11 or $22.22 or $33.33.
Thank you!
ॐ Namasté - Blessings!

We have 4118 guests and no members online