The Living Cosmic Rays Of Light
A+ A A- 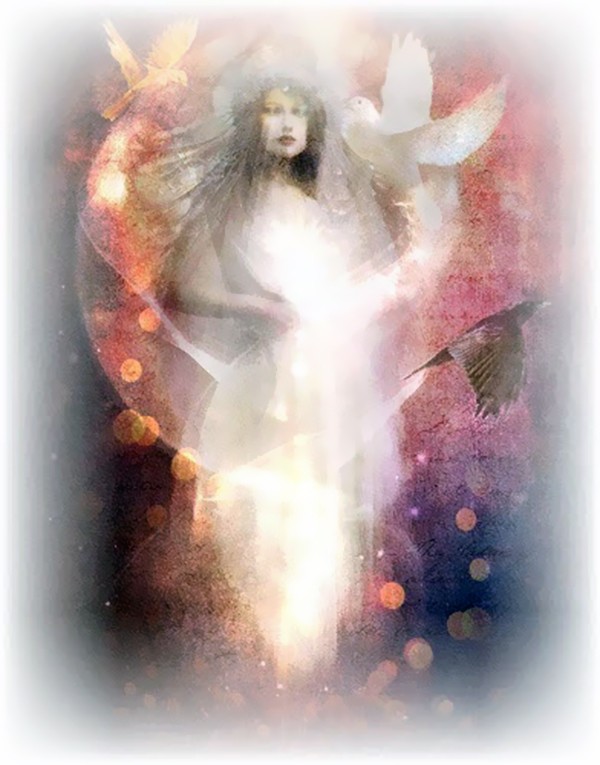 I’ve always loved birds, and we have several feeding stations in the garden so we can enjoy their presence at fairly close quarters while knowing that we’re helping to keep the ample population fed and watered. During this lockdown, however, my relationship with them has developed and deepened.

The weather has been so gorgeous that most days I can sit outside for my meditation, and this means the birds have become much more used to my presence. They will fly so tight to me now that more than once I’ve felt a wing brush my hair or face, and I frequently hear a trilling melody so close I know the singer must be perched very nearby.

I often wonder if my flower-patterned hat and my stillness make me blend in as just another plant inhabitant!

Many times now I’ve found myself awake before dawn, drawn downstairs and out into the garden to listen to the chorus that greets the dawn. It begins with one or two calls, distant in the woods at the top of the hill, then slowly but surely it ripples down into the valley where I wait, more voices offering their celebratory serenades in ever-increasing waves until the harmony surges and swells all around me in a sea of song. It brings tears of joy to my eyes, and I find my heart lifting and opening to greet the sun and a new day with the same pure passion.

I’ve had several visceral close encounters with the bird world over recent weeks which have imprinted on my mind as significant and meaningful. One was a raven landing on a post right in front of me just after dawn. I’ve never seen one come into the garden before, although I often spot and hear them fly high overhead. Immediately the thought flashed into my head that I always type CORVID instead of COVID when I’m writing about the virus! In Celtic mythology, many Otherworld beings have bird counterparts or aspects to signify their wildness or “other-ness”, and the raven is often associated with battle and death. But their namesakes are also connected with blessing, protection, and a deep magic that works beyond normal human understanding. This is a pertinent message for these times, and a reminder that an ability to hold these kinds of paradoxes in our minds and hearts is an essential skill for life in human form.

Within the space of two days, I witnessed two displays of the ruthless predatory power of the bird kingdom. The first occurred right in my own garden. I’d been observing a juvenile red kite circling quite low above me for a few days, but suddenly out of nowhere it plummeted down with wings unfurled behind it and claws extended before it, ready to snatch the careless blackbird that was singing his heart out atop the post. Thankfully, because even a second later would have been too late, the blackbird pulled off a diagonal dash into the dense hedge. I was left in jaw-dropped awe as the kite rose back up and away, empty-clawed. As a rather lovely aside, a few days later I saw this same blackbird mating with a female, so his ardent but reckless song had at least called in his lady love!

The second deathly encounter came as I drove to do my shopping. On the road ahead we saw a raven with a magpie in its beak being harrassed by two other desperate magpies. As we drew nearer, the raven lifted off and headed for a nearby roof ridge with the magpies still in hopeless pursuit. I’ve never seen either of these behaviours before, and it crossed my mind that perhaps because of the lack of traffic on the roads during lockdown the carrion eaters have far less roadkill to feast on, so are having to take advantage of easy pickings where they can find them.

Yesterday, in a rather perfect contrast, as I note the universe so often likes to present, my bird adventure involved a tiny willow warbler chick. He was minute, fully feathered but only capable of small, flightless hops, and he was cheeping loudly behind our cottage, looking incredibly lost and vulnerable to the master hunter cats of the neighbourhood. Much as I longed to scoop him up I knew this was not the wisest course of action, so I sat for a while and just observed. Sure enough a parent bird came down to feed him, and lingered nearby with a fluttering concern. I sat for perhaps another twenty minutes making sure baby stayed safe while observing Mum or Dad carefully. Sure enough, I noticed they kept returning to a certain spot much higher up the garden, and on closer examination I discovered another identical chick snuggled down there. With great relief, gloves were donned and the teeny puff of feathers, now nicknamed Houdini, was settled back in alongside his sibling. It was a joy to see Mum or Dad immediately settle into their habitual incessant food runs with both chicks now back in the home zone.

In this garden that is currently pretty much my whole world, the raven, the red kite, the willow warbler and the sparrow, the robin and coaltit…..they are all members of the community in which I live and to which I belong.

In many myths and legends, not just those of Celtic origin, birds represent the soul or spirit, the untamed part of us that remains untethered to the body and is able to soar away at will, moving between the realms. A bird can sing us to sleep, sound a healing or lull us into forgetfulness, so the ancient stories say. A bird lends us ferocity and wisdom, clear vision and joy, wisdom and magic. A bird can bring beauty AND death, and both are just as valuable and necessary.

“Once upon a time, when women were birds, there was the simple understanding that to sing at dawn and to sing at dusk was to heal the world through joy. The birds still remember what we have forgotten, that the world is meant to be celebrated.” – Terry Tempest Williams

We have 4488 guests and no members online