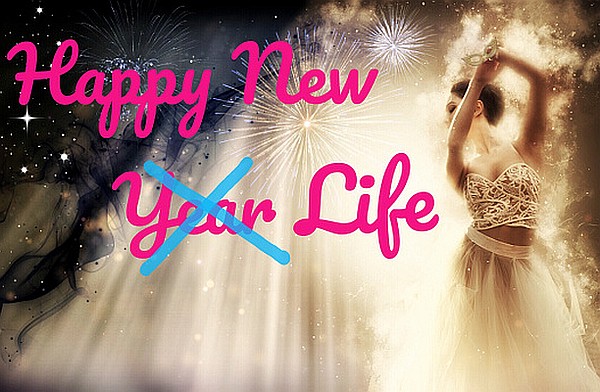 This is the time of year that we exchange, Happy New Year!  with each other. But many of us aren’t really feeling much of a difference from 2018 to 2019.  And as we go deeper into this process, we are less and less attached to time anyway.  But what we are going to be celebrating, or might want to consider celebrating, is our new life.

A life that may not look too different initially from our old one, but it sure feels different.  Hard to deny that.  There has been a gradual but unmistakable detachment from our old identity, and from the world outside our door.

We relate less and less to that world, and to many of the family and friends we were connected to.  We realize that we never really fit into that world anyway.  We tried, and we blamed ourself for not fitting in.  We thought we were doing something wrong.

Letting go of that belief is liberating.  When we realize that this world is not Master-friendly.  It doesn’t get who we are.  And, that’s o.k. We came here to bring light to a dark consciousness.

When we look at world events, it may sadden us to see how humanity is still so unconscious, and is projecting its own unresolved issues out onto others.

We have compassion for that world which means we know why they do what they do from a much broader perspective.  We have no desire to change that world.   Only to shine our light and radiate who we are, without agenda.

And we also understand and have compassion for ourselves and all we’ve been through to get to where we are today.

I enjoy talking politics with my cafe acquaintances, because it’s one area I can connect to with them.  Sometimes I even get passionate about it, but at the same time I know that it doesn’t really affect me and my life consequentially.

I know I have stepped out of victimhood.   And for most of humanity, they are still playing in victimhood bigly.

So there is the part of me that can still get triggered.  I am angry at how women are still seen as second class citizens, for example.  And I have little tolerance for bigotry and misogyny.

And, at the same time, I get that those who disown their own feminine will not trust the female gender.  That of course includes both men and women.  The planet is lopsided toward the masculine, and is still patriarchal.  There’s no denying that truth.

At the same time, the world I choose to reside in is one in which I am not profoundly affected by that misogyny.  I was, earlier on, and it had left a wound.  But this awakening and becoming conscious process allowed me to release that wound forevermore.

And that’s because I have begun as many of us have, to acknowledge that I am more than a human personality.  That we are also the I AM, the eternal self.  And that self is not wounded, or fearful.  It’s not anxious, or worried about its safety, or needing to protect or defend itself, or its identity.

That self doesn’t take things personally.  But it’s very discerning about how it wants to share itself with others.  It really doesn’t give a damn what humanity thinks about it.

That Self is free.  And that’s where we are going with this Embodied enlightenment.  We are moving into our freedom.  It’s a freedom from the old emotional baggage, from all the wounds.  And that will attract a whole different reality.

For each of us it will be different, but it will be perfectly tailored for us.

It requires a surrender that few humans are ready to allow.  They still believe they are just their personality and their mind.  But we have been moving from a mind-based to a soul-based reality.

It’s still challenging being here, for our body and our mind.  The physical body is the last to catch up, and meanwhile there is a lot to deal with on just a physical level.  But we are beginning to trust that what we need will come to us in a synchronistic way, as long as we don’t try to micromanage things from our mind.

Still, there is the emptiness, the lack of passion.

No, it’s not for the wimpy.  This is an arduous process.  For that reason, many have left the planet.  These words are nothing new for those reading them, but just a reminder that they are the few brave and capable souls that chose to go through their own awakening and their own creatorship process.

Being the creator of their own life, and harnassing their creator abilities will take more time.  Not more studying, not more processing, not more mentally trying to figure it out, or analyzing any of it…..but just more allowing.

Primarily allowing the natural joy of who we really are.  Who we are beyond our human personality.  To allow that joy to mingle with our human self, including with our body and our mind.

And to begin to not just feel that joy more and more, but to see life reflect that back to us in real, tangible ways.

For the first time, we are bringing home right here.

Meanwhile, it’s the simple things in life that we enjoy that we will take with us when we go back home….what are those for you?

We have 1180 guests and no members online