The Play of Creation through Divine Will 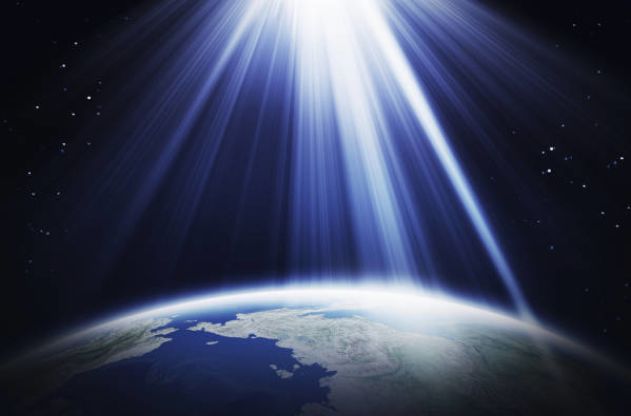 At the moment of a soul’s creation (within the Creation as all already exists), the Light of the soul throughout all dimensions is encoded by Source with exactly what roles that soul will play throughout Creation. The soul, as a fractal of Source, is a part of Source and can never not be Source. In the layers (dimensions) of Creation the soul plays a part. Perhaps it is a galaxy, a sun in a solar system, a planet, a human, an ocean etc. Every soul is playing a part, yet every soul is Source – Pure Consciousness. It is an eternal play in which one actor plays every part.

So are the roles or parts here that we each play on Gaia. In order to have our play (our world), we as Pure Consciousness inhabit a body or 7 billion bodies and agree to play a role here. No role can be greater or less than the others because it is the same consciousness playing every part. Part of the fun, or evolution of the soul, is to remember what their part is throughout all layers of Creation and eventually remember that they are really Pure Consciousness (Source, God, Creator, etc) and that they are playing every part in existence. Now the fun really begins because the soul now realizes that it is Source and it is all things. The play becomes easier to play because all is ONE. There is nothing to take personal, nothing to fight with, nothing to compete with because it is all ONE. Each role/player becomes something or someone to love because it is just yourself. The soul begins to understand that in order to have a play (Creation), Pure Consciousness must assume different roles.

This further aids the understanding that there is structure and organization to Creation. There is order to the unfolding of Creation. Without order there is chaos. If Pure Consciousness just inhabited a bunch of bodies with no programs or roles to play there would be no play. So the soul (the fractalized Light of Source) is coded with roles to play throughout Creation. This creates order and structure and allows for Creation to exist harmoniously. We have come to a beautiful time on our planet where we as souls are and will remember our roles here and throughout Creation. We will come to see that there is one Pure Consciousness, one Source that is the Creator of All. The infinite Light of Source is the Light of our souls. It is this Light that is coded with what our role will be on Gaia. We each have a part to play and every part is significant. There is no wasted energy in Creation. If a soul is created – it has purpose. We all have purpose.

As we remember what our roles (purpose) are here and we remember that we are Pure Consciousness playing these roles, we naturally align to the Divine Will and flow of our evolution. We will embrace Divine Organization as it begins to make itself manifest on this planet. This is already happening beloveds. So many souls have remembered and now the collective consciousness of Gaia is ready to remember. The Divine Organizational structure that will support this is forming on this planet. The souls (Pure Consciousness) that play these roles are stepping fully into them and complete disclosure of this structure is coming to the collective. It is important to understand that these souls are playing their part in Creation just as all souls are. All are Pure Consciousness as the actor and the soul/person is the role. It is best to always remember that behind the vessel is the same consciousness in all beings.

Our play is ready for the next act, the story of Earth is about to take an exciting twist and we as the players in this play are making this happen. Some of us know our roles and some of us do not yet. Its ok, because soon we will all remember. As we move forward with the next act of our play, much will change. Just as a scene change happens when the acts change in a play at the theater. Many in key roles to support and guide the collective through this change will be making themselves known. There is a structure to this play and it will be made known to all as it unfolds. We are all ONE beloveds. Each playing their role here. We are in for a great change as we work together to change the scenery for the next act of our Earth story.

The next act is a love story. A story where all beings remember that they are love and no one gets hurt again. A love story where we all have what we need and there is only a happy ending. So wear your mask and play your role here with love and excitement beloveds. This is one show no one will miss. We are here to play the play of Creation as ONE Pure Consciousness in seven billion bodies evolving an entire star system. Your role is important and needed for us to build our New Earth. Never underestimate who YOU are beloveds. Allow Divine Will to flow through your vessel and deliver you to New Earth. The power of Divine Will is unmatched in Creation.

In a single moment, Divine Will (the Creator) created all of Creation. Every soul that would ever exist, every action that would ever take place, whoosh, all created in the blink of an eye. All created and all exists in the eternal now. It is a power unable to be fully conceived by the human mind. Divine Will is the most powerful force in all of Creation, it is the Creator itself speaking. When Divine Will is ready to move this collective ascension forward it will happen in a way no one would think possible. Divine Will is infinite and all powerful. All matter moves, bends and obeys Divine Will when it commands. Don’t trouble the mind with how this ascension will happen on a collective scale. Instead, have faith and surrender to Divine Will and you will become part of the magic and miraculous force that will change all on this planet. For all can wake up in the blink of an eye when the Creator is ready. Never underestimate the power of Divine Will.

Have faith that we are being delivered to a New Earth. How each chooses to evolve once we get there is coded in the soul. However, waking up and moving to the frequencies of New Earth are set for each and will activate in the hearts of all at the right moment when Divine Will is ready to ignite the flame within the hearts of the collective. The time has come to surrender, trust and have faith beyond anything you have ever had for we will all see the unfathomable power of Divine Will upon this planet in 2020. There will not be one soul left on this planet that does not know the complete truth in their heart. This alone will create a ripple affect through the collective consciousness of Gaia that will propel us into a collective ascension.

Prepare your vessel, purify your bodies, your mind, your everything beloveds. Make way for the bridegroom that is coming. Prepare a place in your hearts for the ignition of the flame of God. The time is NOW! It is written and so it shall be. Let Divine Will come forth on this planet and light the way home for all. In 2020 all shall receive 20/20 vision, the sight of the heart that sees and knows the truth and we shall all move forward as ONE to collectively ascend this star system. BE at peace beloveds. BE in Joy. BE Love! I love you all.

Gaia Sophia is a Wayshower and Pure Source Conduit in service to the current shift in consciousness on planet Earth known as Ascension. She shares her own experiences through the unified field of love. Offering higher perspectives and knowledge to assist others in transcending programmed limited beliefs and thought patterns that prevent one’s heart from fully opening.
Source Here
CrystalWind.ca is free to access and use.
Please donate a small gift of $11.11 or $22.22 or $33.33.
Thank you!
ॐ Namasté - Blessings!