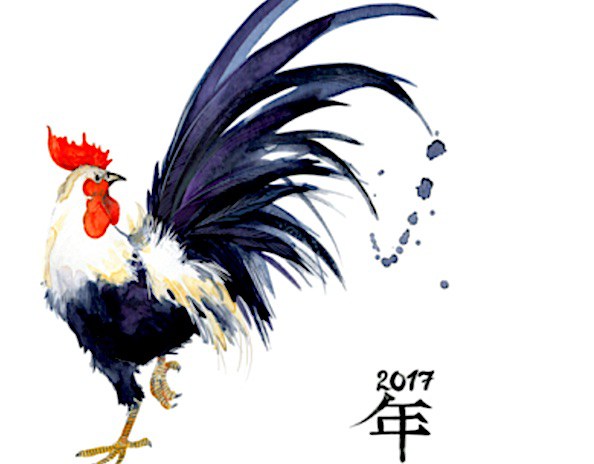 The Chinese New Year begins on the first New Moon of the year, which is January 28th, 2017.

Last year was the year of the Fire Monkey, which brought many surprises and unpredictability. A lot of people felt all over the place in 2016 but now in 2017, things are going to feel more grounded.

The Rooster is an organized, practical and grounded animal that likes to plan and take calculated risks. While the Monkey is all about the element of surprise, Rooster energy is more about making planned decisions.

In 2017, it is going to be necessary to plan your next move and to start thinking step-by-step what you want to achieve and how you are going to achieve it.

The Rooster is often the leader and commands the respect of all the hens, making 2017 a perfect year to step up and take responsibility for the direction of your life.

The Yin energy also gives 2017 a feminine quality. While you will be required to do some prepping and planning, you will also need to trust and follow your instincts and intuition.

In fact, if you want to strengthen your intuitive muscles and learn how to trust your instincts, the Yin Fire Rooster will definitely provide support.

According to many Chinese astrologers, Yin Fire can be an extremely volatile combination.

Yin energy is often associated with water and metal, but when put together with fire it has the potential to be extremely destructive. Yin Fire can also indicate wars, terrorist attacks and economic corruption.

If any animal can handle the energy of Yin Fire however, it is the Rooster. With the Rooster’s practical and methodical approach it has the ability to take this Yin Fire energy and keep it under control.

When Yin Fire is under control it can actually lead to peaceful resolutions, a tempering of anger and a soothing of any conflicts. It is also a wonderful energy for female empowerment and more women may be in the spotlight this year than ever before.

On a personal level, the year of the Yin Fire Rooste may help you to solve issues or complex problems in your life. It may even help to bring clarity to issues that have been causing you anger and stress.

When you use this energy effectively, it will also help you to stay productive and to make great strides, especially in your career.

The year of the Yin Fire Rooster has also been labelled the year of awakenings and this is also playing out in Western Astrology as well.

We all know that the Rooster cock-a-doodle-doos in the morning in order to “wake up” all the other animals.

In 2017, the Rooster is going to give all of us a much needed wake up call that is going to help us to further explore our intuition and to look at the areas of our lives that need to be rebirthed or transformed.

As we move through this year of new beginnings, more and more people are going to be called to awaken and the Yin Fire Rooster is going to be helping and supporting this journey.

The Yin Fire Rooste may be volatile and destructive but it is also extremely powerful and strong. When this energy is used effectively, there is no problem that can’t be solved, no intuitive message that is too complex to understand and no dream too big to conquer.

Want to stay up to date with the cycles of the Moon? Download my Moon Calendar which includes dates for the new and full moon plus astrological signs.

Tanaaz
Tanaaz is an intuitive coach, astrologer and the creator of Forever Conscious. Originally from Melbourne, Australia, Tanaaz now lives in Los Angeles, USA.
Source Here
back to top

We have 1058 guests and no members online