Ancestral Herbalism And Samhain: Working Deeply With Rosemary
A+ A A- 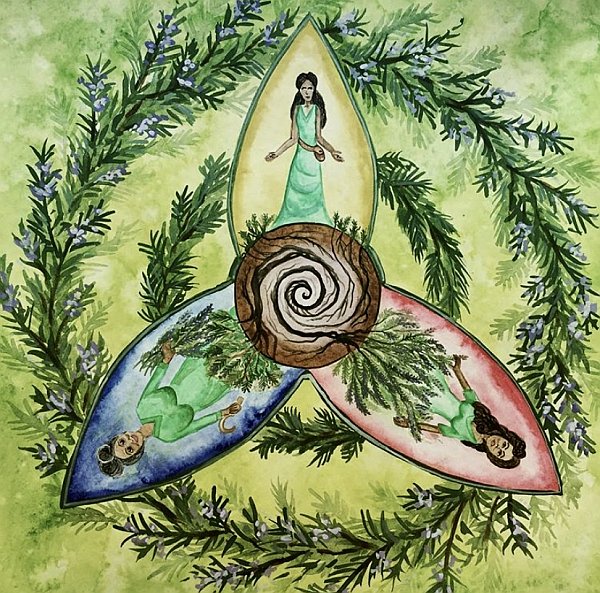 As we quickly approach Samhain, it is a useful practice to spend some time with rosemary (Rosmarinus officinalis) and build her into your Samhain practices. In this post, we look into some of the magic and medicine of Rosemary, and I share a number of ancestor and Samhain-focused practices that you can use with Rosemary.

Before we get into what you can make or do with rosemary, let’s spend some time exploring and understanding this ancient herb. Rosemary has been with humanity almost as long as we have written records. Native to the mediterranean region, rosemary was first found referenced on cuineform tablets from Ancient Egypt that are from 5000 BCE–thus, humanity has at least an 8000 year old relationship with this herb (but I suspect it is much longer than our written history!). It was spread to China as early as the 2nd century CE, and to Europe in the middle ages.  It came to North America and South America in the 1700s and now has global reach.

The “officinalis” in Rosemary’s latin name indicates that this was an herb used as of the materia medica in ancient Rome and beyond. While Linneaus in the 18th century came up with the Latin taxonomy of naming plants, and thus gave Rosemary her official “officinalis” designation, the uses of this plant go back quite further.  In fact, the term “rosemary” derives from Latin, ros marinus (“dew of the sea”).  Even the word itself has a wonderful history.

Rosemary has been considered by many cultures as a sacred herb tied to memory and remembrance, and love. This was certainly known in Ancient Greece and Rome as well as in much of the other cultures in the Mediterranean, where rosemary was used both for weddings (in the form of sprigs or wreaths) as well as for funerals to honor the dead.  It is burned as incense, used in cooking, used as medicine and used in funeral ceremonies–a tradition that continues to modern times in Australia and other nations. Thus, you might say that Rosemary is an ally to us both in life, and in death. 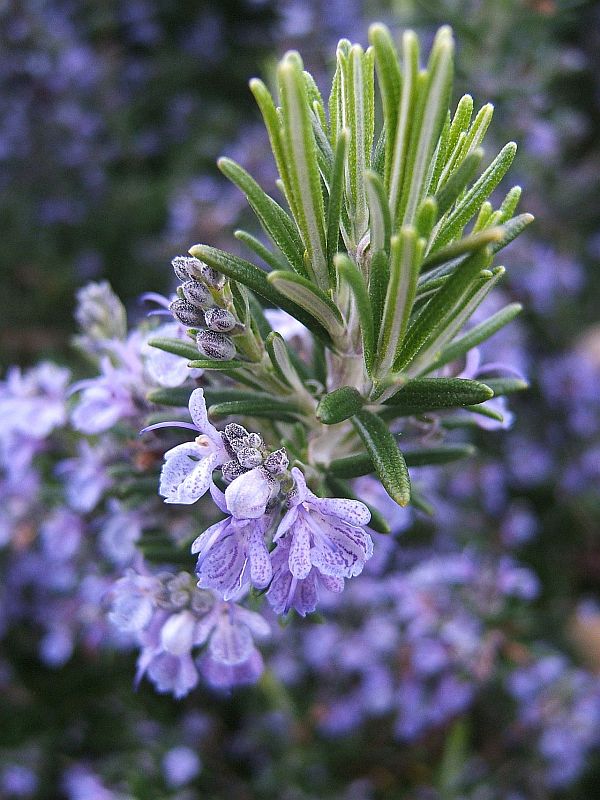 Grieve speaks of the different rosemary customs in her entry in A Modern Herbal, particularily surrounding memory and rememberance. This is a common and well known use, such as represented in Ophelia’s line in Hamlet, “There’s rosemary, that’s for remembrance. Pray you, love, remember.”  Many herbalists recognize the usefulness of rosemary both for strengthening the memory, but also working with us a plant spirit ally in helping us remember. Memory can be a fickle thing this day and age, especially with phones rather than our minds and hearts doing the rememberance.  Rosemary, thus, is a potent ally for us, particularly at Samhain when reflecting back, honoring the past, and honoring those who came before us is central.

Rosemary is also an incredible herbal ally. Pliny the Elder was one of the first to write of Rosemary and its many uses.  Modern herbalists recognize rosemary as useful both as an essential oil as well in its plant forms.  Every part of the plant can be used medicinally. Both the oil and the herb can be used as a carminitive, that is, offering beneficial and healing action on the digestive system and aiding in the reduction of gas and digestion of food (in fact, you will find that many culinary herbs aren’t just for taste, but have these same kinds of actions–which is probably why they were traditionally used in cooking!)   Rosemary, in tea or tincture form, can also be used to help calm the nerves.   Finally, rosemary is very useful in a hair wash to strengthen the hair and encourage new hair growth (I use a vinegar infused with rosemary often!)  Research has also shown that rosemary oil can be used to increase alertness and cognitive function, which is pretty cool!

There’s a lot more that could be said about rosemary’s virtues, but I think you get the idea–Rosemary is an amazing Samhain herb for so many reasons.  So let’s get to some of the stuff you can make and do with rosemary as a focal herb for this time of year. 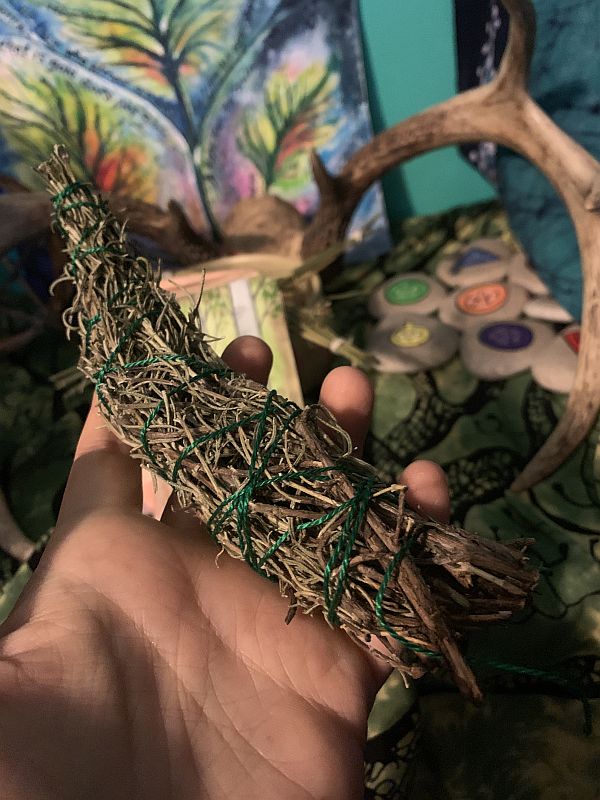 Rosemary (on its own or combined with other herbs) make fantastic herbs for doing any kind of memory work or clearing work. Make sure you use fresh rosemary for your smudge stick making–dried rosemary is brittle and easily falls off the branch. I usually gather up rosemary in the weeks before hard frost (for me in Western Pennsylvania on the US East Coast, this is usually 1-2 weeks before Samhain arrives).  Some I save for culinary use, and the rest I use in smudge stick making. I have full details for how to make your own smudges and a list of recipes for smudges. For Samhain, and ancestor work, I like the following combinations:

If you are growing rosemary itself, don’t overlook the roots as another useful part of the plant for incense and smudges–it has a more woody and deep aroma and is excellent!

Rosemary Oil for Visioning and Past Life Work

You can construct an herbal oil using rosemary leaf and rosemary essential oil that excellent.  I like to use a combination of rosemary and borage for this work, but you can use other plant combinations.  To make your oil, crush fresh or dried rosemary and borage and place in a small mason jar.  Cover the jar with fractionated coconut oil (prefered over olive oil for this recipe, but you could also use almond or olive oil–whatever you have around).  Wait 1 week (for fresh herbs) or one moon cycle (for dried herbs) and then strain.  For a bit of added punch, add rosemary essential oil (2% dilution, or about 10-15 drops per cup of oil).

Keep your rosemary oil in an oil roller or jar and rub on your temples and heart for any kind of visioning or past life work.  It also doubles as an excellent “memory” oil for wanting to jog the memory or wanting to hold something important in your memory and not lose it.

Rosemary Tea for Tea with the Ancestors

One of my very favorite Samhain traditions is to invite my ancestors to tea.  For this, I typically make a tea of three herbs: rosemary, lavender, and mugwort (small amount of mugwort because it can be bitter) and I sweeten it with honey.  To make the tea, boil water, add your herbs (about 1/2 tbsp of herbs per cup of tea), let seep for 5-10 min, and then strain and stir in your honey.

The ritual is simple and can be performed anytime around Samhain (I like to do this Samhain eve).  To set up the ritual, you will need a teapot and two teacups and candles.  I start by  then light a candle and leave it in my western window (also traditional).  I light candles around my space and place a blanket on the floor for me to sit on.  You should also have a large empty bowl. 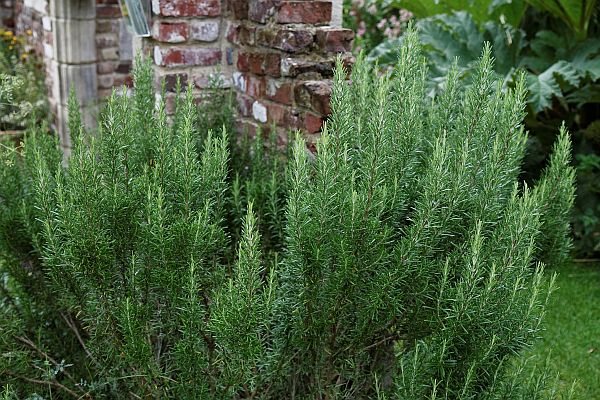 To begin the ritual, I open up a sacred space (using AODA’s Solitary Grove ritual) and when opening the space, indicate that the sacred space is traversable by any ancestor who wishes to visit.  I then pour myself a cup of tea and wait. When an ancestor arrives, I likewise pour them tea and we sit and converse using spirit communication techniques (if you haven’t yet honed your skill in this area, a divination system like an oracle deck would work great).  After we are done conversing, the ancestor has taken their tea energetically.  I then pour it into the bowl and see if another ancestor wants to come and have tea.  I have met many fascinating ancestors this way–of land, tradition, blood, and bone.

Samhain is one of my favorite times to really “cook” for a festival, particularly cakes, breads, and other doughy goodness.

If you are lucky enough to have chestnut flour available (which you can create yourself if you have access to some chestnuts), this is an amazing cake for Samhain that combines rosemary with the hopeful and strong chestnut.

For those who aren’t off hoarding and cracking chestnuts, I highly recommend this rosemary bread that you can make in a dutch oven.

Rosemary is such a powerful and potent plant ally for us, particularly at Samhain.  Dear readers, I would love to hear your thoughts and experiences with Rosemary.  Let me know if you try anything here!

Dana: I’ve been practicing druidry for almost 15 years–Revival Druidry is my home and path. I am a Druid/Bardic Adept and the Grand Archdruid in the Ancient Order of Druids in America (AODA) and a Druid-grade graduate of the Order of Bards, Ovates and Druids (OBOD).  In 2018, I was made the OBOD’s Mount Haemus Scholar for my research on cultivating the bardic arts.

Point of No Return

Manifestation, Illness, and the Ego

June 2020 And The Shattering Of Illusions

Receive Your Upgrade Now - Teachings of The Masters

We have 1394 guests and no members online