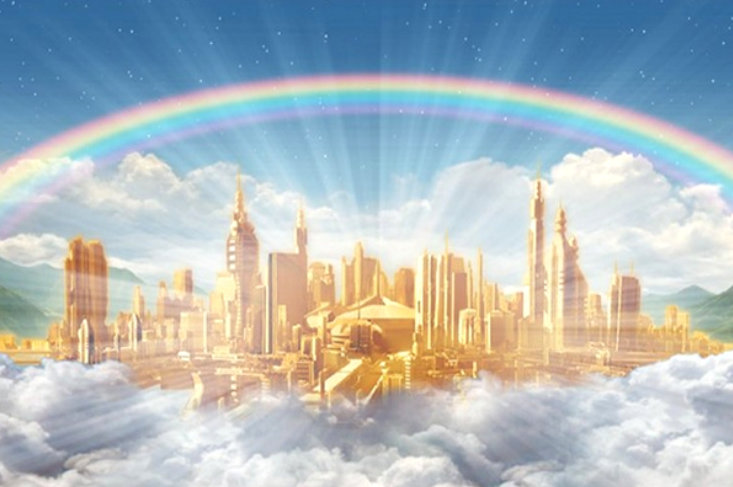 There once was a glorious many-roomed mansion named the House of Briony. It was a fine piece of original architecture, standing tall and pretty on a vista overlooking the sea and deep green valleys. It was much admired, and many people spent joyous times sharing the space; each adding their own flavor to the furnishings until the mansion was an eclectic mix of many different personalities. Over the years, the house became eroded and battered in places. It was patched up again and again with plenty of effort but little skill. A beauty, as long as you didn't look too closely.

Then one day the sunlight hit the house in a particular way, and a sparkle was born in the very fibers of the building. This sparkle grew and grew until it became an entity of its own, and called itself Love. In the presence of Love, the mansion began to shine with a luster even better than new. The furnishings left by others began dissolving, leaving only the grand finery of the original architecture. Room by room, Love entered and cleaned out the darkest corners, the dirtiest closets, the most cobwebbed nooks and crannies. Ghosts came out of those rooms, and while they initially resisted, they eventually found a previously unknown solace in Love's presence. They shared precious minutes, hours, days together in each of the rooms until these ghosts found themselves alive once more, alive and glowing with light. They merged with Love and continued their refurbishment of this magnificent mansion, the force of Love growing stronger and more beautiful with every new addition.

Love eventually restored every room to perfection, but while the house became more and more glorious, there was a weakness and darkness in its very foundations. Often rumbles would shake through the walls, causing paintings and mirrors to fall down. One day Love discovered a hidden door to a basement that had been locked away for countless years. When the door was finally opened, out came a force of Fear so strong that it pushed Love right out of the house. While Love had been able to co-exist with the smaller closet-ghosts, it now found that this new entity was so monstrous that it filled every spare inch of that glorious mansion.

Day after day, the Fear would creep out of the basement door and run ramshackle through the newly refurbished rooms, invading every corner with its darkness. Love sat patiently on the porch each time, humming and smiling and waiting for the stampede to be over. Each day Fear would retreat back to the basement and Love would re-enter the house, picking up the broken pieces and restoring the damaged walls to new. Sometimes it happened several times a day. Like a battered lighthouse on a stormy coast, the house stood strong against this relentless stream of attacks; knowing that eventually Fear would tire of these games, while Love burned with an eternal energy that would never run dry.

After twenty-one violent days and nights, Fear slunk once more out of the basement and this time Love stood just inside the front door and said "I can leave right now, but say the word and I will stay with you and we will heal together". And Fear crumbled to the floor and howled with pain and relief as Love cradled its weary body, breathing divine light into its very core. Fear wept for days on end, finally understanding that Love never judged it, never hated it, never thought a single bad thought of it. Love brought nothing but compassion and understanding to their union. Love held no grudges for the damage caused. It was a tremendous time. The mansion itself sobbed with relief at seeing Love and Fear able to co-exist within its walls, knowing that the battle need not be a battle any longer.

As Fear's trust grew and grew, it too began to merge into the light that Love offered so freely. Inside the light of Love there was room for all, total inclusion. It was only Fear that caused segregation, pushed others away, demanded all for itself. Love told Fear that it didn't need to live in the basement any longer, it was just as welcome in the glory of the mansion as anyone else. Fear began spending time in every single one of the many rooms, and occasionally would forget and wreak havoc on the walls and furnishings once again. But Love would just smile and forgive without a second thought each time, and patiently repair the damage. The basement was cleaned out and turned into an underground swimming pool with fountains and steam pools, one of the greatest features of the mansion.

As Fear merged more and more with Love, it took up less and less room inside the house. Love infused every last corner, and the whole mansion glowed like a heavenly palace. One day Fear caught its reflection in a mirror, and was astounded to see not a big dark demon looking back, but a small pensive child. Love appeared behind the little one and smiled. "This has been you all along, it was only YOU making yourself out to be such a monster." With those words, Fear laughed and cried at the same time and rushed into the open arms of Love, never to leave that embrace again.

The mansion soon became the stuff of legends, a celestial palace of such heavenly brilliance that it instantly healed everyone who stepped foot in its door. More and more people came to stay there, and Love welcomed every one of them like long lost friends. When the house became filled up, more rooms magically appeared, and eventually the mansion expanded into a whole kingdom. Every person who stayed within its walls took a piece of Love back with them and transformed their own houses into palaces of light too. Every time one of these Love-beings saw a Fearful one standing outside in the shadows, they would welcome them into the family of light with the utmost joy. Over time, the kingdoms of light around the Earth became so large that they joined up, leaving not a square inch or single soul left in shadow.

As the last drop of Fear was merged with the now mighty force of Love, the whole planet exploded in an endless moment of sheer bliss. When everyone opened their eyes again, they saw that they were indeed inhabiting heaven on Earth.

Star Soul, Earth Body
Briony Louise Corrigan
"Keep your eyes on the stars and your feet on the ground" - My wild, crazy, beautiful and raw journey of Ascension on Earth
'm a free spirit on an exciting journey of self discovery and conscious evolution. I live in paradise with my gorgeous husband, I'm an outgoing-introvert and an empath. I value honesty and authenticity above all so you can count on me to speak my truth and say it straight. I love to write more than anything and it means the world to me that people enjoy following my journey. Thank you for visiting my blog and walking down this extraordinary path with me. I'm so happy you're here. Whangamata, New Zealand
Source