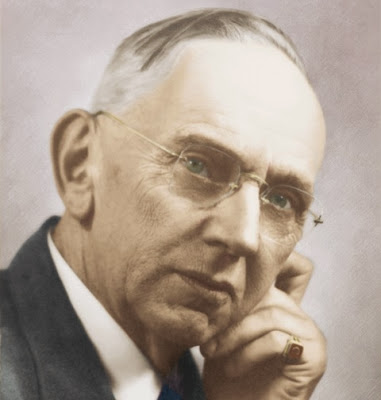 Edgar Cayce had a nondescript early life, only being able to afford to go to ninth grade. He studied the Bible daily. At one point, he lost his voice. A stage healer offered to hypnotize and heal him, so he accepted. When he was in trance, he could speak, but not out of trance. So, the stage healer tried to make it so he could speak any time, but still he could only speak in trance. Although the hypnotist left town, Cayce continued to work with a local one who told him in trance state to describe his ailment. Strangely, Cayce described his illness in first person pleural, saying "we" instead of "I." Eventually, he healed himself in trance state.

He went on to deal healing readers for others in his town. He was able to work in the healing position the rest of his life. His wife and son sat in as the hypnotist for him. He became more and more popular and well known.

He said that he accessed the Akashic records (an etheric body of all universal knowledge). He often read past lives and spiritual aspects, as well as physical.

He was a huge advocate of Atlantis with great detail, as well as claiming "'soul entities' on Earth had intercourse with animals to produce giants that were as much as twelve feet tall."

According to Cayce, Atlantis was destroyed by volcanic and earthquake-like 'explosions' on three distinct and widely-separated occasions. And each of these destructions lasted over a period of months or even years, not just days or a single day! The first of these disasters appear to have taken place about 50,700 BC, the second about 28,000 BC whilst the third and last one around 10,000 BC. All the readings indicated that ample warnings were given and than many Atlanteans were, in fact, able to escape prior to each disaster. Some traveled to Europe and Africa whilst some found refuge in South America. (**Might this explain unusual pyramid technology in different regions around the world - the one common denominator?**)

Those members of the Law of One - who had remained uncorrupted - took charge of arranging for the 'transportation' of those Atlanteans who were 'allowed' to leave. The Law of One also ensured that the records of knowledge and understanding were 'hidden' in the Sphinx and certain precautions were activated to make absolutely certain that these records would not be re-discovered for many thousands of years until the time was 'right' . . .

Was Cayce a prophet? The sad thing about such amazing talents is that during their own times, people are afraid of something new and novel. They don't pursue it until later on when in retrospect their work was exceptional and by then, the moment of action is gone. Luckily, Cayce had a stenographer and kept massive records. He can be respected for opening our minds and our concepts of time and Akashic records.

All souls were created in the beginning and are finding their way back to whence they came.

He who understands nature walks close with God.