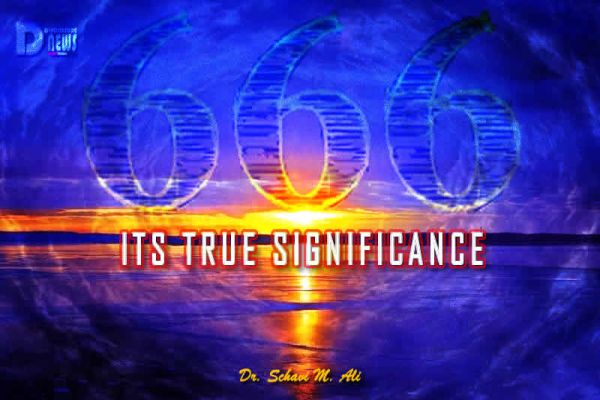 Most people are aware of the biblical verse which discusses being wary of the number “666” (six hundred sixty-six) in the chapter of “Revelation”.

People have endeavored to attach it to specific people over many eras of history and have debated its message constantly trying to make it be a particular person of evil inclinations.

However, the number “666” refers to a type of consciousness—not to a specific person.

In Kabbalah, the number “600” is the letter MEM which is a name for the element water, and which signifies emotions which can take us to the depths of human individual as well as collective consciousness.

Its message is that we each harbor realms of deep feelings and intuitive knowledge which we must deal with and not ignore or suppress them.

Many have probably heard of the phrase: “The Spirit moves on the face of the waters”—an ancient teaching.

It is normal to feel certain emotions about particular events—either personal or collective (such as with political issues or sociological happenings); however, we must understand why our emotions are activating, and whether or not they are truly a part of our intuitive guidance or whether they are out-of-control dynamics.

As we know, water can either cleanse or it can overflow and be destructive.

When we pray and meditate for guidance as we are feeling certain emotional responses to events, we can connect with SOURCE and receive sacred messages that will heal and make us aware of why we are feeling a certain way.

Therefore, MEM is “be aware that emotions are either escalating us to higher realms of intuition or are sinking us into erratic mental states and behaviors.

We must venture into the depths of the HIGHER SELF–the SOUL—for truth”.

The number “60” is the letter SAMECH whose message is: “A Higher Power controls our mission on Earth, and its Divine energy permeates the cosmos”.

In other words, we must realize that Divine Support is always available to us.

The number “6” is the letter VOV, and its message is: “Every self-contained object has six dimensions: above, below, right, left, front, back. Everything that is seemingly separate is actually connected”.

An example is the human being.

In the physical sense, we are all of differing shapes, sizes, skin colorations, hair textures, bone structures, etc. Yet, we are all considered to be human beings (regardless of the sociological terms such as African, European, Middle Eastern, Asian, etc. which were created by those who wanted to keep humans separated).

Without going into archeological detail, people look differently because SOURCE made them to be so.

There is a lovely verse in the HOLY QU’RAN where God says: “I made you different so that you would know one another, not despise one another.”

In terms of the earthly experience, the various so-called “races” developed over a long space/time continuum as humanity journeyed out of the Olduvai Gorge of East Africa into other parts of the world where climates were different.

Thus, physiological changes were the result of the journeys over billions of years.

Yet, we must remember that this is only our earthly heritage because we are originally “Cosmic Beings” from numerous galaxies and universes—all of which are from SOURCE FREQUENCY.

People have been gifted with free will, and in Kabbalah, it is taught that the various numbers can have either a high energy or a low energy based upon thoughts, feelings, words, and actions—-all stemming from levels of consciousness.

So, let us contemplate the two levels of the number “666”.

It is 1.) Venturing into the depths of the SOUL—the HIGHER SELF— where our spiritual truth resides because the SOUL is the HIGHER POWER which governs creation, and all of creation is from the one SACRED SOURCE. Creation is not separate from the CREATOR.

or 2.) Those who willingly separate themselves from the CREATOR in the belief that they have created themselves and are, therefore, GOD, are misusing their free will, are not connected to the HIGHER SELF, have a low level of consciousness which will result in chaos and even complete destruction over time.

Such beings are within the earthly realm and are indeed working havoc in Nature and on others of humanity.

These are the ones that we must be wary of associating with and of becoming involved in their vicious and evil schemes to control and to manipulate what SOURCE has created.

Therefore, to reiterate, the number “666” as it is discussed in biblical writings refers to a type of consciousness that has run amuck in the world and which has disconnected from SOURCE FREQUENCY.

It is not a specific individual.

It is comprised of many, many such persons.

The number “666” can be of either a HIGH or a low vibration.

It is a collective energetic vibration.

Erratic political leaders, sinful religious people, misguided scientists, shady businesspersons, and more—anyone and any group which has disconnected from SOURCE FREQUENCY has fallen to the depths of the disharmonious aspect of “666”.

However, those who are leveling up to spiritual understanding are in the HIGHER vibration of “666”.

Remember, the word “man” is from the Sanskrit term “manas” which translates as “mind” and as “consciousness”.

Thus, to be a “man” is not to be specifically a male or a female.

It is to have a certain type of mindset or consciousness.

When SOURCE made “man” in “ITS” image, this is the message that we were created with “consciousness”—the capability of using our electric frequency of thought to create our experiences.

Just as we are “lights” of the LIGHT, we also have “consciousness” from the SUPREME CONSCIOUSNESS.

We can remain connected to “IT” or we can misuse our free will and disconnect if we so choose.