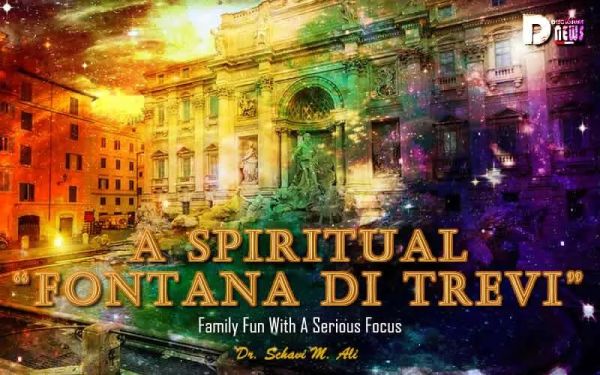 “Fontana Di Trevi” (Trevi Fountain) is located in Rome, Italy and was designed by Italian Architect, Nicola Salvi, with work beginning on it in 1732 and completed by others several years later.

“Fontana Di Trevi” is located in the center of De’Crocicchi, Poli, and Delle Muratte streets.

Traditionally, those who were seeking love would turn their backs to the fountain and toss three coins (one at a time) with their right hand over their left shoulder into the fountain.

If the coins successfully landed in the fountain, this supposedly meant that they would find the perfect lover and be married in Rome.

People around the world have always favored fountains as a type of “wishing well”.

As is now understood by most people relative to the powers of consciousness, whatever we focus upon and visualize can become physical reality as the electrical frequencies of thought and the magnetic frequencies of emotion conjunct.

In terms of the science of “Physics”, frequency is defined as the number of waves that pass a fixed point in a unit of time or the number of occurrences of a repeating event.

Looking at ourselves as a “fixed point” and our thoughts as “energy waves”, when we consistently focus upon a particular desired outcome, we are creating “energy waves” which can then magnetize to our emotions.

With so much density in the “3d” perspective of our planet due to what is continually discussed on television and radio news channels dealing with politics, philosophies, social structures, economic issues, medical turmoil, and more dissonance, we can “LIGHTEN” our personal worlds by creating a “Family Fontana Di Trevi” which has a spiritual focus of COLLECTIVE PLANETARY LOVE, PEACE, and HAPPINESS.

To erect a family fountain either inside in a special area or outside in the yard, obtain a large edifice like a bird bath or if necessary, just place a large beautiful wide glass bowl on a table. Fill it with water.

Next to the created fountain, place a container with lots of pennies in it.

Once a week at any one of the auspicious hours of Dawn, Noon, or Sunset, each member of the family (facing the fountain not turning their backs to it) is to toss a penny into the fountain while envisioning LOVE, PEACE, and HAPPINESS on Earth/Gaia.

Friday is suggested because it is the end of the traditional week prior to the beginning of the weekend of Saturday and Sunday.

The envisioning may be in the form of a brightly glowing LIGHT enveloping the planet, or a pink ray representative of DIVINE LOVE embracing the planet or hearing the sound of AUM (also known as OM) blasting forth as our planet is emblazoned with LIGHT, or any other visualization that is preferred which symbolizes the words mentioned above: LOVE, PEACE, and HAPPINESS.

After the visualization, each person should silently recite a preferred prayer or mantra, take a deep breath, and then proceed with the activities of the day or evening.

It is also good for families to engage in discussions at the close of the “fountain” day about how has each person has endeavored to send out LOVE, PEACE, and HAPPINESS throughout the week.

In other words, how has LIGHT been sent out into our environment since each of us is a “light” of the GREATER LIGHT?

At the end of a month, perhaps the pennies can be taken out of the fountain and placed in a special treasure box as symbols of “wishes” made or they can be gathered up and exchanged into dollars and added to other monetary sums and gifted to a trusted charity.

Spiritual rituals are particularly powerful during a Full Moon portal (usually three days before, on the day of, and for three days afterwards).

However, because the height of the Full Moon of March 2022 arrives on the 18th—just two days prior to the Equinoxes (spring and autumn in the hemispheres)—this Full Moon will be very strong in its activations of emotional settings throughout the year.

It will occur in Virgo in the Tropical Zodiac (work-related situations, service-oriented issues, and health enhancement opportunities) and in Leo in the Sidereal Zodiac (issues with leaders, social functions, creative enterprises, and concerns regarding children).

All of these topics will be the vibrational focus throughout the year.

A “Fontana Di Trevi” weekly ritual is a fun manner is which to deal with personal and planetary wishes, especially with enormous amounts of LIGHT continually coming into our galaxy and planet from the Photon Belt, the Great Central Sun, Solar Flares, and Coronal Mass Ejections—all of which are upleveling our DNA and transforming cellular records in an exponential manner.

Often, as has been broached in previous articles, Full Moon portals tend to open earlier as certain conditions become chaotic from the “3d” perspective.

All Full Moons heighten emotional responses, but due to the dire situations that have unfolded in the past two years on our planet (particularly because of the “virus” and the “vaxx” and now the Russian and Ukraine warfare), the portals do seem to open their cosmic doors earlier as human thoughts and emotions surge, and accordingly, cosmic LIGHT pours into our solar system with stronger pulsations for cleansing and consciousness elevation.

Sometimes people feel as if being spiritually oriented requires having a furrowed brow and being relatively quiet as if being on a permanent personal retreat in an ashram on a mountain.

The opposite should be the case.

This does not indicate that there will not be times when it may become necessary to “stand one’s ground” when certain persons attempt to engage in debates without studied knowledge or may try to cause others to fall into some misery that they are themselves within, but those who are sincerely trying to help to elevate planetary and galactic consciousness are protected and guided by aspects of SOURCE in terms of what are known as AVATARS, SAGES, PROPHETS, ASCENDED MASTERS, and ARCHANGELS.

As just one spiritual text asserts: “Those evolving in consciousness will see and sense LIGHT around them as a sign of the presence of spiritual energy which is the presence of the DIVINE” (LEAVES OF MORYA’S GARDEN).

So, those who are doing spiritual service should “LIGHTEN UP” and travel “LIGHTLY”.

Anybody for creating a “FONTANA DI TREVI?”