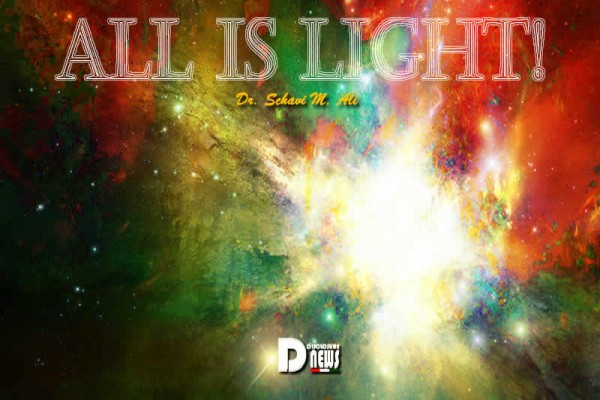 It is now officially autumn or spring in the Northern and Southern Hemispheres respectively.

As the seasons shifted, The Sun exploded with two strong “M-Class” solar flares (an “M.2” and an “M.3”), and two coronal mass ejections also soared out into the solar system.

Along with these cosmic forces, Earth/Gaia is traveling through a “Helio-Spheric Current Sheet” where opposing magnetic fields are sending shock waves to the planet.

The entire cosmos, also known as the multiverse, is comprised of LIGHT that is orchestrated in its Divine symphonic tunes by our SOURCE who is referred to by many sacred names throughout the plethora of cultures and languages of our planet but who is above all of these names as the INFINITE PRESENCE, the DIVINE ABSOLUTE, the ALL. There is organizational structure in the cosmos.

The trillions upon trillions of stars surge with LIGHT just as the planets and the Sun and the Moon do.

The LIGHT transmits energetic frequencies and literally forms our DNA.

As such, we are comprised of the same substances as the stars!

Our Spirits (Life Force) and Souls (Higher Super-Consciousness) are encased in a molecular structure with atoms and subatomic particles and numerous other material formations which form our cellular records which, in turn, form our muscles, glands, organs, and tissues—all of which create our individual “Earth Suits”.

Think about the popular “Star Trek” television series which has been in syndication for several years.

When the members of the starship called “Enterprise” “beam-up”, their forms are sparkling particles of LIGHT which re-materialize when they arrive at their destination—be it another planet or back aboard their ship.

Yet, they are all representative of various Earth races as well as entities from other planets.

Everyone looks different and has a different coloring to their skin, but when they change into LIGHT, there are only brightly twinkling energetic particles which gradually disappear until they re-materialize wherever they are going.

Interestingly, when Gene Roddenberry first offered his idea of “Star Trek” to the television moguls of Hollywood many decades ago, it was rejected.

They felt that his scripts were ridiculous and would never be accepted by the viewing public.

However, a producer eventually took a chance on the series, and to quote a cliche phrase, “the rest is history”.

It is now one of the most popular television programs, and other “Star Trek” programs have been created from the original one as well as movies.

Much of the television series as well as the movies have profound information regarding what is actually occurring in our “Now” as we reflect upon the amazing scientific happenings which themselves are predicated upon ancient spiritual revelations.

Consider this ancient axiom: “God is LIGHT, and all things come from LIGHT” (Tehuti, EMERALD TABLET).

Here is another sacred verse to ponder: “LIGHT in me be!” (spoken by the Divine in the TARGUMS which is the holy book of Ethiopia, and the verse is translated from the original Amharic language). The term “Targums” translates as “Teachings”.

In ancient Kemetic temples in the land of the pyramids, when students advanced to the highest degree in the curriculum of “Kem Sesasta” (“Potent Mysteries”), they were given the title of either SA RA (“Son of LIGHT”) or “SAT RA” (“Daughter of LIGHT”).

One of the many names for the Divine in that civilization was “AMEN-RA” which translates as “HIDDEN ETERNAL LIGHT”.

The three periods of a day were: KHEPERA (“Bringer of LIGHT into Being”), RA (“Light” [the Noon hour when the Sun was highest and brightest in the sky]), and ATUM-RA (“Darkness from which comes LIGHT”—sunset).

In Sanskrit, the language of the Vedic land, the title “GURU” translates as “Bringer of LIGHT from darkness”).

Thus, LIGHT has been in ancient times as well as in so-called modern times a “proper noun”, not just a mere “noun”.

Therefore, we must realize that LIGHT is SOURCE, and SOURCE is LIGHT! All of creation has some of “ITS” LIGHT.

As we move into the Mercury Retrograde on Monday (September 27th), and as cosmic forces continue to strongly play their “tunes” throughout the year and into 2022 and beyond, one of the ways in which we can become more anchored to the LIGHT is by asking in our prayers for more sacred knowledge and studying the great teachings of the Avatars, Ascended Masters, Prophets, and Sages who have received revelation from the ALL—the SOURCE LIGHT.

When we continuously acquire knowledge, we literally grow new brain cells, and our pineal gland (the “God Particle”) increases in its ability to be a center of LIGHT and SOUND, of transmission and reception.

Spend quality time during the next weeks of autumn or spring (according to the hemisphere that you reside in) being more diligent in performing the rituals of your path that assist you in understanding your true “being-ness”.

Contemplate how you are actually LIGHT and how you are being regenerated and revitalized and prepared to be “PURE LIGHT”.

It is indeed possible. It is occurring.