And They’re Off! - Cleansing And Upgrading Of Creation 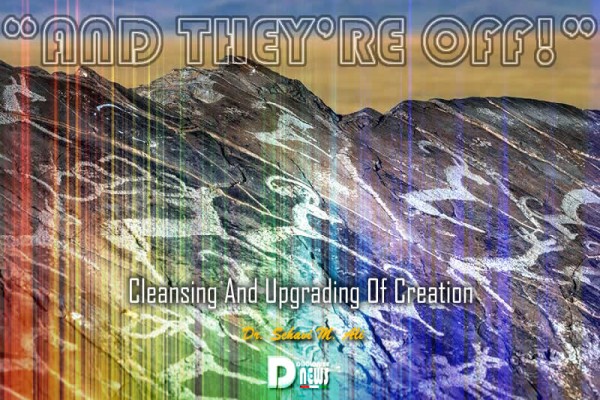 And They’re Off!” – Cleansing And Upgrading Of Creation – By Dr. Schavi M. Ali

The phrase “And they’re off!” is used when horses surge from their gates in races—it may be the “Kentucky Derby”, the “Preakness”, or the “Belmont Stakes”.

In like manner, cosmic energetics “race” to the planet—not in a competition— but in a cooperative bringing of LIGHT for cleansing and upgrading of creation.

The current “race” of energies is that solar flares of medium-strength (“C-Class”), coronal mass ejections (CMEs), and solar winds have occurred during the New Moon energies of September 2021 which have brought plasma particles into Earth/Gaia’s magnetosphere causing an activation of “Her” inner and outer fields.

The magnetosphere can be considered like the planet’s auric fields—a protective surrounding force that can be penetrated by cosmic rays from both inside and outside of our galaxy.

On a chart, when the magnetosphere is powerfully filled with plasma, it appears with a red hue pulsating and pummeling around and into the planet.

The “KP Index” (administrated by the observatory in Oulu, Finland) which registers the activations (some would use the term “disturbances”) to the planetary fields is rated as “unsettled”.

Spiritually this is actually Earth/Gaia receiving “information” via LIGHT and SOUND transmission and reception. Scientifically speaking, the “KP Index” on any given day is rated as being either “quiet”, “unsettled”, “storm”, or “severe”.

When the aforementioned conditions are extant, there are usually strong thunder and lightening storms, tornadoes, earthquakes, and floods around the world. There has been, in fact, a 7.0 quake in Mexico on September 7th and several storms and tornadoes in the USA and in other nations which have resulted in power outages in the past several hours.

Chakras in both the planet and in human physical vessels are being worked upon, and people are reporting increased pain levels in muscles and joints, scratchy throats, headaches, heart palpitations, and fatigue as well as other “symptoms”.

The average consciousness will, of course, say that since seasons are changing, colds and flu are happening. Such persons do not realize the “meta” (“beyond”) “physical” (“material”) indications of a transformational process of the carbon system to a crystallized or spiritually awakened system which requires a total “overhaul” of human parameters of experience which may seem to appear as “illness” in the lower streams of consciousness.

They do not understand that this process has been occurring for thousands of human years, and mankind has labeled the cleansings of cellular records and clearing of DNA with certain names which then allow for the development of medications to handle or remove the so-called “problem”.

Thus, people have willingly medicated themselves into actually having a low immune system and an inability of higher thought processes.

As is constantly discussed (especially for those who are new to this type of knowledge), the cleansing and clearing process of the creations of SOURCE is not without uncomfortable physical, mental, and emotional symptoms which many refer to as “Ascension Symptoms”, and to which I have introduced the term “Light Activation Symptoms” (abbreviated “LAS”).

An analogy is to think of a building (it may be a home or an office building) which has been unoccupied for many years with no upkeep being done until new owners occupy the space.

That building will become dusty, dirty, paint-chipped, and moldy. It will need to be either torn down, repaired and redecorated, or a new building constructed in its place.

This is exactly what is happening in creation. Particular beliefs are being “torn down”; cells and DNA are being “repaired”; and new levels of individual and collective consciousness are being “constructed”.

The “hammering” and “nailing” of the LIGHT can be challenging to the nerves of the human physical “building”. Another metaphor that is often used is “birth”—“labor” is not fun—it “hurts”—but the end result is a beautiful baby.

Therefore, think of creation as being “re-constructed” within the sacred womb of SOURCE, and we are being prepared for “re-birth” as higher-minded, crystallized formations of SOURCE LIGHT.

If we really believe that we are “OF GOD”, then it must be realized that the nonsense, chaos, confusion, oppression of people, suppression of vital information, etc. is not in alignment with the INFINITE PERFECT PRESENCE—the GREATER SPIRIT (LIFE FORCE) of our individual “life forces”.

Many people are asking again about “Kali Yuga”—the “Age of Chaos”.

There have been many of these throughout the space/time continuum.

This is a time line when there is a complete breakdown of civilization and all of the horrors that are involved such as environmental toxicity, wars, famine, disease, group prejudices, economic problems, religious indoctrination, political intrigue, riots, crime, quakes, volcanic eruptions, floods, and more disharmonies—all disruptions to the “Divine Symphony”. All Yugas” (Ages”) last for thousands of human years.

The “Kali Yuga” currently being experienced on this planet began in approximately 4300 B.C.E. (“Before the Common Era”) when the massive continent of “Alkebu-lan” was invaded and lands were burned, temples dedicated to SOURCE as the DIVIINE MOTHER were destroyed, books of knowledge were burned, and people who refused to go along with the incoming doctrines were annihilated. In 3228 B.C.E., the Avatar Sri Bhagavan Krishna took physical birth and gave humanity Divine Principles.

Thus, he arrived and left within this current “Kali Yuga” which is still raging.

It will not end until enough of humanity has elevated to a higher spiritual frequency.

During any “Kali Yuga”, only 1/4 of all human beings are elevated or even trying to make the attempt.

We must travel through the other “Yugas” whereby 1/2 awaken, then 3/4 awaken.

As of this “Now”, we are in the “Age of Aquarius”, which as I have previously discussed, is not the “New Golden Age”.

It is a time period when lots of opportunities are provided for humanity to obtain higher knowledge and learn to use it wisely.

Some refer to it as a “recess” period from the most devastating turmoil of “Kali Yuga” because increasing numbers of mankind begin to level-up.

This “recess” began on December 21st of the year 2020 when the planets Jupiter and Saturn aligned in Aquarius in the Tropical Zodiac and Capricorn in the Sidereal Zodiac.

However, even the “recess” period has much “debris” that must be cleared away.

SOURCE knows when all “Yugas” begin and end. Human beings do not. Remember this verse from one of the world’s scriptures: “No one knows the day or the hour”.

Think of this metaphor: A soon-to-be-mother does not know the exact day or moment when her labor will begin. The Obstetrician can give her an approximative date of the birth of her baby. However, the mother can glean an idea of when her labor will begin in the final weeks of her pregnancy because she knows the physical signs, and she has also developed a strong intuition.

The signs are occurring which indicate eventual “re-birth”. We are definitely in “labor”.

The signs of “Kali Yuga”, however, are still extant as well.

Mankind has been given much free will.

It can be employed wisely for blessings or unwisely for consequences.

The truth is that once our SOULS are “fertilized’ by SOURCE, we have the power to “gestate” ourselves via our escalation in consciousness and to be “born” with the LIGHT frequencies acting as the “forceps” which help us.

So, as for the question: “When will the New Golden Age arrive?” here is the answer: “When would you like it to arrive?”

We are given the decision to harmonize with SOURCE or not.

Some will be “born” into the “Gold” before others.

They are more already “developed” in the “birth canal” and have turned toward the LIGHT.

They will reach back and assist their brothers and sisters as they head, perhaps slowly, towards “re-birth”.

The “cosmic messengers” (flares, winds, CMES, etc.) are the “Professors” distributing our “pens and paper”, giving the exam, and soon, they will say “Begin”.

The Great Central Sun and the Photon Belt will say of us as they send power to the Sun of our galaxy: “And they’re off!”

Hilarion: Meditation and Journey of Forgiveness - Seventh Round

A Sharing About Prejudice

Harmonizing with the Heavens

Teachings of the Masters: Change