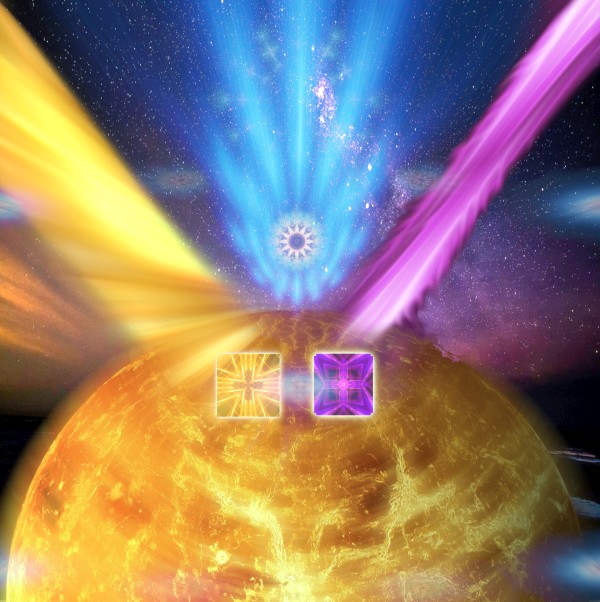 The Solar Rishi and Solar Dragon Kings are braiding themselves throughout the crystalline grids which hold the holographic celestial map of many Sun-Stars and constellations that are transmitting organic liquid plasma consciousness technology that catalyzes Solar Synthesis. This is a solar symbiosis process which blends physical matter with solar fire plasma codes throughout the Planetary Grid Network, which further energizes the Sophianic plasma shields and Solar Rainbow Dragon elemental shields which are animating crystal vapors into the fluids and waters in creation. These liquid plasma shields are designed to further re-encrypt elementals and purify the corrupted astral waters, fluids and vapors that are within the planetary crystalline matrix and the human body’s water management system. This is re-organizing the fascia crystalline matrix whereby solar codes are igniting plasma crystals in the extensive webbing of our neurological matrix, upgrading the cellular matrix in our bone, blood, skin and tissues to receive liquid plasma codes.

The increased solarization of the planetary grid network is occurring rapidly in the stellar grid areas where the Sun-Stars are being reconnected into multiple layers of crystalline grids and diamond diagonal grid networks that power up the master controller grids in the Albion. As there is a reconnection of the Sun-Star Stellar maps into sections of the crystalline grids on the Earth, this is beginning to build higher liquid plasmic ray frequencies to the level that the planetary magnetic field is exponentially weakening. The magnetic field is shifting to the extent that the gravitational pull is lessening which causes the collapse of alien frequency fences and assorted controller machinery, which begins the transfiguration of the raw substances in physical matter and mental body matrices. As changes in the magnetic field occur, this can impact the electromagnetic balance between the left hand and right hand positioning in the body. The lightbody adjusts itself to the organic alignment of correct left and right positioning towards the true north star leading into the future timeline.

The transfiguration of physical matter during phases of Solar Synthesis means activations that are inspiriting the angelic human body and building the lightbody forms to receive Plasma Codes, which build into a Plasma Luminary Body which is positioned in now eternal time. To embody the liquid plasma light, we each must remove the false, artificial and obsolete while strengthening and merging the inner dwelling with our authentic monadic identity, which in its final stages births the Inner Christos from liquid plasma. The authentic spiritual self is the monadic identity which seats itself in the core or midsection of the physical body, and the core spiritual self is the center anchor of the plasma luminary body which exists in now eternal time.

The Crystal Core activation and solar body changes are generating massive plasmic energy bodies that are being directed through stages of Ionization that are happening deep underground and on the earth surface. Plasma is a very hot gas in which the electrons have been stripped from atoms. For plasma to exist, Ionization is necessary. Ionization is the process by which an atom or a molecule acquires a negative or positive charge by gaining or losing electrons.

Plasma does not have a definite shape or a definite volume unless enclosed in a container and this is why the Krystic architecture must be built for the Cosmic Christos hydroplasmic light to dwell within. This also helps to explain how our physical being is undergoing a process of less densification in matter in order to shift into another state that is more fluid. As we change the electron count through the process of ionization, by adding protons from the solar activity and plasmic light from crystal core ionization, the basic compounds of our elemental body are becoming less dense. As we are gradually able to conduct liquid plasma light, we are able to change the atomic structure of our body from carbon based to the less dense compound of silicate. This is a stage of activating the silicate matrix within the biological-spiritual template. This occurs through the changing of the number of electrons that are bonded to our atomic and subatomic structure. This same process is adding new elements into the matter realm that were previously missing, through which new elementals are being formed.

Plasma when exposed to magnetic fields, form filament structures that form bonds that interconnect with all other states of matter. So as an ascending human develops the ability to embody hydroplasmic light, these filaments are directly experienced as interconnected lines of crystalline light that connect to everything and everyone in the crystalline network.

The Guardians have mentioned that the massive amounts of energy being produced from ionization and the reaction in which this energy is being absorbed in the form of thermal heat and atmospheric pressure changes, has moved tectonic plates. The planet is being buffered and supported to neutralize and reduce the effective nuclear charge this ionization potential can generate, and so they offer a gentle reminder that we will not suffer cataclysmic pole shift on the earth surface. What is happening to the planet is not random and we do not have to be at the mercy of unruly Alien Gods wreaking havoc through Armageddon prophecy. We are on a planet undergoing the pinnacle of the ascension process, during great birthing pangs in the Bifurcation stages. The highest priority is to cultivate and connect a direct relationship with our inner spirit and consciously participate with the Ascension process in the best way that we can. There is nothing to fear when we are focused upon our spiritual connection, but we need to stay alert and develop awareness of our shifting and changing environments so that we can take good care of ourselves.

The recent transmissions were a momentous event that has stabilized a different ratio of particle charge to the magnetic field layer, within our planetary ionosphere. The Ionosphere is the uppermost part of the planet’s atmosphere, distinguished because it is ionized by solar radiation. The Ionization levels depend primarily on the Sun and its activity. The amount of ionization in the ionosphere varies greatly with the amount of radiation received from the sun. We have recently had unprecedented massive solar flare activity and this is the associated release of charged particles into the solar wind, which reaches the Earth and interacts with its geomagnetic field. Ionization is the physical process of converting an atom or molecule into an ion, by adding or removing charged particles such as electrons or other ions.

Ions can be created by either chemical or physical means through the process of ionization. The human body when subjected to strong electromagnetic signals, or activated Kundalini, is capable of biological ionization that can generate Plasma. In the ascending human body, ionization produces higher frequency Plasma light for continuing to build our liquid plasma spiritual body.

Thus, our cells are similar to miniature batteries and electrical generators. They conduct electricity, create Electromagnetic Signals, and are powered by a low level of electrical voltage. The nervous system uses electrical energy, termed nerve impulses, to transmit messages from one cell in the body to another cell in the body. Imbalances of any of these Ions, or inhibition of ion transport across the cell membranes, can lead to dysfunction in the conduction of electrical messages. This dysfunction quickly leads to a general body disturbance and loss of energetic stability in the bio-spiritual field. Additionally, this dysfunction skews internal messaging between the cells, blocks conduction of electrical messages in the nervous system and can alter or change Electromagnetic Signals in the body.

We have 1485 guests and no members online