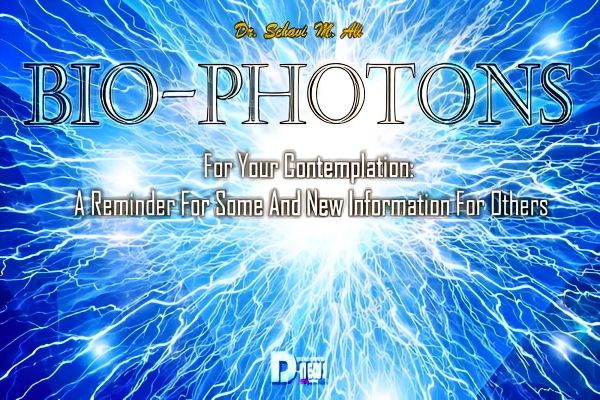 For Your Contemplation: A Reminder for Some and New Information for Others.

We are receiving massive doses of Biophotons daily as Earth/Gaia and our entire solar system moves steadily through the first vortice of the “Photon Belt” whose entire vortex is comprised of twelve vortices.

This total journey has occurred for our solar system over and over again for many eons.

When the first vortice is entered, there is lots of turbulence as the old disharmonious programming of many thousands of years falls away and as new information comes to us.

The term BIO is defined as LIFE, and PHOTON refers to LIGHT. Thus, the word Biophoton is LIFE LIGHT.

Biophotons carry information from cell to cell, a process which is responsible for our becoming multi-dimensional as the LIGHT that is already within us is more concentrated and has a higher rate of “spin.”

Therefore, an inter-cellular network is occurring.

As the process of regeneration (re-birth) to higher states of being occurs, individual as well as collective consciousness changes; emotions shift; and finally, the physical vessel transforms to align with the tremendous BiophotonIC network that has happened and that continues to occur.

Many researchers refer to this as the “Light Body.”

Our thoughts that are comprised of electrical frequencies produce emotional magnetic frequencies, and our experiences manifest accordingly.

In other words, we can think in a particular way about someone or some situation, and our emotions become aligned with that thought.

Then our behavior becomes the combination of the thought and the emotions involved.

This is why it is vital to learn about what is actually transpiring in the cosmos and how its energetics are affecting creation—especially on the planet we inhabit—Earth/Gaia—which has had and still does have many other names predicated upon the numerous languages spoken and written around the world.

When we realize that we are involved in a regenerative process orchestrated by SOURCE, the physiological, mental, and emotional perceived “challenges” are easier to handle.

Besides the prayers and other rituals of our particular paths, we should daily recite a “present time” affirmation such as: “I AM EASILY MOVING THROUGH THE Biophotons OF REGENERATION”.

We can also say: “I AM BLESSED BY SOURCE LIGHT”.

A very powerful affirmation is to combine the two affirmations so that we are saying: “I AM BLESSED BY SOURCE LIGHT, AND I EASILY MOVE THROUGH THE Biophotons OF REGENERATION”.

As we receive more and more Biophotons, our ability to manifest our needs and desires extraordinarily increases, and our auric fields are stronger and protected from disharmony due to the thoughts, words, feelings, and actions of others who have a low vibrational frequency because of their continual focus on what is occurring in the “3d” realm relative to political chaos and all of the erraticism and evil that it brings as people campaign for prestige, control, and monetary power.

Politics is unfortunately a game, and most of the world’s citizens are pawns in the game.

All of this is being revealed as SOURCE LIGHT bathes this realm.

However, free will is much discussed because we are still allowed to have it. If people choose to vibrate at a lower frequency, they will attract the muck and mire of that vibration.

On the other hand, if they choose to vibrate at a higher rate, they will acquire a greater propensity to receive more of the Biophotons that can orchestrate the “Shift of the Ages”—individually and collectively.

Although we regularly discuss solar flares, coronal mass ejections, solar winds, and more cosmic events that are affecting our planet’s magnetosphere (protective magnetic field) and causing pulsating proton and electron plasma particles to press into the inner and outer fields of Earth/Gaia, and although added to such discussions are how our planet’s specific vibrational frequency and amplitude (“Schumann Resonance”) is elevated as tectonic plates shift and as the planetary axis turn is faster and also wobbles—these events are only what mankind’s technological instrumentation attempts to record.

In actuality, cosmic happenings are far more intense than machines can register.

The great intensity that cannot be completely technologically registered is what is arriving from SOURCE LIGHT that is “”beyond the beyond” and which is giving us the Biophotons of our regeneration.

The solar flares, coronal mass ejections, etc. certainly affect us with what is being termed “Ascension Symptoms” and what I have chosen to name “LIGHT Activation Experiences,” and they occur as the “Shift of the Ages” is happening which, as is constantly discussed, is created by SOURCE.

Mankind’s experimentations with Nature such as pouring down toxic chemtrails into the atmosphere and engineering food and endeavoring to control weather patterns, etc., will soon not be allowed to be successful as the Biophotons increase in our planetary realm and within us.

Tampering with cosmic forces will be met with karmic consequences for those who continue to do so.

Those who diligently try to stay anchored to SOURCE FREQUENCY will be aided.

The “New Earth” is not a place. It is a frequency.

The frequency is a type of veil, and the veil is becoming thinner.

The word “frequency” indicates the rate of a certain phenomenon at various intervals of occurrence.

The phenomenon of receiving enormous amounts of Biophotons is happening faster as all planets in our solar system increase in SOURCE LIGHT as the “Photon Belt” is engaged as well as the soaring towards “The Great Attractor” is intensified.

To reiterate information on this which has been detailed in a previous article, “The Great Attractor” is a section in the cosmos that is larger than our galaxy— “The Milky Way.”

It holds a mass of 1,000 trillion Suns, and our solar system is zooming towards it at 2.2 million kilometers per hour.

It is a massive electromagnetic field of radiation that bends gravity. It is devouring neighboring galaxies, but it is also sending out profoundly enormous amounts of LIGHT into the consciousness of all beings—including those of our planet.

It is a powerful phenomenon of LIGHT AND SOUND TRANSMISSION AND RECEPTION.

We are experiencing an era that has been hundreds of thousands of years in the making.

We are about to spiral up to “Dwarpa Yuga” as described in the ancient Vedic scriptures that are the oldest thus far discovered by humanity.

This will be a time frame when one-half (1/2) of all people on our planet will be highly elevated in consciousness from the only one-fourth that are currently so elevated in what is called “Kali Yuga”.

Supposedly, “Dwarpa Yuga” will earnestly commence in the year “2025” although its “birth” is on the way down the “birth canal”.

One year earlier—“2024”—Pluto, the planet of major transformation, will have moved from its current placement in the constellation of Capricorn in the Tropical/Western Zodiac to Aquarius and from Sagittarius in the Sidereal/Vedic Zodiac to Capricorn.

Both systems are viable.

In brief, our planet will likely be unrecognizable in many ways—both geographically as well as in human experiences and capabilities. “Yugas” (“ages”) last for hundreds of thousands of years.

However, with the Biophotons that are speeding to us, the ages can be quickened in their arrivals. After “Dwarpa” comes “Treta” when three-fourths (3/4) of humanity is elevated, and arrives the splendid “New Golden Age” called “Sattva Yuga” when the entire planet knows only peace, perfect health, abundance, tropical weather, and more blessings.

Some people are saying that we are in the “New Golden Age” now.

I disagree because we have yet to have enough of humanity to elevate to HIGHER KNOWLEDGE so that the “3d” horrendous occurrences still happening are dissolved that cannot be denied such as hatreds, wars, disease, famine, economic downturns, political chaos, sociological upheaval, mass shootings, earthquakes, volcanic eruptions, hurricanes, etc.

As has been mentioned before, we cannot simply tiptoe through the tulips and pretend that these things are not happening. We, can, however, work towards their end by the way in which we choose to engage SOURCE LIGHT.

It is certain that Biophotons are assisting us in making righteous choices, and they are coming from “beyond the beyond” as stated earlier, and they are the ethereal energetics of the INFINITE PRESENCE who has been given many names but who is beyond all of the names—SOURCE—the sacred root of all existence.

Note: My thanks to the research of Pam Gregory and Dr. Carl Calleman for some of the information on Biophotons.

We have 1108 guests and no members online