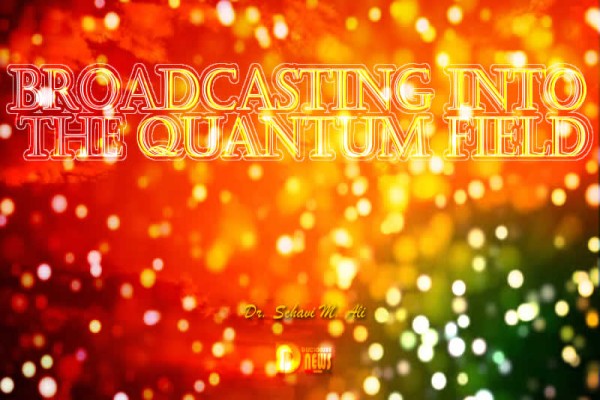 We are all familiar with radio frequencies.

When we turn on a radio, in order to reach a desired station, we turn or push knobs or buttons until we reach the desired program.

While searching for the desired station, we hear various dissonant sounds from other stations until the station we want comes in clearly.

Sometimes a radio device may be set for a specific station, and it comes on automatically when the radio is flipped on.

When the program begins, this is known as a “broadcast”—vibrations sent forth—the station is sending out information to us.

It may be a musical program, a news program, or a talk show with interviews of certain people on particular topics.

Televisions are also broadcasting devices, but we can see images on the screen of the people involved in the program, and usually, a television can be instantaneously flipped on to the desired network or we flip through various networks with a remote control device until we reach a program we want to watch.

In like manner, we too “broadcast” from the “network” of our thoughts, emotions, words, and actions.

We send frequencies into a quantum field of energy (life force), and experiences or “programs” are the result.

The word “quantum” is defined as the smallest unit of a physical quantity that can exist independently.

In terms of a spiritual discussion, however, we are dealing with electrical mindsets and magnetic emotional responses which result in words and actions accordingly which can result in further types of electromagnetic energies that manifest as experiences—good or bad.

A “spiritual quantum field” is the ethereal substance—“supernal broadcasting substance”—that cannot be seen but which can be connected to for various purposes.

For almost over two years, many “programs” of fear have been broadcast into the human collective “receiving stations” dealing with viral pandemics, toxic inoculations, countries threatening to invade other countries, dangerous “5G”rollouts, sexual trafficking, terrorism based upon cultural practices which have been made into religion, the problems of a depleted planetary ozone layer, and much, much more.

A very large percentage of humanity is depressed and anxious, and of course, laboratories which manufacture chemical drugs are using this to push their dangerous compounds—furthering the “broadcast” of fear and panic, especially when commercials admit to the horrible side effects of the drugs, but then, a gentle voice urges the listener or viewer to talk with his or her doctor about the drug because it may be needed, regardless of the side effects.

(It is not that the laboratory cares about humanity’s welfare. They are trying to avoid law suits in case something dire occurs with the drug. Their safety valve is that they told you the side effects in the first place)!

Fear and anxiety are becoming the “norm” due to the examples just given above, and this is unacceptable to those who are truly connected to SOURCE FREQUENCY—the CREATOR of the “Ultimate Field of Quantum Energy”.

This is where timelines and dimensions come into discussion.

They are levels of consciousness—not specific places.

For a simple example, suppose rain is pouring down in a certain place.

Let us say that a person in a house says: “Oh, no! This is going to be a miserable day with all of this cloudiness and rain!”

Another person, however, perhaps living next door, says: “Wonderful! This rain will feed the trees, flowers, and other plants with needed sustenance so that they can thrive.”

Yet, they each have a differing “consciousness” regarding the rain.

They are actually experiencing differing timelines or dimensions.

The person who does not like the rain will attract to himself or herself reasons throughout the day to feel depressed, frustrated, and perhaps even angry.

The other person will attract peaceful experiences.

They are both “broadcasting” into a quantum field with their free will.

People who are sincerely seeking elevation to higher states of consciousness will certainly witness disharmonious situations, but they do not have to become intrinsically involved in them.

Like Yeshua Ha Messiah taught: “Be in the world, but not of it!”

He also said: “Shake the dust off your feet and let your peace return to you!” (HOLY BIBLE).

Sri Bhagavan Krishna taught: “The person who has happiness within, who has contentment within, whose LIGHT is within, attains eternal freedom in DIVINE CONSCIOUSNESS.” (BHAGAVAD GITA).

Tehuti taught: “Good is voluntary or of its own accord because of free will.” (EMERALD TABLET).

From these teachings (and certainly other spiritual paths have holy texts which deliver similar teachings), we can discern that we receive “broadcasts” daily, and we send out “broadcasts”.

As ancient texts inform us, we are in an era of “Kali Yuga” (“Age of Choas”) when civilization is comprised of only one -fourth (1/4) of a humanity that is making an effort to elevate.

Yet, the hope is that we will soon witness an era called “Dwarpa Yuga” when at least one-half (1/2) of humanity are elevated.

The important aspect to ask is: What “channel” are we “broadcasting” from and into—SOURCE FREQUENCY or THE CHAOS CHANNEL?

Each human being is a “broadcasting station”, and his and her “network” is their own “quantum field” of energy—life force that is either of a low level or a HIGH LEVEL.

Give a smile and a peaceful greeting to everyone you encounter.

At the end of the day, think about your experiences.

Did you have an unexpected blessing come to you?

Did you simply have a relaxing peaceful day without any disruption from a stress-out or trauma-filled person or group?

Either way, your nervous system was able to maintain balance.

When the nervous system is pure, BEING reflects more, and the MIND is more powerful.” Let us carefully consider what we are “broadcasting” daily and which “networks” we are receiving from as well.

Be wary of people who continually “broadcast” from a lower “frequency”.

Do not allow their dissonance to impede your progress of expansion into and connection with the “SLN”—SOURCE LIGHT NETWORK.

We have 790 guests and no members online