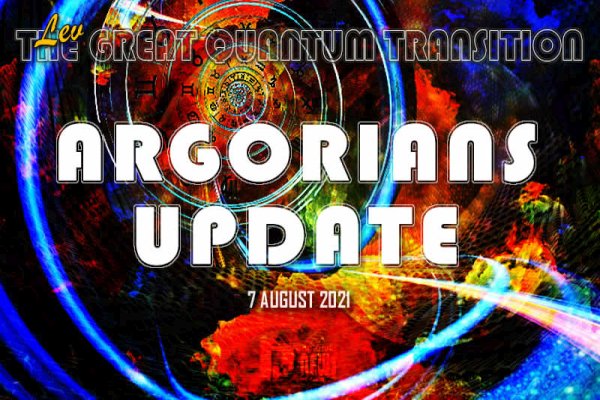 According to a report on August 7, 2021, at 3:10 pm CET from the commander of the Argorians’ Squadron, which is moving Earth into a new 5D vibrational orbit, they have entered a new power field.

It is located on the next (fifth) cascade inside the space filter through which the planet is transported.

This field triggers an aligning stabilizing impact on the work of the Earth’s and the intracellular cores of the human body. This is how they adapt to the 5D.

External space surrounding the planetary system has a structure of the 4-dimensional and 6-dimensional quantum levels. Accordingly, the Earth and human civilization go through an active transformation of all quantum systems (fractals).

This transformation is strongly felt both by the planet itself and by human bodies.

All interplanetary processes (spheroids, plasmoids, tectonic and thermal) are under transformation.

Changing the magnetic fields allows us to reconfigure not only the physical but also the psychological mood of the planet and the people living in it.

According to their plans and programs, Co-Creators constantly monitor and adjust all the processes that took place.

Earth is now going on a cascade ascent (ascension) through the levels of the quantum state. It clears the planet of low-frequency vibrations and tunes it to higher ultrasonic tones.

This causes aches to Earth and in everybody as a signal of changes.

Low-frequency systems degrade. They lose orientation in all current processes. The psyche jumps, aggression appears, and the body suffers.

The process goes as far as removing everything from the planet that has to do with the third dimension.

In the Greater Cosmos, the Time is absent, but it is present in every cosmic fractal (constellation, star, planet, body, and cell).

On Earth, Time is currently divided into 16 flows (lines). It becomes very noticeable at the level of society – States, organizations, groups, families.

Some stay in the past, some live in the present, and even in the future. That is why it is so difficult to correct events timely.

The scientific world of the planet is at a standstill and perplexed. Fundamental knowledge is disappearing. Technology is becoming a thing of the past and there is a resistance to the new, to the future.

Passage of the cascading quantum steps changes the entire state of the Earth. The Squadron and the Galactic Committee observers try to guide the planet and civilization as gently as possible into a new vibrational orbit.

They are doing all they can to preserve the planet and as many Souls as possible, ready for the Creator’s new programs.

The harvest is already underway. Technical and planetary changes will be amplified and altered by ultrasonic and ultraviolet pulses.

The people of Earth must change their attitude toward the planet and each other.

The dark Forces power ring has already been burned by high-frequency vibrations. A time of global change is coming. Get ready for them.