Chiron And The Current Message 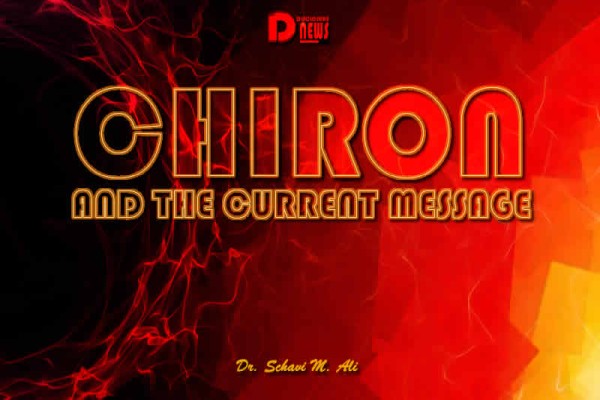 Chiron, the planet of healing (It is officially known in Astrology as the “Wounded Healer”), is in Tropical Aries which sextiles Tropical Aquarius—the sign in which the New Moon of February has arrived.

A sextile is considered as being a harmonious aspect in which there is an easier flow of life experiences rather than the usually challenging aspects of squares, the sometimes-disturbing aspects of conjunctions, and the cautionary aspects of oppositions (although with oppositions, each has something that the other actually needs).

As a planetary vibration, Chiron does not just carry energy for healing of the human physical vessel.

Its symbolism is also for healing and manifestation of financial concerns, new dwellings, relationship issues, and spiritual development.

Of course, it is also wise to consider where Chiron is transiting relative to a person’s (or a business or an organizations or a nation’s) natal chart because this is where the greatest focus will be placed.

For example, if Chiron is transiting the fourth natal house which governs the domestic sphere, then that is where some sort of healing must be done—perhaps a move to a new environment or re-decorating the current one.

In the natal chart of the USA, Chiron is transiting its fifth house of social situations, children, and creative enterprises.

Thus, something must change in terms of its social structure (rules, laws, regulations, etc.), its laws that protect children from harm, and its manner in which government and citizens work for a better and safer nation.

Of course, these things should always be focused upon; however, with Chiron as a message giver, such conditions will be of major importance until it moves on into Tropical Taurus in 2027.

Hopefully, it will not take this long for national conditions to become good.

Planetary alignments are messages given via their vibratory frequencies as they “communicate” with each other via their conjunctions, sextiles, squares, quincunxes, oppositions, etc.

The longer it takes for messages to be received and “translated” into actual change, the denser situations become until change is forced upon a person, a business, an organization, or a nation in dramatic ways.

Chiron comes to heal what has already been “wounded” in some manner over a long period of time.

Healing is often related to past lives.

Those who believe in reincarnation discuss how the Chiron placement in a chart relates to a past life occurrence.

However, there are those who, although they certainly believe in reincarnation, do not believe that constant returns to Earth/Gaia happen.

There are billions of universes.

Our planet is just one beautiful small orb in a vast cosmos of galaxies and universes.

Therefore, particular past experiences do not necessarily always relate to this specific planet known as Earth/Gaia.

There is yet another theory advanced by Dr. Carl Jung.

He taught that it is cellular memory that we are experiencing, not reincarnation.

In other words, we are sensing via our cellular records the experiences of our ancestors.

Therefore, healing of the ancestral line is very important.

Some ancient cultures taught about a transmigration of the Soul.

In other words, a person could return to earthly life as an insect or an animal or a plant, etc.

This, however, was taught to frighten people into behaving righteously.

It is not, for instance, in the Vedic scriptures which are voluminous with Divine principles from which later holy texts have derived much of their information (in addition, of course, to the added cultural frameworks of certain civilizations over many eons of time).

Some people do not believe in any aspect of reincarnation.

They do believe, however, that according to how a person lives his or her life, they are either rewarded or punished in some manner in some place for eternity.

In fact, for example, Muslims do not believe in reincarnation unless they have strayed from the teachings of the HOLY QU’RAN.

They believe in Paradise or Hell.

Some of the Christian sects believe the same thing.

Yet, there are those who subscribe to the belief that whatever you believe is what you get because free will is of this life and the next.

The “multi-dimensionality” that we are all moving into in this “Now” as a “New Golden Age” is upon us—the “Sattva Yuga” of the Vedic scriptures—which beforehand will come “Dwarpa Yuga”— is a time of consideration that we have a gene for immortality within us— not just immortality of the Spirit and Soul—for most spiritual paths and religions teach this—but immortality of the physical vessel itself which via a process of molecular transformation in one place and “re-molecular construction” in another, we travel throughout the cosmos.

This is not just conjecture of spiritually oriented people.

As long as the physical vessel is properly respected and nurtured, this is a possibility.

This is supposedly already the case on other planets.

With the sign of Aquarius being governed by the revolutionary and sudden realization-giving planet Uranus, and with the New Moon having arrived in this sign being in harmonious sextile to Chiron in Aries, “aha” moments are possibilities as well as it being a portal for the manifestation of goals and desires in our daily planetary lives of personal ventures, career, family, finances, etc.

Also, sitting in prayer to SOURCE and then visualizing your needs and desires works wonderfully well.

It can also be a very stubborn and very opinionated sign–refusing to consider alternatives in certain situations.

Uranus will move into Gemini in 2025.

While in Taurus, there will be global economic change on a wide scale—a complete transformation on how goods and services are acquired.

This is already in its early phases.

As we release the Mercury Retrograde on February 4th, and as we are within the New Moon phase, and as our planet continues to experience solar energetics bringing geomagnetic activations, we should be diligent with our daily communications with SOURCE so that we can be capable of using our free will correctly in tune with SOURCE FREQUENCY.