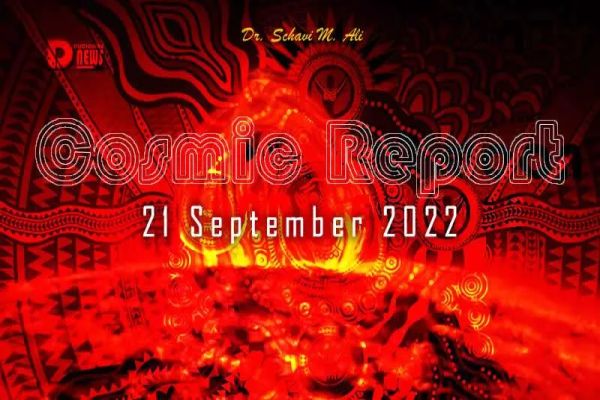 Heading into tomorrow’s Northern and Southern “Equinox” of the hemispheres, solar winds are traveling at 481.7 kilometers per second, and there has been an “M.1-Class” solar flare at 1122 Universal Time (UT) or 6:22 AM Eastern Daylight Time (EDT).

Bright auroras have been visible around the world, and one very huge greenish purple one was so awesome in Troms, Norway that as people viewed it, they screamed in awe, according to tour guide Markus Varik.

He described the auroras this way: “There were swirls, spikes, curtains, draperies, you name it. We must be getting close to the equinox.”

Cracks forming in Earth/Gaia’s magnetosphere allow electromagnetic particles from our Sun to surge into “Her”.

Auroras are formed when strong solar winds send out solar electrically- charged particles (coronal mass ejections) into our planet’s magnetosphere which is already filled with electromagnetism.

In modern times, Danish scientist, Dr. Hans Oersted, is said to have discovered electromagnetism in 1819.

However, thousands of years earlier, the sacred text RIG VEDA discusses electromagnetics when it says: “Prevailng over everything, plasma clouds are…forms created in the heliosphere and beyond” (translated from Sanskrit into English).

This book goes on to discuss the phenomenon of “Savita” which are the continual expansions of cosmic rays at the center of every galaxy which are taught to carry “Divine Consciousness” and are encoded with cosmic laws that heal humanity and plant life and also expand human spiritual knowledge.

The RIG VEDA is the oldest of the four main Vedas. The others are the SAMA VEDA, the YAJUR VEDA, and the ATHARVA VEDA.

There are many Sanskrit scriptures of “Sanatana Dharma” (translated as “Eternal Path” that is mistakenly referred to as “Hinduism”—a term originally derived from the Greek language), and a few other holy texts are: the MAHABHARATA, the BHAGAVADGITA, the PURANAS, and the UPANISHADS.

Looking back often helps us in moving forward.

Modern mankind is standing on the shoulders of ancient Divinely revealed wisdom.

We have 901 guests and no members online