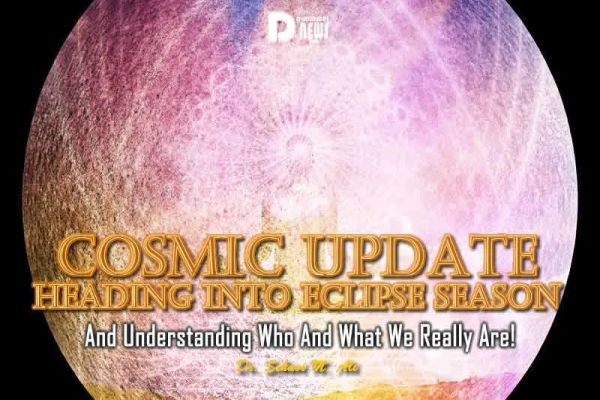 At 7:20 AM (Eastern Daylight Time) a far side “Coronal Mass Ejection” (CME) exploded from the Sun setting off a planetary “Kp Index” at “Storm” level.

It was created by the Physicist Dr. Julius Bartels in 1938 to illustrate activations which occur to our planet’s inner core and outer field when powerful solar events occur.

The “KP Index” is rated at being either “quiet”, “unsettled”, storm”, or “severe” according to the varying strengths of cosmic events.

Solar winds are currently as of 11:29 AM (Eastern Daylight Time) traveling at 532.1 km/s (kilometers per second) which is many millions of miles per hour and are expected to rise higher.

There has been a medium-strength “C-1” solar flare.

More potent flares are in the M-Class” range, and the most powerful solar flare is “X-Class” which occurred a few weeks ago.

Lower-level flares are “A-Class” and “B-Class”.

The stronger the flares, the more activations occur to our planet and to creation upon “Her”, and consequently, physical, emotional, and mental symptoms can be intense.

Eclipse season has arrived because portals for exclipses tend to open a month prior.

A “Solar Eclipse” will occur on April 30th at the second New Moon of the month in Tropical Taurus and Sidereal Aries.

Solar eclipses tend to offer opportunities according to whatever natal house they visit, whereas, Lunar eclipses heighten emotional responses to various personal and collective world events.

In both cases, however, Solar or Lunar, certain releases are required in order for newness and balance to happen.

Relative to our planet’s magnetosphere, solar wind velocity is a mixture of fast and slow-moving currents which create shock waves (thus the winds coming in at over 500 km/s stated above); plasma particle density is quite profound; and cosmic pressure upon the magnetosphere is extreme.

Strong “M-Class” flares could occur later in the day and over the weekend, and further CMEs could explode. Both the Full Moon Portal (the height of the Full Moon is Saturday, April 16th) and the Solar Eclipse Portal send particular vibrations to our planet’s electromagnetic energy and into all parts of the human vessel.

Thoughts and emotions together create a physical reaction. To reiterate what has been previously discussed in other articles, thoughts have electrical frequencies, and emotions have magnetic frequencies.

Together, they develop into a physical or material response.

With all of the increased LIGHT that has been arriving to our planet, thoughts and emotions which do not serve to elevate consciousness are being cleansed away, and the cleansing manifests physically as certain “Light Activation Symptoms” (LAS) such as headaches, dizziness, sinus and throat congestion, nausea, diarrhea, muscle aches, depression, anxiety, extreme fatigue, lack of sleep, vivid dreams (when sleep does occur), heart palpitations, and more.

These symptoms have been discussed numerous times; however, there are certain cosmic events which can make them more pronounced, and the strong solar flares, solar winds, CMEs, etc. of the Full Moon Portal and the Eclipse Portal are indeed doing just that!

Our planet and galaxy is in a space/time continuum of enormous transformation.

This has been the case for many ages, and the transformational process has been stepped-up in response to the need for planetary uplift to higher vibrational frequencies and greater LIGHT.

The key terms for these intense energies are CLEARING, CLEANSING, RECEPTION OF LIGHT, and ACCLIMATION TO THE LIGHT.

There is nothing “wrong” when symptoms occur (unless a person has been living a life of lower consciousness which involves eating poor quality food [“fast food”], drinking alcohol to excess, smoking, and exhibiting character flaws of hatred of others, foul speech, participating in criminal behavior—and other thoughts, feelings, words, and actions of a low vibrating entity—then an imbalance of the physical vessel can certainly occur due to the cells being tainted and the DNA continuing to take the same forms as they always have rather than being upgraded and multi-stranded).

The DNA is conscious, and thus, so are the cells. They “read” and “hear” thoughts, feelings, words, and actions and behave accordingly.

Those of a HIGHER CONSCIOUSNESS (and those who are sincerely trying to have this) are an intrinsic part of SOURCE SOUND AND LIGHT TRANSMISSION AND RECEPTION.

Exactly what does this entail?

In order to be anchored to SOURCE FREQUENCY, an individual or group must have an understanding of how ancestral as well as more recent historical situations developed, how the disharmonies of such histories can be dissolved, and they must be focused upon achieving collective global elevation and having a relationship with SOURCE (by whatever name is applied to the INFINITE PRESENCE in terms of a person’s path).

All of this involves what has been mentioned before: Study, Prayer, Meditation, Good Deeds. When something is “transmitted”, it is “sent”, and when there is “reception”, something has been “received”.

Therefore, to “transmit” LIGHT involves “sending” high vibrational forces to others, and then the “others” have to be in the mode to “receive” the forces. An example is when in ancient times “Rishis” (“Sages”) had Divine Knowledge “transmitted” to them from SOURCE via the process of “Sruti” which translates from Sanskrit into English as “To Hear”.

The students of the Sages were taught via “Smirti” which translates as “To Receive”.

In other words, the students “received” transmissions (knowledge) from their Teachers (the Sages) who had “heard” Divine Revelation.

It was always the HIGHER SELF—the SOUL—the SOURCE which gave the Divine Revelations.

Today’s true Spiritual Scientists understand this and do not seek to “channel” famous personalities or ETs.

There is no need to do so.

If people will realize that they are a “light” of the LIGHT, then the LIGHT is actually the HIGHER SELF trying to attune human beings to a better awareness of just “who” and “what” they are as the “lights”.

Unfortunately, those of a lower consciousness are allowed to remain in confusion if they choose to do so which results in a low vibrational frequency of intellect which is not conducive to spiritual profundity.

In the ancient language of Kemet (“Medu Neter”— “Sacred Speech”), the word for being “Anointed” or of the LIGHT is “Messu” from which the title “Messiah” is derived.

This title tends most often to be connected to Yeshua Ha Messiah (“Jesus”) who was an Essene Rabbi and a Kabbalist who had traveled to places such as Bharata (India), Kemet (Egypt), Bon (Tibet), and Persia (Iran) at the age of 15 with his uncle, Ben Perachia, studying and being initiated.

Upon his return to Asrae (Israel) at the age of 30, he tried to teach what he had learned but was negated and his knowledge was feared.

As people often say: “and the rest is history”.

In the Medu Neter language, when a person made the pilgrimage to Kemet for study and was tested by the Kheri Hebu and Kheri Hebutu (“High Priests” and “High Priestesses”) over many years, they referred to themselves as “Inok em Messu”— “I am of the Anointed”.

This is almost like when Sri Gautama Buddha thousands of years later said of himself when people asked him who he was: “Aham Butasmi”—“I am awake!”

Yeshua was born in Kemet, and Buddha was born in Bharata–two astounding classical civilizations of humanity who trace their original beginnings to beyond the stars!

Those who are known as “indigenous People” (who many still refer to as “Native Americans”) trace their originality to beyond the stars as well! Interestingly, many of the language glyphs (letters) on the ancient buildings of the “Indigenous People” are the same as the Medu Neter seen within ancient temples and pyramids.

According to the research of historical scholars—only one of whom was Dr. Ivan Ver Sertima—the Kemetu and the Indigenous People have the same lineage.

At the least, they are “cousins” of both the earthly realm and the cosmos!

We can certainly be more respectful now of the biblical verse: “Touch not my anointed and do my Prophets no harm!”

As LIGHT reaches deeply into every atomic particle of our planet and all of creation with the powerful cosmic energetics that are occurring today and throughout this weekend and throughout the remainder of this month of April and whose vibrations will extend for at least the next six months cleansing, clearing, activating, elevating, upgrading, and giving intense LIGHT, reflect upon what you can do to become even more anchored to SOURCE FREQUENCY than you may already be.

The pre-shadow of the next Mercury Retrograde will soon arrive with the actual retrograde being between May 10th to June 3rd.

Each one is filled with treasures that can gift us with GREATER LIFE FORCE, GREATER KNOWLEDGE, and GREATER CAPABILITIES because we will be steadily receiving GREATER SOURCE LIGHT FREQUENCY!