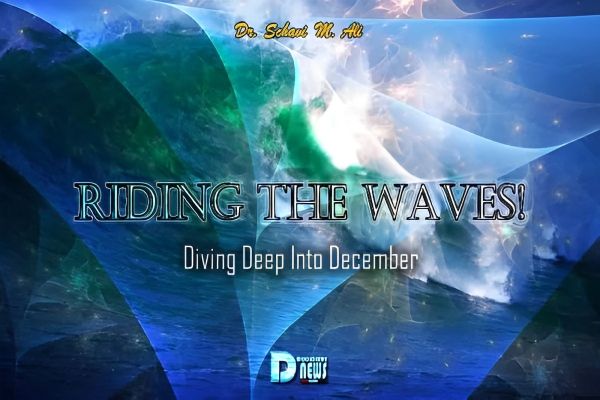 The month of December came in with a bang on Thursday, December 1st, 2022, as an “M.1-Class” solar flare and a coronal mass ejection (CME) blasted off from our Sun at 7:21 Universal Time (UT) which was 3:21 AM Eastern Standard Time (EST) with high solar winds pushing them off traveling at “537.9” km/s.

Neutron counts are still in the “Elevated” status, and the “KP Index” is being rated “Unsettled” with an expectancy that it will be at “Storm” rating by tomorrow if not earlier.

The magnetosphere is yet again being swamped with dense plasma particles on all sides.

There have been 130 earthquakes in the past 24 hours in the upper “4.0” magnitudes and mid “5.0” magnitudes with a “5.3” occurring in the Central Mid-Atlantic Ridge.

Earth/Gaia is riding the waves of the “Cosmic Sea,” and we are riding with “Her.”

The height of the Mercury Retrograde is from December 29th to January 18th of 2023 with its post-shadow being until February 12th when it will move into Tropical Aquarius.

Due to all of the foregoing cosmic events, our planet will host further strong flares, CMES, winds, magnetic field density, and geomagnetic storming as it moves closer to Pluto’s change from Tropical Capricorn where it has been since 2008 to Tropical Aquarius on January 24th of 2024 where it will remain for twenty years—two decades!

As Richard Tarnas, Cosmic Scientist, states: “Pluto rules all that is titanic, potent, and massive.”

Science will move further forward with technological developments, and we must pray that such developments are advantageous for our planet and its inhabitants and not harmful.

As I have discussed previously, Aquarius symbolizes the collective—the group rather than the individual—and there will be a greater collective awareness of consciousness and major protests against political policies and social programs that are not for the greater good.

Although Aquarius is considered to be an “air” element sign, in ancient times, it was a “water” sign.

There is the likelihood of solar winds, storms, and flooding on a massive scale and the shaking and pulling apart of our planet that many have mystically seen.

Pluto completely transforms whatever the sign it is in characterizes.

While it has been in “earth” element Capricorn, there have already been destructive earthquakes, tornadoes, and hurricanes.

There have also been serious issues with the economy, in politics, in corporations, in businesses (small and large), in education, in medical research, with the military, with the police—all global Capricornian representations.

There is yet more to transpire in these arenas before Pluto moves on.

We must remain also aware that we are in the “Twilight of Kali Yuga” (“Age of Chaos”), so information on it is being repeated here for emphasis.

At such a time as this, planetary conditions are most critical. Everything that is disharmonious must be discarded and what is still workable must be transformed to a higher state.

Ancient teachings are that in a “Kali Yuga” era, only one-fourth of all of humanity are elevated in consciousness or even making the attempt to do so.

It is as if free will is no longer allowed to reign and as if humanity has been given a chance and has not used its free will righteously.

However, for the small percentage who have endeavored to employ free will in a correct manner—in alignment with Divine principles—there are blessings and encouragement to carry on regardless of what may be witnessed as others are struggling.

When the next age arrives—“Dwarpa Yuga”—which is supposedly due in 2025—situations will be such that there will be a tremendous rise in collective consciousness until one-half of the inhabitants of Earth/Gaia will awaken to a spiritual-orientation rather than its current fixity on money, fame, control, material greed, hatred, war, creating genetically-engineered food, poisoning the environment, tampering with Nature, and more vile happenings.

There will finally be a realization of what has been allowed to happen on and to our planet and all of creation.

However, much destruction may be the Plutonian force that drives the realizations.

December is a time when holidays are most exciting.

For example, mankind prepares for Hannukah, Christmas, and Kwanzaa.

Homes and businesses are decorated; gifts are purchased (or made); holiday songs play on loudspeakers as people shop; students are restless and cannot easily focus on their studies with the excitement of the coming holidays, and teachers and administrators also look forward to holiday vacation.

Charitable organizations are more active in their asking for donations; in general, people seem a bit kinder and smile more.

This particular holiday season will have two types of mindsets: There will be people who are very excited and in the throes of preparation because they are tired of the troubling mainstream news and tired of lockdowns and wearing masks due to the “plan-demic” (excuse my political opinion being thrown in here), but there will also be people who realize that to completely ignore the problems still occurring on our planet threatens denial, and when people are in denial, they make poor choices—especially if they are unaware of “Cosmic Science” or unaware of the profound space/time continuum that we are experiencing which demands focus on HIGHER KNOWLEDGE, and thus, on SOURCE FREQUENCY.

With all of the cosmic events dashing out of the gate this month like horses in a race, this particular December offers opportunities for self-reflection, review of individual and collective circumstances, and of quiet times of family prayer and meditation.

Celebrations are fine. Joy is wonderful to have.

However, children are still suffering in hospitals; people are starving in various nations; war is raging in known places and in unknown places (because mainstream news tends to focus only on certain well-known countries); racial groups are still arguing about each other’s histories; laboratories are still manufacturing dangerous drugs and using fear speech in an attempt to force people to stick out their arms and be “jabbed”; many people (not all) are campaigning for political positions just to make money and not because they truly care about their so-called “constituents”.

In other words, if the message is not clear yet—WE ARE IN A TRANSITIONAL PERIOD THAT REQUIRES INTELLECTUAL AND SPIRITUAL DEVELOPMENT.

This indicates that mankind must not, of course, be sad-faced beings crying “Woe are we,” but mankind must be attuned to thoughts, feelings, words, and actions that are illuminating while engaged in celebratory festivities.

Why not, for instance, forego that big screen television and give a large donation to “Saint Jude Children’s Research Hospital” or another righteous charity and not a bogus one where most of the money goes into administrators’ pockets rather than being given to those who are actually supposed to receive most of the funds?

This December, instead of saying “Happy Hannukah” or “Merry Christmas” or “Habari Gani”, why not say “HOLY ILLUMINATION!”.

As our solar system, our galaxy, and our planet surges further upward into the LIGHT and is activated by that LIGHT, we can be too.

In fact, the LIGHT is going to become constantly brighter and stronger in its “messages” anyway.

What is left of mankind’s free will is to either receive the “messages” or ignore them.

Those who decide to ignore them will be left in strife and struggle—their choice.

Those who choose to try to understand the messages and to heed them will be blessed in ways that cannot be described.

There are no words for the treasures that await us.

So, as the cosmos steadily sends its energetics via the permission of SOURCE—the “Orchestrator” of them—let us sit this month in deeper concentration while we wrap the gifts, sing the songs, eat the delicious festive foods, and watch holiday movies.

Some people may wish they had done so by spring of 2023 when the “Eclipse Season” that is still vibrating finally becomes a soft whisper.

Our planet is about to be no longer referred to as “The Blue Planet” but as “The Planet of Sparkling Crystalline LIGHT.”

We have 1308 guests and no members online