Earth Crystal Vibrations From 3D To 4D And 5D 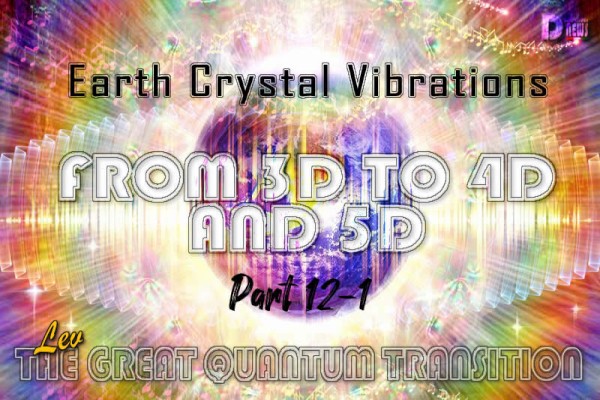 Located on the Moon at 23D, Siriusian’s base, tasked the near-Earth and ground space monitoring, keeps strict watch Earth’s transition to 5D.

As of July 20th, 2021, at 9:07 AM CET Lunar base’s minute, the Earth Crystal’s Vibrations have ripped and uplifted the planet’s core power shield to a new level. It amplified the exit of finished plasma vital 5D energy to the cortical layer.

Simultaneously with the output of the 5D plasma, its channels – the rays system – are transformed, enhancing energy flux.

At the points of concentration, it thickens.

The translation of the synthesized energy is constantly increasing.

Quantum waves continue to exit through the Northern Pole.

Four-dimensional space is actively flowing into 6D, where a new 5D Matrix and its rays system are finishing to built.

It, in turn, actively transforms the nucleic sequences. These high-molecular organic compounds are present in the cells of all living organisms and perform the most important functions for storing and transmitting genetic information.

The energy fields are combined. It allows receiving and accumulating more concentrated Source radiation coming to the planet.

The astral layer is programmed to accumulate energy in the force fields. They cyclically split the spent plasma, separate the viable parts, and transfer them to another sphere. There it congregates and then translates into other dimensions to form worlds.

The 5D energy coming from the Hologram is actively materializing on Earth, transforming the entire mineral, plant, and biological realm for the fifth dimension.

At present, the Hologram is sending programs that force us to choose: either follow the path of spiritual development or continue our former life.

Many of us choose the latter. The swamp of established life and old habits is sucking them in deeper and deeper. It’s hard to make a decision and stay morally afloat in these times of dramatic changes.

It is an open and rigid selection process. If we compromise ourselves, we lie to ourselves. And this is not the whole story.

Compromise changes the energy fields of the cells, lowering our vibrations. They don’t fit into the rising vibes of the planet. Unable to cope with them, our bodies begin to get sick. It is one of the causes of the current pandemic.

Interplanetary energy ejects are changing the physics of Earth, all thermal and meteorological processes.

Everything points to that by the numerous earthquakes, temperature surges, wildfires, tornadoes, unprecedented rains, and floods.

During heavy rains in Belgium, Austria, and Germany, up to 100 liters per square meter fell.

Even carefully projected reservoirs and dams couldn’t withstand such volume. They were designed and built according to old standards. The infrastructure can’t cope with new physics.

Technicians had to discharge overestimated amounts of water in order not to destroy dams and levees.

It causes floods along the rivers. People don’t even have time to evacuate themselves, not to mention the most dangerous things – warehouses, chemicals, fuel, and reactors, dealing a blow to ecology and industry.

Similar rain super fronts will recur, moving from West to East, skirting the Earth, and bringing typhoons and flooding everywhere.

The physics of lightning has changed. The thunderstorm fronts have become longer.

The pressure differentials are gigantic. It causes super winds.

The infrastructure is unprepared for that. That’s why houses and vehicles are blowing off. Gusts can topple planes, trains, buses, and trucks.

Heavy rains wash away the ground. Landslides descend on houses and roads.

Railway tracks and tunnels are destroying.

The new era requires new solutions and, most importantly, a NEW approach to safety.

Unfortunately, those who run the infrastructure and govern the population do not understand or WANT to understand it. Whether intentional or not is a separate topic.

The world must take what was worked out by the ancestors – unity, security, safety, and therefore the training of the population.

Primary budgeting for rescue services, engineering infrastructures should be increased.

The professions of the rescuers, firefighters, law enforcement, educators, doctors, engineers – should become the mainstay of the state and be funded in the first place.

We plugged with pictures reminding us again and again: our world is one, not “the golden billion and all the rest”. We are pushed to a new level of consciousness and thinking for surviving in 5D.

We have 1614 guests and no members online