Ashtar: The New Earth Is Ready 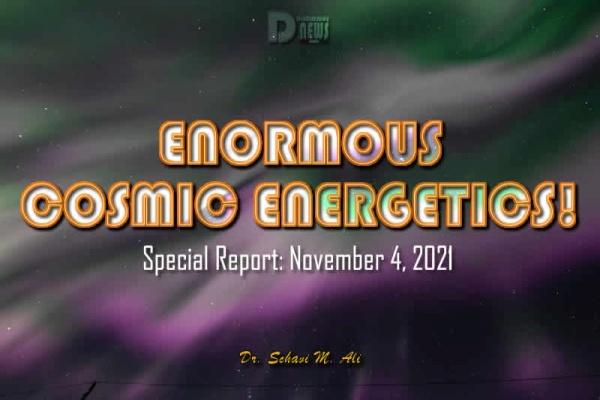 Earth/Gaia and “Her” inhabitants are experiencing the most massive cosmic energetics in recent history!

This morning, Thursday, November 4th, 2021, at approximately 6:50 AM (EST), solar winds were traveling at 813.3 km/s (kilometers per second) which is almost over 2 million miles per hour.

Huge colorful auroras, which indicate atmospheric radiation, are being seen at the Arctic Circle.

A Coronal Mass Ejection (CME) which was calculated to arrive late last night at about midnight (EST) arrived earlier in the afternoon at about 4:00 PM (EST), and another one followed later in the night.

The magnetosphere chart of our planet shows that Earth/Gaia is enveloped in red which is indicative of huge plasma waves activating both the inner core and the outer field.

When blue coloring surrounds the planet in the chart, this is a sign that the planet is calm and blissful and that no significant disturbances to “Her” fields are happening.

With the first CME having arrived much earlier than expected, this illustrates that it is very fast moving, and when a CME moves very quickly, it is extremely powerful.

Solar flares, however, are in the “C-Class” range (medium-strength), but there are indications that strong “M-Class” flares could soon occur.

CMEs which years ago seemed to have come after powerful solar flares, have been occurring on their own without the need for solar flares preceding them.

The science texts of ancient civilizations (especially the Vedic ones) seem to have been futuristic in their accounts because much of what is written about the cosmos is happening in the “Now”.

These cosmic dynamics on November 4th have arrived just prior to the New Moon this afternoon at approximately 5:15 PM (EST), and today is also officially the celebration of DIWALI (“Festival of LIGHTS”) whose greeting on this day is “Jai Diwali” (“Victory to the LIGHT”).

A detailed article on DAWALI was written earlier and posted by “Disclosure News Italia”.

The Sun and the Great Central Sun are obviously blasting their greetings to us on this auspicious occasion.

Later in the morning, the solar winds receded slightly to being just above 600 km/s which is still very high.

These winds may not be discernible in terms of trees swaying or hats flying off of people’s heads or vehicles wavering in their lanes.

THEY ARE FELT in the physical, mental, emotional “selves”, and THEY ARE DETECTED by certain sophisticated technology as well as being capable of being seen by people in terms of the huge colorful auroras mentioned above as an example.

Also, usually powerful earthquakes (above 6.0) can happen along with various types of weather occurrences such as storms and floods as Earth/Gaia is activated.

Energetics this strong can cause intensified “Light Activation Symptoms”, and many people are already reporting profound exhaustion (even after a peaceful night’s sleep), anxiety, dizziness, nausea, head pressure, ears ringing, and strange dreams (some, however, were unable to sleep last night with the energetics being so heavy).

Other people have been experiencing elevated vitality for about two days, but as these current cosmic forces have arrived, their energy seems zapped!

Many are seeing flashes of color in the atmosphere–auroras.

All of these “symptoms” (and more) are acclimations to the potent LIGHT that is surging into our planetary home, and of course, into every aspect of our physical vessels causing not only physical discomforts but also mental and emotional imbalances so that what is not good for us to store in our cellular records can be eradicated.

We must continually realize that creation is in a transformative, i.e., evolutionary process of consciousness elevation and crystallization of our very “being-ness”.

As has been stated in previous articles, cosmic energetics will continue to ramp-up throughout the autumn of 2021 and into the winter and spring of 2022.

Certain planetary geometrical angular activations are messages of this as well as the conditions on the planet which are quite challenging politically and sociologically.

Off -Earth higher-aware “beings” are also working for our elevation via the permission of SOURCE.

They have been in our midst for many ages of the space/time continuum, and this is not science fiction. Many people are, of course, uncomfortable with this type of information because they have been taught that unless something can be actually detected with the five senses and makes sense to logical left brain inquiry, then it is not real.

Yet, there is much that is being kept from the so-called “common” populace of all nations because if disclosure were to truly be given by credible, respected, scholarly persons in key positions throughout the world, there would be mass fear and erratic behavior. (There is already fear and erraticism due to other circumstances).

However, some credible people are slowly revealing information to certain people about “ET” contact that has yet to be reported by mainstream media just like the daily news, sports, and weather is reported.

The truth of this will be known by the citizens of Earth/Gaia in the not-so-distant future.

We must, however, realize that there are some people who unfortunately are indeed not mentally or emotionally stable who are delving into “extra-terrestrialism”, and thus, we must be discerning regarding just believing anything from anybody.

All will be revealed in broad daylight when it is deemed safe to do so.

This is another reason why so much cleansing and clearing is being given to the planet and its inhabitants. A certain level of Higher Consciousness must be installed before particular knowledge can be received.

As the very powerful solar energetics continually soar into our planetary spheres (ionosphere, stratosphere, atmosphere, etc.), opportunities for regeneration are given as our DNA is made new and wired for LIGHT AND SOUND TRANSMISSION AND RECEPTION.