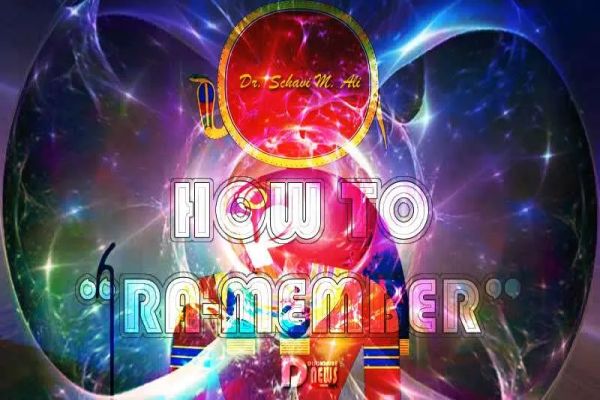 No, the title of this teaching is not a misspelling.

The word “RA” is from the Medu Neter (“Sacred Speech”) language of ancient Kemet, and it translates as “LIGHT” and is a reference to the Sun of our galaxy which was called “ATEN” which translates as “SOLAR DISK”.

The word “MEM” is both Medu Neter and Amharic (one of the “Parent Languages”of Hebrew) for “WATER”.

Water is one of the group of elements known as earth, air, fire, water, and ether—all of which we are comprised of and which also reside in all of creation.

An old saying is “The Spirit moves upon the face of the waters”.

In other words, water can be a powerful conduit to HIGHER KNOWLEDGE and a connection to SOURCE, especially as we “ride” the “Cosmic Sea” of potent solar energetics.

From our Sun we receive nutrition which feeds each part our physical vessels (muscles, bones, glands, nervous system, etc.) and which also orchestrates elevation to greater states of consciousness via its action upon the “GOD CELL” situated between the right and left hemispheres of our brain—thus, there is both a material and a metaphysical component to the Sun’s actions.

Today is a superb day to sit by a lake or pond of water (MEM”) and to meditate while allowing the Sun (“RA”) to bathe us in solar LIGHT.

The specific message of “MEM” from the spiritual science of Kabbalah is: “Venture into the depths of the Soul because the sea of human consciousness is powerful. Intuitive knowledge is a vital key. Become aware of spirit guides”.

For the past several days, the “Cosmic Sea” has been raging with power.

Multiple coronal mass ejections (CMEs) are soaring into our realm, and solar winds could reach into the high 600 km/s levels or even into the 700s based upon the swirling envelopment of our magnetosphere in particle plasma being pressed into it by the exceedingly high solar winds.

The “KP Index” has been given a “Storm” rating, and neutron counts (cosmic rays) are “Elevated”.

The potential for manifestation of thoughts and feelings is very profound!

Cosmic energetics can be “thought and felt into” almost like an artist who already has the idea for a painting or sculpture or book before it actually exists in material form.

The thought had an electrified frequency, and the emotions about the artform became magnetically attached.

With enough electricity and magnification, the artform becomes visible as a painting. statue, or piece of literature.

Water can be soothing, but it can also rage with destruction and flooding bringing strife which is known as “Pralaya” in the Sanskrit language.

Collective Consciousness has much to do with this.

So, even if you are having heightened “Light Activation Experiences” (“Ascension Symptoms”), get to a body of water, and engage in prayer and meditation.

Take a journal with you to record any revelations that you receive.

As has been previously mentioned in other articles, the next several days (even weeks and months) has the theme ” GREATER LIGHT AND SOUND TRANSMISSION AND RECEPTION PORTAL”.

Think also about what the collective is transmitting and receiving.

Pray for a powerful elevation of the planetary collective.

It is possible in this “Now”—the “Twilight of Kali Yuga”—to attain the HIGHER KNOWLEDGE needed to quickly transform existence into the “Paradise on Earth” that many scriptures discuss.

Are you ready for PEACE?
ABUNDANCE?
LOVE?
WISDOM?

Then you are ready for “RA” and “MEM”to assist you.

Stay in the LIGHT and sit upon the water!