How To Read The Schumann Resonance Chart 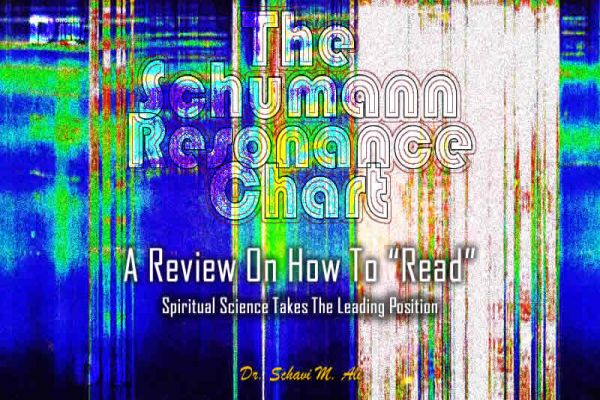 As has been expressed recently, with the month of January of 2022 being so packed with cosmic events (strong solar wind streams, heightened solar flares, coronal mass ejections, soaring of “Comet Leonard” throughout the skies, the Full Moon, Mercury going retrograde [January 14th to February 4th]), etc., this provides an excellent time frame for reviewing various aspects of the cosmic forces.

One of the most important types of information to review is the “Schumann Resonance” chart.

This scientific technological research was studied and analyzed for several years and finally officially published by the German Physicist, Dr. Weinfried Otto Schumann, in 1952; and thus, the “Schumann Resonance” was named after him.

The “Schumann Resonance”, defined in brief, deals with a set of spectrum peaks as lightning strikes our planet and proceeds to activate its inner core and outer field.

This lightning happens daily and is not merely the result of thunderstorms occurring on our planet.

The lightning is electromagnetic vibrations driven by the Sun of our galaxy which receives its energy from the Great Central Sun—both being powerful portals of energy.

Earth/Gaia also has electromagnetic vibrations in “Her” core which move up into the spheres surrounding “Her” (stratosphere, ionosphere, atmosphere, magnetosphere, etc.).

All cosmic energetics are “conscious”, and this includes all planets and other phenomena happening in and around the planets.

In other words, everything has ENERGY and this is LIFE FORCE.

The “Schumann Resonance” chart registers our planet’s FREQUENCY (cycles per second of waves of ENERGY) and the AMPLITUDE (magnitude, range, strength of incoming FREQUENCIES).

The chart is comprised of various color waves—some vertical and some horizontal—all on a square or rectangular canvas.

When the chart shows large wide white splashes, this is indicative of huge amounts of LIGHT coming into our planet—within our galaxy as well as outside of it— which carries informational codes that re-set, regenerate, and upgrade our DNA, particularly at the mitochondria level which is the information receiving aspect of our DNA.

Usually at such times, the numbers that are termed as “POWER” are shown as double or triple figures (in recent years, the number reached a four-figure 1200)!

In the ancient past, “Rishis” (“Sages”) received Divine revelation that allowed them to calculate the turning of our planet on “Her” axis as “7.83” cycles per second—a very slow pace indeed compared to the turning in the “Now”.

In the past “Golden Age”, known from the Sanskrit as “Sattva Yuga” (“Age of Peace”), there were Paradise-like conditions such as tropical weather across the globe; there were no wars; everyone was healthy and lived long lives and even immortality was offered; all people were loved and respected; no animals were slaughtered for food or fashion; and there was a close connection to the DIVINE ABSOLUTE— SOURCE— who was known to have many characteristics and aspects referred to as “Devas” and “Devis” (“Shining Ones”, “Lighted Beings”) or “Neteru” (“Divine Forces of Nature”).

With the sliding down over hundreds of thousands of years into “Kali Yuga” (“Age of Chaos”) due to misuse of human collective consciousness whereby only 1/4 of humanity remained in higher mind frequencies, the turning of the planet on “Her” axis was sped-up, and “She” began to be sent potent LIGHT that began (and still is) leveling-up the planet to a higher place in the cosmos where vibrations are faster and where LIGHT is more amazingly profound.

Therefore, the cycles per second have been elevated so that the LIGHT can soar in and through our planet, throughout the solar system, and into all of creation with the kind of magnification that clears-out and cleanses old programming.

To use a biblical metaphor, the HOLY BIBLE says that “new wine cannot be placed into old wineskins”.

The reddish-orange dots throughout the green coloring represents even stronger blockages.

When there is a total black-out—no white splashes, no green, no reddish-orange dots—this is when the LIGHT is coming into our planet in such power of clearing and cleansing that the technological equipment cannot register it.

This does not indicate that human consciousness has risen to such great heights that we are being given enormous LIGHT just because of this as some sort of reward.

It is actually just the opposite.

Human life has become so depleted of truth and righteousness that SOURCE has decided in “ITS” supreme authority to send surges of LIGHT to our planet and solar system that forces opportunities for a collective “consciousness correction”.

Thus, conditions will have become so utterly out-of-tune with the “Divine Symphony” that alterations will need to be made to our planet.

This is when Earth/Gaia will have traveled up to a tremendous height in its placement in the “Cosmic Auditorium”.

Its FREQUENCY and AMPLITUDE cannot be registered by any “man” (from the Sanskrit “manas” which translates as “consciousness”) “kind” (“type”)—“mankind”—“type of consciousness”.

No equipment has been invented that can register SOURCE LIGHT!

The equipment can only go so far in its numerical registrations, and to avoid overload when it seems that LIGHT will destroy the equipment, some scientific institutions may turn down their system so that the numbers may seem lower than they truly are in the “Schumann Resonance”.

Think of another simple metaphor: a 140-watt bulb cannot (or should not) be placed into a 40-watt lamp.

Mankind cannot always calculate the doings of SOURCE no matter how hard the effort may be to rival the INFINITE PRESENCE.

Our HIGHER SELVES are now more encouraged to be the “Spiritual Technology” that “knows” when LIGHT is streaming in at magnificent speed and strength.

“Light Activation Symptoms” can become heightened due to the LIGHT surging into every atom and sub-atomic particle of our physical vessels—upgrading and encoding.

We are encouraged at these times to rest more, to drink lots of spring water with lemon, and to engage in the spiritual rituals of our paths for comfort and blessed assurance.

We are not participating in a so-called science fiction movie.

What is occurring in our “Now” is REAL!

When the chart is an overall soft blue coloring, this indicates complete calm—a great peace has settled into the collective.

This may not occur any time soon as humans calculate “time” because much clearing-out and cleansing is still happening at the “3d” level.

Consequently, as solar flares and winds intensify, as coronal mass ejections continue to spew particles of gamma rays across the cosmic field with signs of this arriving as colorful auroras, as the magnetosphere fills-up with cosmic energy from all of the foregoing, and as more “songs” are played in the “Cosmic Concert”, the “Schumann Resonance” chart will be a canvas of wide white splashes at times, of green, of reddish-orange spots, and of the most telling of earthly conditions—BLACK-OUT!

Interestingly, therefore, the wider and longer the BLACK-OUT, the greater the LIGHT!

Remember the word “Guru” translates as “BRINGER OF LIGHT FROM DARKNESS”.

SOURCE is the ULTIMATE GURU!