Into The Influx! - Cosmic Update

Into The Influx! - Cosmic Update 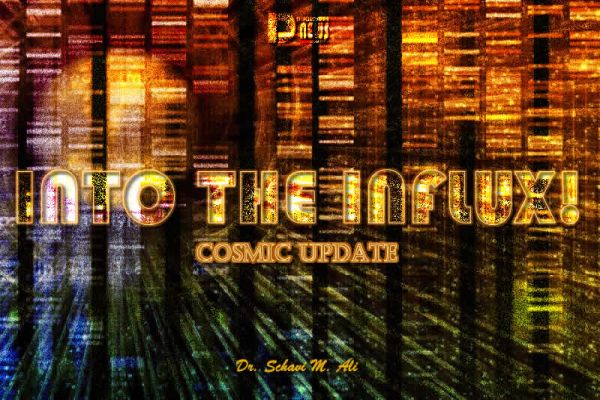 Energetic particles of LIGHT are again entering Earth/Gaia’s far side from outer-galactic frequencies and being delivered into “Her” magnetosphere by elevated solar wind streams traveling at over 500 km/s (kilometers per second) on Friday, February 4th, 2022.

Solar flares thus far are in the lower “C-Class” numerical ranges (such as “C.2” or “C.6”), but this is likely to change as further cosmic energetics enter into our planet’s inner core and outer field.

Ringing in the ears, aching backs, anxiety, and feelings of fatigue seem to be the major symptoms of the current incoming LIGHT CODES according to reports from people around the globe.

All of this deals with the often mentioned LIGHT AND SOUND TRANSMISSION AND RECEPTION.

The LIGHT deals with the messages or codes coming into the “Nadis” (Nerve Endings) and moving throughout the entire physical vessel and also the resetting of DNA and cellular records.

Both “Spirit” and “Intellect” must work in harmony in order to understand the past, the present, and the future.

When the codes first arrive, they spark a hunger for information and a sense of self-actualization.

Accordingly, old programming begins to be released which contains, among other things, the realization that certain concepts and ideas have been especially “designed” to control the human population by those whose focus is manipulation and subjugation so that all planetary resources are for them alone as they proceed to also tamper with Nature in numerous ways.

SOUND consists of actual sound frequencies of other dimensions (the higher levels of consciousness), of our planet and also of other planets, of the winds, the trees, the birds—all that has been created by SOURCE.

In other words, as consciousness shifts higher, communication with various aspects of Nature can easily be achieved.

Ancient cultures have been doing this for eons in the space/time continuum. So-called “modern mankind” has closed itself off from LIGHT and SOUND as experiments with changing and manipulating Nature has been/and is still being done.

Such persons, for example, do not believe in the “consciousness” of crystals or gemstones which have been proven to have a vibrational frequency.

They refer to the animals as “dumb animals” when the truth is that animals have senses that the average human does not have, and they have communication capability.

Why else would police departments use dogs, for instance, in their investigative procedures, and why would dogs be employed by certain organizations as service animals for those humans who require specialized help?

Why does the sound of heightened wind alert us to the possibility of a coming storm?

Why do the particular sounds of birds have messages?

Why does softly pattering rain on a window ledge cause many people to become drowsy and have a restful sleep?

Many, many other examples of how Nature “speaks” to us in gentle as well as in powerful ways could be given here.

Having an audio-psychic experience during meditation is also a SOUND transmission.

Everything created by SOURCE has a vibrational pattern, an oscillation of energy, and energy is “Life Force”–the “Ankh” of Kemet, the “Prana” of Bharata, the “Chi” of China”, the “Ki” of Japan, etc.

As our solar system and our entire galaxy is transformed with solar flares exploding along with coronal mass ejections, and as solar winds exceed normal levels of intensity, and as our planet’s magnetic shield is entered into with potent plasma particles— it all will be felt and realized by increasing numbers of humanity that “Something is different”; “A strange new normal is on the horizon”.

There is a wonder in the human collective—a willingness to consider that what Yeshua Ha Messiah said thousands of years ago is true: “At the end of the age, there will be signs in the Sun, Moon, and Stars.”

Not only is LIGHT zooming into us.

We are literally traveling into IT.

We are receiving DIVINE INFLUXES OF LIFE FORCE.