Is Humanity A Hybrid Species? 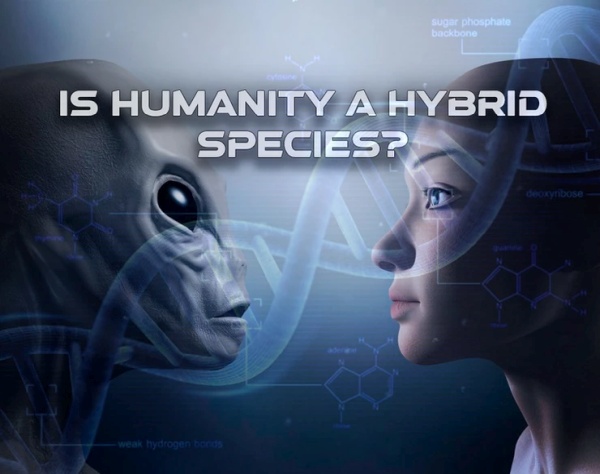 Humanity is one of the most advanced species of the planet, as they express almost an exponential growth in the development of their intellect and the development to manipulate Nature. This evolutionary path has not been a straight continuous linear path but rather a progress full of non-predictable evolutionary jumps and really specific genetic recombination's, that has lead to the observation of the so called "lost steps "on the scalar evolution. The inability to trace the origin of certain genetic changes and explain such evolutionary jumps.

What is really evolution from a biological perspective? The adaptation to the environment or the ecosystem that one species lives in, with its biological elements and with the other life forms that coexist with them. Then, what changes in the environment that humanity had to face by then could have triggered such expansive changes in their genome? Actually, humanity was already adapted to their environment generally speaking, and orienting their evolution towards the idea of physical strengthening and harmonizing with their ecosystem more in the way they were already expressing, not manipulating it. Manipulation was really not necessary, as we were surviving enough to be able to preserve our existence with the intelligence that we were developing and the awareness of how our physical characteristics were advantageous for such life-style. Stronger teeth, hands, more prominent stronger jaw, bigger nostrils, ears, and more, were features that would promise our survival, and a similar life-style and intelligence as the ones that the other thousands of animal species of the planet presented. So, what happened to trigger such an evolutionary jump? Nothing. Really nothing.

We, as we used to exist, had enough survival rate and level of adaptation to the environment that we were living in, so any changes made within the human genome have really no attribution to any natural factors or events.

How is that we changed then, so fast and in such a dynamic way, to develop such an ability to manipulate nature? The only plausible answer here, would be to consider the idea of a genetic intervention.

One of the most obvious proofs is the RH negative factor. It doesn’t have a specific root or detectable origin, reason to appear, nor function of adaptation that we know of. And we can agree that, evolution is based in the recombination of genetics, not the random creation of new ones, and needs a biological external factor or event that would trigger the DNA molecules to mutate, and if there would have been one, then it would indeed have affected at least a minimal number of the other species that were coexisting with us.

So, again, the idea of a genetic intervention is the only answer that would make sense of such an spontaneous genetic mutation in the genome of humanity. And since there is no other more advanced species in the planet, the only origin that this genetic altering source could have came from, its extraterrestrial. An extraterrestrial intelligent advanced species, with specific interests and technologies, that could have made possible the re-creation of our species, if not, the creation of the species we are now, as we seem then, to be of a hybrid nature, and thus, not really being part of the same species as our hominid ancestors.

We can conclude then, that humanity is the result of a genetic intervention between extraterrestrial advanced species and our hominid ancestors, giving us the essence of a hybrid species, which is the reason that explains our highlighted potential amongst the rest of Earth’s species.

Marina Seren
My name is Marina Seren. I am a 20-year-old Experiencer from Madrid, Spain. I am a psychic medium, an extrasensory-seer, a conscious channeler of my Higher Mind, an intuitive artist, an ET contactee, alien abductee, hybrid alien mother, MILAB/MK-ultra survivor, and an ex-Secret Space Program psychic supersoldier/insider. In the year 2015, when I was 15 years old, the wake-up call encoded in my DNA activated and I started my path of spiritual awakening and the recovery of my memories. I started to receive intense downloads on the structure of consciousness and existence and information about what is really going on on Earth, what is the real history of mankind, and what is my mission here.​At that time I observed my Starseed/hybrid nature as well as the indigo/crystal energy of my aura. I started to experience strongly the awakening of my psychic abilities and ancient knowledge, activated DNA codes placed by other beings, remembered my hybrid genetic implants and my role in the First Contact event. I was starting to be visited by ET/ED entities, guides, counterparts, and star families. I would meet them in the dream time, I would travel to their planet, I would recall some of my ET and Earth past lives, I would be taught in spacecraft schools about psychic abilities and metaphysics, as well as spiritual guidance. I am currently working on many projects, many of educational nature, in which I teach about my spiritual wisdom and metaphysical knowledge, my ET downloads, my information about the preparation for the future First Contact, and my Higher Mind's guidance that I bring through my conscious channeling abilities. On the other hand, I also dedicate myself to the field of arts, especially graphic arts and music, which of course includes channeled energies from the higher dimensions that I perceive. https://www.marinaseren.com