And Still We Rise

January 2022: Preparing For The New 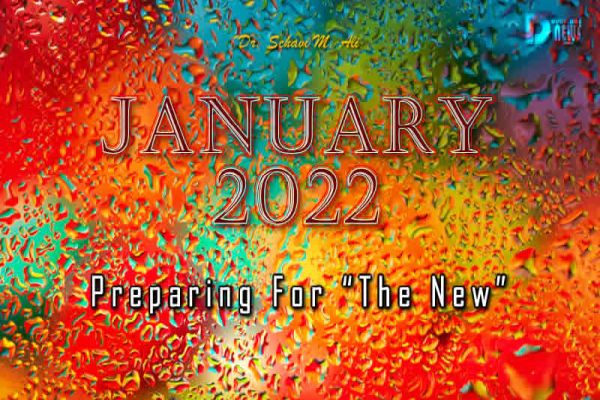 On Sunday, January 2, 2022, Mercury, the planet of thought frequencies, communication, brain function, and messages, moves into Aquarius in the Tropical Zodiac—the sign in which it will retrograde from January 14th to February 4th.

This is also the day of the first New Moon of 2022 which occurs in Tropical Capricorn.

The same is the case with planetary retrogrades, and in this case, we are dealing with Mercury’s entrance into Aquarius.

However, because the New Moon of January also enters the “Cosmic Auditorium” along with the opening of the Mercury retrograde portal—which is known as its “pre-shadow”—this is not an opportune time to move full speed ahead.

Rather, it is time to be internally focused and to think about future actions and what the possible outcomes could be because of them.

With the New Moon being in Tropical Capricorn (the sign of Capricorn is governed by the planet Saturn), January’s major energy will be that of lessons to be learned, the need for better organizational structure, military situations (which also concerns police activity), the operations of big business (corporations, industries, smaller businesses, schools, even religious institutions), major governmental laws, policies, and procedures; the need for discipline and discernment; and restrictions either self-imposed or mandated by outside authorities.

In the USA Tropical chart, the sign of Capricorn is on its second natal house.

This is the house of finances and material concerns.

There will most likely be dramatic happenings in economic structures both within the USA and with its allied nations.

The major issues will be slowly stirred-up due to the coming Mercury Retrograde, and after Mercury is direct, new economic situations will speed up–some to people’s liking and some to people’s frustration.

Just as a planet is going retrograde and just as it is becoming direct, its energy is magnified.

Watch for magnifications in this first week of January 2022 (with the entrance of the New Moon), as Mercury goes retrograde (January 14th) and then again as it moves direct in early February. Be careful of unnecessary spending.

Along with all of the foregoing, cosmic events are very powerful: elevated solar winds (in the upper 400s and over 500 km/s), strong solar flares (in the upper “C-Class” and “M-Class” ranges), coronal mass ejections whose symbols are colorful auroras, and a planetary magnetosphere that is pressed into and filled with plasma waves from all that has been just mentioned.

Serious weather patterns have already happened such as earthquakes over 5.0 on the Richter Scale in many places, a damaging tornado in the state of Kentucky (USA) and storms and floods in other places in the world as well.

Earth/Gaia is being still further cleansed and cleared of many eons of troubling occurrences and is receiving even greater amounts of healing and elevating SOURCE LIGHT—and so is all of creation upon “Her”.

Upgrades to DNA and cellular records is not over merely because we have entered into a new “Gregorian” timeline year.

SOURCE is not concerned about human-contrived dates and times or numerical philosophies.

SOURCE has “ITS” own methodologies and space/time continuums and does indeed give us messages based upon the COSMIC HOLY BOOK.

SOURCE has allowed humanity to learn about and to be able to calculate planetary angles and their vibrational frequencies and solar system energetics and galactic modalities.

Humans do not control these forces; they are only learned about and can be worked with for planetary betterment.

However, there is a caveat.

Collective consciousness does send messages into the ethereal realm via thoughts, emotions, words, and actions like sending a telegram to someone that is later answered in some manner.

Let us take a look at the story of Noah in the scripture called HOLY BIBLE.

Many people believe that there was an actual “Noah”, that an “ark” sits atop a place called “Mount Ararat”, that a flood destroyed the then known world all except for Noah’s family.

Too many people are not yet ready to understand that many holy books, which includes the HOLY BIBLE, use lots of metaphors as lessons.

The character “Noah” represents a type of human consciousness—one which believes in and follows sacred principles.

The “ark” represents a place of safety—away from the “storms” of life. It also represents various arks of stars in the heavens.

The “dove” is a re-working of the old “Neter” (“Divine Force”) of MAAT of ancient Kemet which symbolized TRUTH, JUSTICE, BALANCE, HARMONY, and RIGHTEOUSNESS.

Noah gathering two of every kind of animal on the planet represents human levels of consciousness—all of which have opportunities to be “saved” from the “storms of life” if they enter the “ark of safety”—belief in and anchoring to SOURCE LIGHT.

Those who laughed at Noah in the story were those who did not believe in Divine principles and did not heed the warnings which came in various ways over a long while.

Thus, they “drowned” in their own arrogance, ego, and disbelief.

The same messages are extant in other holy texts.

In the BHAGAVAD GITA, for example, the war fought between two family factions represents the human struggle between the lower self and the HIGHER SELF.

In the HOLY QU’RAN, there is the teaching of the human inner struggle taught as “jihad” (“Holy War”).

Yet, there are those of the Islamic persuasion who have taken this literally and wage war against anyone who is not of their particular religious orientation.

For many ages, humanity has used so-called “religions” to hate and destroy each other.

“Mama Earth/Gaia” has been harmed by such chaos and is no longer tolerating it!

Nor is SOURCE who has given humanity dominion—via its use of consciousness, i.e., free will—to create its own planetary conditions.

However, with much of humanity unable to lovingly be with one another on the planet, SOURCE has now increased “ITS” SACRED LIGHT FREQUENCY for transformation.

Mankind is being given a consciousness correction.

Looking at the word “Mankind”, the phoneme “Man'” is from the Sanskrit “Manas” which translates as “Mind” and as “Consciousness”.

The word “Kind” is defined as “type.”

Thus, to be labeled as “Mankind” is to have a “type of consciousness”; thus, do we revisit the “Noah” story and others of its kind in the world’s holy books.

Many of the stories deal with how use of consciousness can create certain circumstances.

If time were taken to do a detailed exegesis of the world’s major holy books (and this requires many years of intense study), people would be astounded and shocked at what would be revealed.

Some of us have been blessed to do such studies, and we are still studying.

The studies are wonderful and amazing!

While the year of “2022” has been titled as THE YEAR OF THE GREAT REVEAL”, the month of January is THE MONTH OF INNER GUIDANCE.

Use this month to journal about world events and how they are related to cosmic happenings which occur; think about changes that are best made for your peace, comfort, and closer connection to SOURCE; consider whether or not you are truly following the principles of the path that you claim to believe in or even if you actually understand your path; wear your favorite prayer mala daily as a sacred vibration of SOURCE FREQUENCY; wear fragrant, calming, healing oils; engage in healthy exercises.

Also, get out in Nature and observe the natural canvas of the ULTIMATE ARTIST—free of “mankind’s” concrete and steel.

All of this will send your personal “telegram” into the ethereal realms for answering back with renewed vitality, higher knowledge, abundance, joy, and a closer relationship to SOURCE.

A new planet is coming into manifestation more dynamically for some than for others because we are attuned to the “Divine Symphony”.

Over many years, we have worked on “tuning-up” our “instruments” (spiritual paths, physical vessels, emotional settings, activities).

No one need be left behind—unless they really choose to be left. The concept of “New Earth” deals with a new collective consciousness in a very large percentage.

There is not going to be two material “Earth’s”.

Yes, in reality there are many planets which are filled with life and which can hold life.

Many are just like our planet and have lots of water.

We are speaking here, however, of this particular planet known as “Earth/Gaia” and as “Geb” in ancient times and as the “Blue Planet”.

If a large enough percentage of “mankind” elevates in “manas”—“consciousness”—we can enter the “New Golden Age”.

We can become more crystallized than some of us are already becoming and that some have yet to begin the process of being. Let us get it done! As Sri Krishna teaches: “All problems in life arise from some weakness of MIND due to the ignorance of its own essential nature which is universal and the SOURCE of INFINITE ENERGY AND INTELLIGENCE.”

In the Sanskrit language, there is a mantra that is often recommended by “Vaidyas” (Physicians of the healing path of “Ayurveda” which translates as “Science of Life”) for healing depression and anxiety (which is very prevalent in current times, especially due to the pandemic and governmental mandates).

The mantra is “SO-HUM” which translates as “I AM THAT!”. Its message is that we are in and of the Divine and have been created originally in perfection and are meant to be in superb health at all times.

We can return to perfection with anchoring to the LIGHT. In Hebrew, there is the phrase “EHYEH ASHER EHYEH” which translates as “I AM THAT I AM!”

This is what SOURCE said to Moses in the story of the giving of the “Ten Commandments” when Moses asked who was speaking to him.

It is often stated by Kabbalists when they have received a blessing from SOURCE.

All paths have a way of proclaiming the greatness, compassion, mercy, and blessings of SOURCE.

Observe how in Nature different trees, plants, flowers—are all around each other. Look at how different birds fly through the air.

Look at the animals of different types that scamper about in our yards and in forests.

What is the problem with humans that they cannot seem to be together without judgment and criticism and hatred?

Yet, inside we look almost the same and have blood that is the color called “red”.

LIGHT is coming in stronger energetic currents and in faster vibrations.

As the conductor on a train says when the train is ready to leave the station: “All Aboard!”

To use an airflight metaphor: “FLIGHT 2022 is now boarding at Gate January. Please show your up-leveled consciousness tickets.”