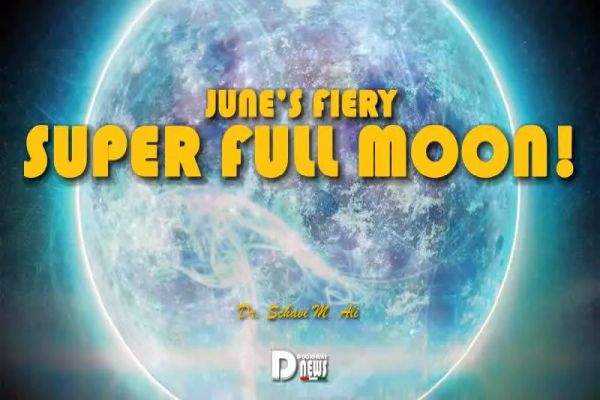 On June 14th, 2022, at approximately 7:52 AM (Eastern Daylight Time), a “Full Super Moon” in the fire element of Sagittarius (Tropical Zodiac) will occur.

A “Super Moon” is when the lunar orb is very close to our planet, and thus, seems larger and brighter.

All Full Moons pull upon our planet’s watery tides and activate tectonic plates.

However, a “Super Full Moon” is even stronger.

Therefore, there can be very powerful earthquakes (above 6.0) and other planetary upheavals (volcanic eruptions, major storms, tornadoes, hurricanes, etc.).

Sagittarius, being governed by the planet Jupiter, symbolizes opportunities for expansion of knowledge, focuses on issues of justice, brings beneficence, makes people desire to travel, stimulates new philosophies, and offers spiritual (rather than merely “religious”) elevation.

With Neptune in Pisces in square position to the Moon in Sagittarius, however, we must be cautious about deluded thinking leading to unwise actions because the Moon governs emotive responses to the past as well to current situations.

Mercury, the planet of communications on all levels, will have gone direct on June 3rd, but its post-shadow period will last until July 6th when it moves into the sign of mothering, nurturing Cancer.

It began its retrograde in its own sign of Gemini, moved back into Taurus for a time, and then moved back up into Gemini where it will have gone direct on June 3rd as just mentioned.

This does not indicate that major projects must still be placed on-hold until the post-shadow is over.

People can indeed begin to move forward on June 3rd, but the post-shadow does suggest that solidification of projects will take some time to come to fruition.

Think of planting a green garden as a metaphor.

We first till the soil, plant seeds, fertilize and water regularly, and eventually, the seeds begin to sprout. However, it takes time for the plants to fully bloom. The same is true if we are planting a food garden.

So, June 3rd is a time to get started on certain projects, but do not think that they will be in “full bloom” by the next day of June 4th!

Because the “Full Super Moon” will arrive in justice-seeking Sagittarius, we can expect to deal with more substantial political and sociological intrigue and chaos as the world populace demands answers to various mandated policies and procedures as knowledge that has been hidden comes to the surface which will be a reverberating vibration of the “Total Lunar Eclipse” which occurred in secretive, transformative Scorpio in May.

Economic challenges may also be one of the many issues to arise due to the “Solar Eclipse” which occurred in April having been in Taurus in opposition to the Scorpio “Lunar Eclipse” which came later—just one of the characteristics of Taurus deals with money.

Therefore, the “Eclipse Season” is not yet over because its blueprints still exist for us to analyze, and accordingly, decide on what actions to take.

The Sun will continue to be in Gemini (Mercury’s sign) until June 21st at about 5:14 AM (Daylight Savings Time) which will bring enlightenment to the many political and sociological issues that will be on the world stage.

During all of the foregoing, other cosmic forces will continue to be strong in their deliveries as LIGHT intensifies daily on our planet that is steadily leveling-up and receiving greater LIGHT and a higher vibrational frequency.

Today, Wednesday, June 1st,as of 11:07 AM (Eastern Daylight Time), the “Power” (“Schumann Resonance”) is already rated at a whopping “67”, but the “Energy of Collective Currents” (all factors considered together such as frequency, amplitude, quality, as well as the energetics of collective consciousness, etc.) is registering a total of “118”!

Solar winds are currently traveling at 449.6 kilometers per second (km/s), and a new sunspot has been detected that is growing rapidly which could result in solar flares of high “C-Class” or “M-Class” levels, and of course, an “X-Class” is not out of the question.

Mankind’s technology can only go so far in reporting to us the energies of SOURCE.

The sunspots are so huge that they are changing the way in which our Sun vibrates.

It is billowing rapidly with fluxes of proton energies (incoming plasma gases with a positive electric charge of atomic particles [as opposed to an electron which has a negative electric charge] that soar along magnetic field lines).

These are all signs of clearings, cleansings, and illuminations that we must acclimate to each time that they are sent.

Therefore, the phrase that is often employed in these teachings—LIGHT AND SOUND TRANSMISSION AND RECEPTION— is ongoing.

Usually, the portal of a New or Full Moon is three days before, the day of, and for three days afterwards, but with the increased daily cosmic energetics, these portals open earlier and close later.

In fact, they overlap with other portals such as an “Eclipse Portal” or a “Planetary Stellium Portal”, etc.

There are numerous types of cosmic portals surrounding and enveloping each other with messages.

These messages are sent into our cellular records and DNA, and we have many trillions of cells in our physical vessels.

One of the easiest ways to relax and “ground” in this powerful cosmic energy is to perform specialized breath work.

Simply take a deep very slow breath allowing the solar plexus and abdomen to push out.

Pause for a few moments before you take each inhalation.

So, the breath is like this: BREATHE IN SLOWLY. BREATHE OUT SLOWLY. PAUSE.

Then again: BREATH IN SLOWLY. BREATHE OUT SLOWLY, PAUSE.

Try to go deeper within to the quietude of your HIGHER SELF/SOUL/SOURCE with each exhalation.

Do not pause between the incoming and outgoing breaths. Just pause when you exhale.

Do this breath technique as many times as needed to become calm and relaxed.

It is very healing physically, mentally, and emotionally and also protects the auric field. Afterwards, recite the affirmation: “I AM BLESSED BY SOURCE LIGHT”.

This breathing ritual is one of the many ancient Pranayama techniques taught by the ancient “Rishis” (“Sages”).

The affirmation, however, was given to me by my HIGHER SELF/SOUL/SOURCE long ago.

The breathing technique, therefore, can be followed by any prayer or mantra that you desire from your path that is especially calming for you.

As we are now just about at the mid-point of 2022, this is an excellent time in which to review the many wellness paradigms that you have attained from various sources and to consider them as being your SOURCE LIGHT APOTHECARY (SLA).

It will be a “spiritual” PHYSICIAN’S DESK REFERENCE (PDR) because our best maintainer and sustainer is SOURCE “ITSELF”, and interestingly, one of the ancient names for SOURCE is “VISHNU”—who is also known as NARAYANA—and this name translates from Sanskrit as “THE SUSTAINER”.

All of the “Devis” and Devas” are the “Shining Ones”—the “Lighted Beings”—forces of cosmic power.

Thus, sacred LIGHT is always available to us.