Learn The Lesson Of Detachment

Learn The Lesson Of Detachment 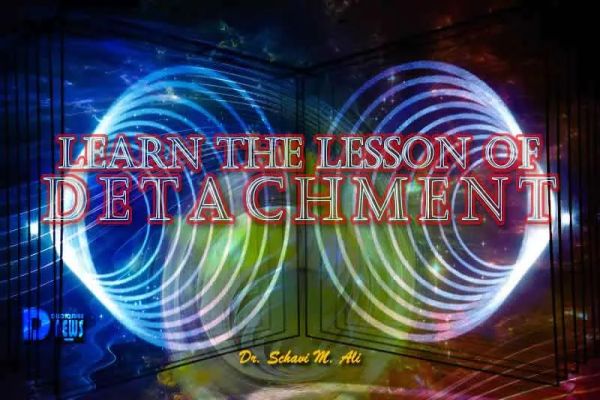 Many people who develop HIGHER KNOWLEDGE—spiritual principles revealed via Avatars or through powerful intuition over the ages to Sages and Prophets—endeavor to guide others who negate or disbelieve such principles based upon their own particular lifestyle desires or lack of knowledge that is being offered to them.

Sometimes it is the case that when people lack knowledge, instead of admitting this, they egotistically criticize the person who is extending information because subconsciously there is a fear that the knowledge that is being given to them is indeed true or there is an envy that someone has knowledge that they do not.

It is almost as if they are saying: “How dare you know more than I do!”

It is best in such cases to cease giving knowledge to such persons to avoid debate.

As long as giving the knowledge was with a sincere desire to help someone, then there must be a letting go when the information is not received with kindness.

People have a right to disbelieve as they choose, but there is no excuse for ill-tempered debate or at the worst–verbal abuse.

Several persons have contacted me regarding how others are finding fault with their HIGHER KNOWLEDGE obtained via prayer and meditation or by diligent study of ancient wisdom which is proving to be of value in this “Now”.

In the BHAGAVAD GITA, Sri Krishna advises the royal Prince Arjuna to be detached from the outcome of the battle which is about to commence between two family factions.

This sacred text is actually about the war between the HIGHER SELF and the lower self which everyone must wage in order to elevate in consciousness.

In another example found in the HOLY BIBLE, we find Yeshua Ha Messiah advising us to: “Shake the dust off your feet and let your peace return to you.”

Whether we are Teachers in various spiritual arenas, Gurus, Acharyas, Vibrational Healers, etc.—any person whose focus is vastly different from the “3d” perspective—there will be those who will negate, debate, and not relate.

This is to be expected in a world filled with manipulating Nature, poisoning the planetary environment, warring with other nations, racial conflict, political treachery, religious indoctrination, and other “bad food’ on the “entree” of the current “3d” civilization.

The action to take is to refuse to partake of “food” (arguments, debates) that you know is “spoiled” and refuse to return to the “restaurant” (the subject).

It may be necessary to permanently release a person or a group, but this may not be practical in a family or a work situation.

We can, however, avoid becoming involved in discourse on subjects that will cause chaos.

This may be challenging when the desire is for others who are loved or whom we must work with to be aligned with our HIGHER KNOWLEDGE.

It is difficult to deal with petty conversations or with those who are steeped in whatever the mainstream news says or with what some ill-informed person of any supposed prestigious rank such as Professor, Doctor, Lawyer, Scientist, Journalist, Corporate Executive, etc. says.

This has been one of humanity’s problems throughout many ages—believing that just because someone holds a prestigious title, then he or she is to be followed without question.

In fact, this is how so much of humanity lined-up to be “vaxxed” without questioning the “vaxxers” and how they are still lining-up to take “booster” after “booster” even when they become unwell afterwards.

They believe the television reports which say that uncomfortable symptoms are because the “vaxx'” is working.

As has been mentioned in a previous article quoting Shakespeare’s character “Puck” in the play “A Midsummer Night’s Dream: “What fools these mortals be!”

Everyone is still learning, even those of us blessed with advanced academic as well as spiritual knowledge and who have earned prestigious titles and awards.

There is nothing wrong with supporting the knowledge that we have obtained as long as it was gleaned with our own further research after having been taught by our Professors who may or who may not have engaged in further research themselves after their university matriculations.

We cannot, however, force others to agree with our knowledge and research.

After all—and here comes that phrase again—FREE WILL—is what we all have been given as a gift.

So, after having tried to offer vital advice, people must be allowed even to poison themselves if they choose to do so.

The pandemic situation has been used as an example here because it is still so much on the forefront of humanity’s “plate”.

There is supposedly now a new variant called “BA.2”.

This is very interesting considering that the letters “BA” make the ancient word for “SOUL” in the language of Medu Neter (“Sacred Speech”) of Kemet.

Metaphysically, this is something to ponder that the average person obviously will not.

“Spiritual Scientists” tend to think deeper than others, and from the depths comes heights of awareness.

However, excitedly sharing with others what has been revealed will often be met with a stop sign.

Let us take another lesson from Yeshua Ha Messiah who attempted to share his great wisdom with the people of “Asrae” (ancient name of “Israel”): “I came to my own, and they received me not!”

There was a small group, however, who appreciated his knowledge and who shared it with others, but beforehand, Yeshua warned them: “I send you out as sheep among wolves!”

Of course, not everyone who disagrees with someone’s advanced knowledge should be accused of being a wolf on the prowl ready to attack.

There are intelligent people who are capable of disagreeing respectfully.

Whether disagreement is done lovingly or with malice, constant attempts to illustrate to others their faulty reasoning is not advisable.

At some point, detachment is best in order to either keep the relationship thriving or to walk away from it in peace.

This is healthier physically, mentally, and emotionally because the nervous system (central, parasympathetic, sympathetic, autonomic) can function better, and certainly our lives can be more enjoyable.

As Sri Krishna taught: ” A healthy nervous system equals a profounder life force, and when the nervous system is pure, BEING reflects more, and the MIND is more powerful” (BHAGAVAD GITA).

If a door opens for us to offer aid to others, even if they have not asked for it directly, we should offer our services.

However, it is not wise to continually pummel people with information when they have given us signs (or exact words) that they do not believe in what we are saying.

The best action is to LET GO AND LET GOD.

As I heard a person once wisely say: “The best sermon is your LIGHT, not your lips.”

Learn to detach when it is advisable, and you will know when to do so because your HIGHER SELF will guide you.

Lightworkers, Lightbringers, Star Seeds—whatever terminology is being employed in this “Now” to describe those of us who are focused on SOURCE LIGHT—nurturing ourselves is very important as cosmic energetics become more potent in the process of transformation of creation, and as our planet receives and gives us further LIGHT from its being given LIGHT from the Sun of our solar system which is being nourished by the Great Central Sun.

This “entree” of” multi-stranded crystallized DNA” seasoned with “SOURCE FREQUENCY” topped-off with a dessert of “Elevated Consciousness” prepared by “Chefs” of “Solar Flares”, “Solar Winds”,” Coronal Mass Ejections” and their “assistants” of “Frequency” and “Amplitude” in the “Cafe of Earth/Gaia” is a “delicious” and “pranic-enhancing” (life force heightening) “sustenance”.

Let us detach from so much “3d'” chaos and confusion and concentrate on our further uplift.

Others will eventually join us at the “table” because SOURCE is not stopping the pouring forth of this “entree” of LIGHT. Increasing numbers of people will soon be “hungry” for TRUTH.

We will be glad that we were “well fed” so that we can have the extra energy to assist those who will have finally awakened.

Solar winds are currently moving at approximately 547.9 km/s (kilometers per second) today, and there is a sunspot building that is estimated to be twice the size of our planet that could soon produce strong “M-Class” solar flares.

The KP Index will rise to either a level of “unsettled” or “storm” as our planet experiences geo-magnetic storming.

The “entree” will never stop being available.

It is like being in a restaurant whose sign says: “All you can eat!” LIGHT is our constant “meal”.

It is “filling us up” with new timelines.