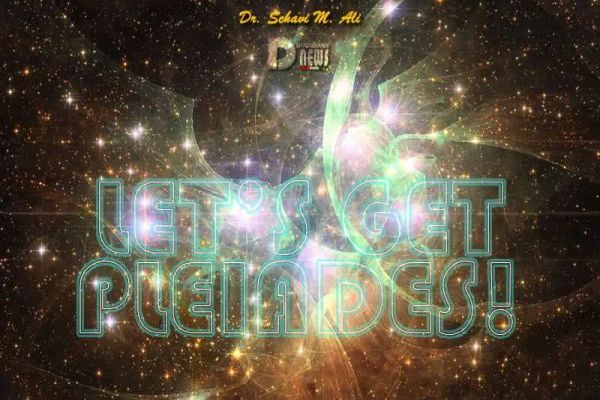 The lyrics “Let’s Get Physical” are from a song by the same name recorded in 1981 by the famous Australian singer, Olivia Newton-John.

I borrow the famous singer’s lyrics as an honoring of the discussion of what is occurring with the Pleiades star system. So, “Let’s Get Pleiades!”

Each year in mid-May, our solar system and our planet Earth/Gaia come very close to the Pleiades star system which is about 444 light years from us but the closest of the star systems to us—a cluster of brightly shining stars, the brightest of which is Alcyone which itself a system of stars in the constellation of Taurus.

Physicists believe that it is approximately 100 million years of age.

Our Sun is in direct alignment with the Pleiades which is also called “The Seven Sisters”.

They look luminous blue when gazed upon through a telescope. The title of the Pleiades system comes from the Greek word “plein” which translates into English as “to sail”.

Many civilizations knew of the Pleiades and referred to them, for instance, as “Krittika”” (to the people of ancient Bharata [India]), “Al-Thurayya” (Arab culture), “Subaru” (Japanese culture), “Mao” (Chinese culture).

There were names for the star cluster for the Maya, Aztec, Sioux, and the Kiowa civilizations.

The energy from the Pleiades “sails” into our planet at this current time of the year bringing vast amounts of HEAT and LIGHT which intensifies the already powerful cosmic forces that are activating our planetary domain.

Solar winds are 578 kilometers per second at the current time, and a new sunspot numbered “AR3014” has a mixed magnetic field which harbors the possibility of very strong solar flares.

According to NASA, there are a total of 8 sunspot groups behind our Sun’s eastern limb (be clear—not “singular” sunspots—but “groups”) on our Sun which is more than in many years.

Particle plasma is dense with pressure all around and within our planetary magnetosphere.

This is, therefore, another day of high intensity LIGHT coming into us.

With the Full Moon portal still active until about Thursday, and with the Eclipse Portal (Solar Eclipse on April 30th and Lunar Eclipse on May 15th and 16th) active for the next six to seven months, as the narrator in the Charles Dickens’ novel, A CHRISTMAS CAROL, states: “We do but turn another page”.

In other words, LIGHT is continuing strong and bright as the DNA in all of our cells receive constant clearings, cleansings, and upgrading.

Reports coming in from around the globe thus far relative to “Light Activation Symptoms” (LAS) are intense heat sensations with sweating as a major experience with these cosmic energetic forces as well as headaches, dizziness, muscle weakness, exhaustion, insomnia, lack of appetite, and anxiety.

There is a constant recuperation required as the LIGHT comes into us from various parts of the cosmos— a continual need to acclimate to the vibrational thrusts.

Whether people work from home or outside of the home, the symptoms seem to be the same.

Some people report having all of the listed symptoms, and some report just having a few.

We all must do as best as we can while our planet, our solar system, and our galaxy is being updated, re-configured, re-energized, and newly “LIGHTED”.

As our Sun “sails” with the Pleiades, so do we because our Sun is receiving its “sailing” orders from the Great Central Sun.

As a reminder, the Mercury Retrograde (direct on June 3rd) and Pluto Retrograde (not direct until October 8th) are adding to why we must really diligently make this month of May one in which to step-back, reflect, relax, and allow ourselves to regenerate.

This entire year is one in which to be very discerning regarding our decisions and actions.

The Summer Solstice in June in the Northern Hemisphere when our Sun rises to its zenith will offer more opportunities to grow in knowledge and spiritual profundity.

Also, more advanced beings are assisting Earth/Gaia and this entire solar system in its greater “EN-LIGHTENMENT”.

So, wear your “grounding” AMBER or BODDHI SEED or SANDALWOOD or TURQUOISE.

Drink lots of water with lemon.

Recite prayers and mantras. Breathe deeply at all times.

You know other actions to take by now (so many suggestions have been offered) to calm any personal “troubled waters” as the world collective consciousness is still involved with “raging seas” of political turmoil. If you live near a lake or pond, spend time meditating there.

When you are there enough times, the ducks swim to you automatically.

Talk to the birds on the ground and as they soar above.

We are all Nature.

Everything in Nature is being adjusted and transformed.

Our thoughts about various situations and the people involved are changing.

Our emotive responses are changing.

Our ways of communicating are changing.

Many are ready to shed the trauma dramas that others tend to seemingly always be involved in and who try to drag others into the fray as well.

LIGHT is sending protection from disharmony to those who are truly elevating and developing.

The reason why people who are trauma drama oriented may periodically show-up in our lives is so that they can be offered some LIGHT.

This is actually one of the mercies of SOURCE.

However, after sufficient time, if certain people remain steeped in disharmony, SOURCE will take over, and there is nothing we can do at that point for others but pray.

We must be comfortable with releasing people and the circumstances that they have attracted.

This may be a hard truth for many to swallow, especially for those who cannot seem to stop helping people who will not help themselves.

Letting go is in itself a lesson.

The heat of the Sun/Pleiades alignment is further removing toxic energy from our DNA as our molecular spin quickens.

Bright whirls of splendor are working upon us.

The “workings” of the cosmos are the artistic creations of SOURCE FREQUENCY. Be grateful for being “worked” upon.

Be grateful for being found worthy of the “workings”.