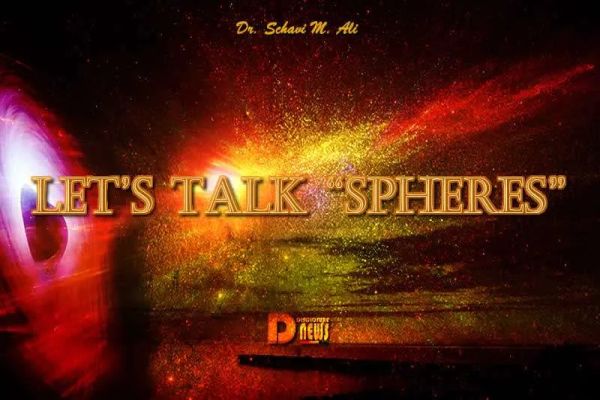 If a visitor came into someone’s beautiful home which was neat, clean, and filled with the sweet fragrance of incense, the visitor might say: “Oh what a lovely atmosphere is in your home!”

The visitor would be referring to the general surrounding “sphere” in the home—the “weather” in the home—its “atmosphere”.

In the same manner, our planet, Earth/Gaia, has a surrounding “Atmosphere” that contains various gases such as having approximately 95 percent nitrogen, 21 percent oxygen, and 1 percent other types of gases.

The “Ionosphere” is comprised of protons (positively charged frequencies) of ionization (radiation), and it sits about 50 to 600 miles above the surface of our planet.

The “Magnetosphere” (our planet’s magnetic field) sits above the “Ionosphere”.

It receives the energetic particles from solar occurrences such as when Earth/Gaia moves through a “Solar Sector Boundary Crossing” (when fast and slow-moving solar winds converge and send shock waves to the planet that affects its inner and outer fields), or when “Coronal Mass Ejections” (explosions from the Sun of ionized plasma particles) occur, or when the chemicals in the tails of huge comets soar through the cosmos, etc.

Filled with these kinds of energetics, the “Magnetosphere” pulsates and pushes the energetics into our planet, and subsequently, both Earth/Gaia and “Her” inhabitants are affected with the often-discussed “Light Activation Symptoms” to varying degrees.

Some people feel more energized when heightened cosmic energetics are occurring, and some feel depleted of energy.

Everyone is “wired” differently, and thus, not everyone will experience the same symptoms at the same levels.

Yet, everyone experiences “something” whether they relate it to the cosmos or not.

Even those of a lowered consciousness are being given opportunities to elevate if they choose to do so, but the LIGHT coming into them is hampered by the blockages in their thoughts, feelings, words, and actions.

Those who have chosen to elevate are being re-calibrated and upgraded in an on-going fashion, and their DNA and cellular records are being wonderfully cleared for transformation and reception of increasing amounts of LIGHT.

“Solar Flares”, in their varying levels of “A”, “B”, “C”, “M”, and “X-Class” (with numerical values attached to them usually from “1” to “10”) explode from the Sun often without “Coronal Mass Ejections” (CMES) having also occurred, and they are not always Earth/Gaia-directed.

They sometimes occur on the far side of the Sun.

However, the flares which directly shoot into our planet—with their photons, electrons, carbon dioxide, and other cosmic substances—can affect technological devices as well as humans and animals, but they do not actually cause “Geomagnetic Storms” which are rated from “G1” to “G5”.

It is the “Coronal Mass Ejections” which cause “Geomagnetic Storms” that, as earlier mentioned, affect our planet’s inner and outer fields by tossing and turning tectonic plates and giving heightened vibrations to the crystals and gemstones stored within our planet (some of which came to Earth/Gaia millions and even billions of years ago from meteorites; one example being “Labradorite” found primarily in Canada).

They can create unusual heat or unusually cold temperatures in the Northern or Southern Hemispheres even when these places above and below the Equator are used to certain kinds of predictable weather at particular times of the year.

All of this is what is defined as a “Geomagnetic Storm Event”.

When flares and CMEs happen together, our planet receives more powerful “doses” of vibrational frequencies, and symptoms are often increased in humanity and animals, and technology such as computers, cell phones, and other equipment does not work properly.

Thus, flares and CMEs together are a powerful symphonic crescendo!

In recent years, flares and CMEs have been sounding their “tunes” together and have activated the “Ionosphere”, “Magnetosphere”, and “Atmosphere”, and these are not the only “spheres” of our planet. There is also the “Stratosphere” and others. Think of these “spheres” as our planet’s “Auric Fields”—each of which receives its ultimate “orchestral directions” from the Great Central Sun.

The “Magnetosphere” is emotionally charged, and as humans, our emotions are also magnetic and can be stirred-up by our electrified thoughts, and then material experiences are the result.

When Earth/Gaia’s “emotions” are stirred-up specifically by incoming CMEs, “She” then has “material” experiences which manifest as the quakes and other conditions already mentioned.

However, it is all a “Divinely-Conducted” orchestral process that is causing “The Shift of the Ages”.

It is so very vital that we learn to combine basic scientific knowledge with sacred understanding as cultures long ago were able to do when they received SOURCE REVELATIONS. Over many, many eras in the space/time continuum, people of Earth/Gaia have gradually separated Divinity from scientific study.

Thankfully, there are some university-educated scientists who are now respectful of ancient teachings because they realize that the ancient “concertos” are being “played” in the so-called modern “Now”.

The Great Central Sun is “tuning-up” the Sun, and the Sun is preparing our planet and us for an astounding “performance” as we join other galaxies and their planets in the “concerts” that they have been “playing” for times which cannot be calculated.

Instead of focusing so much on “3d” political strife, economic crises, warfare, medical manipulations of toxic chemicals (some of which are experiments with bio-weaponry), sexual perversions, sociological discord, and other densities, let us look around at our general “Atmosphere” and look up at the heavens and pronounce the ultimate mantra—the “Pranava” (“Cosmic Sound”) as all creation was “birthed” into being during SOURCE TIME which cannot be calculated—“AUM” “AUM” “AUM”!

We have 1066 guests and no members online