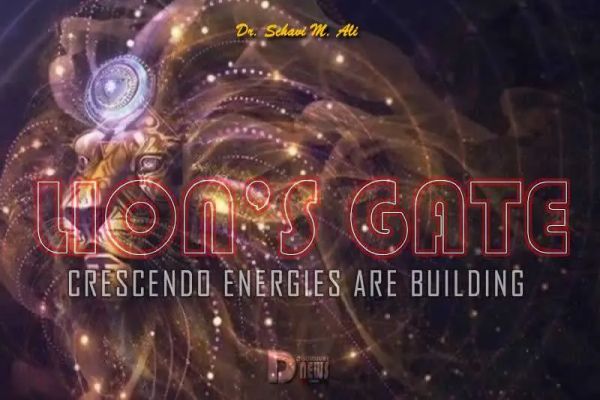 As this weekend heralds the peak of the “Lion’s Gate Portal” on Monday, August 8th, 2022, “Light Activation Experiences” are escalating.

Earth/Gaia’s “Power” (“Schumann Resonance”) is registered at “85” which indicates that it could be higher since mankind’s devices can now only give us a good general idea of our planet’s vibrational frequency and amplitude.

Magnetosphere charts show that particle plasma is building in pressure— especially towards the Sun-facing side of our planet.

However, the HIGHER SELF is now the true “spiritual device” which tells us the planetary activations as they are thrust into us by the Great Central Sun as well as “Sirius” at this time/space continuum.

Along with our planet, we now “ground” to our Sun and to the Great Central Sun as we hold on to our “surfboards” and ride the “LIGHT WAVES”.

We connect to SOURCE FREQUENCY via prayer, meditation, and other rituals according to our paths, and we also employ material accoutrements such as prayer malas, sacred oils, tuning forks, Tibetan singing bowls, etc. “Sepdet” (“Sirius”) which is the brightest star in the night sky, is beaming its blue-white radiance to us from approximately “8.6” light years in distance.

It is a part of the constellation “Canis Major” which is Latin for “The Greater Dog”—thus, its other title as “The Dog Star”.

It rises in closer and closer conjunction with our Sun during the “Lion’s Gate Portal” from about July 25th (“The Day Out of Time” and Tybi”) to about August 12th.

This is “Sirius A” because there is a “Sirius B”—considered a white dwarf star, and such stars become increasingly dim until they eventually go dark.

In 2005 astronomers collected research data that measured the mass of “Sirius B” for the first time in modern history.

They found that it has a mass of 98 percent of our Sun.

The ancients of Kemet honored “Sirius A” (as already stated it was originally referred to as “Sepdet”) as their original cosmic home from which they brought many amazing capabilities to what they referred to as “Geb” which we know as “Earth” or as “Earth/Gaia.

Nurture the ancient DNA within you this weekend as new collective cellular records are coming “on-line”.