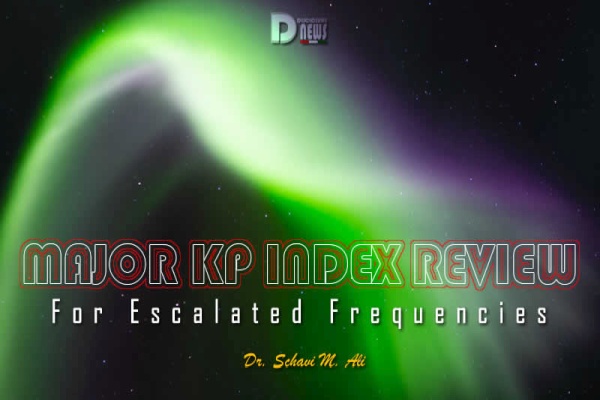 The KP INDEX registers activations to Earth/Gaia’s inner core and outer field (its geomagnetics) due to powerful solar energetics such as flares, winds, and coronal mass ejections (also known as “cosmic rays” and “plasma waves”)— all of which are sent via the pulsations from the “Great Central Sun”.

The letters “KP” are from the German term “kenniziffer” which translates as “characteristic digit”.

The term was introduced in 1938 by Dr. Julius Bartels.

The “KP” levels are monitored daily in three-hour segments by various institutes who check their information through the observatory in Oulu, Finland which is considered as being the primary observatory for such studies.

On Tuesday, October 12th, the “KP” is registered as being “storm”. 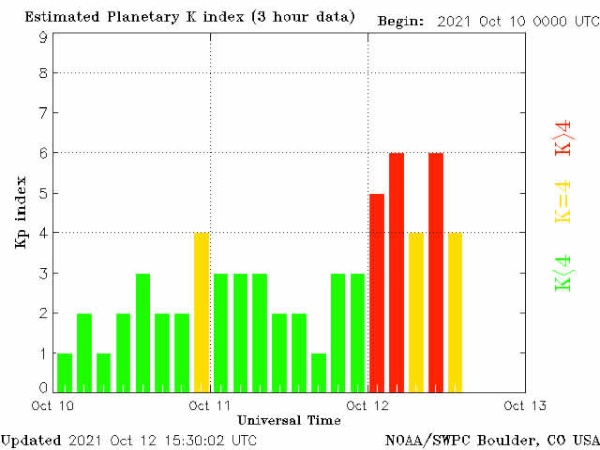 Solar winds are traveling at almost 500 kp/s (kilometers per second), and a coronal mass ejection has occurred as of the late evening of Monday, October 11th (which was already the 12th in some areas of the world).

Earth/Gaia is still enduring these high cosmic energetics as “Her” tectonic plates are shifting.

“Hurricane Pamela” is soaring through parts of the southern United States, and there have been strong earthquakes of 5.9 and 6.2 in the states of Hawaii and Alaska as of yesterday and one over 6.0 in the island of Japan earlier.

Colorful auroras are billowing in the skies in several nations.

Auroras are caused by electron particles from the Sun of our galaxy joining with atoms in Earth/Gaia’s upper atmosphere.

As this process occurs, photons (particles of LIGHT) are released.

Auroras are evidence of a coronal mass ejection having occurred.

The cosmic intensifications being discussed herein have arrived after the planets Saturn and Pluto have moved direct from their retrogrades.

Saturn was retrograde from May 23rd of this year (2021) until yesterday, October 11th.

Pluto was retrograde from April 27th of this year until just a few days ago on October 6th.

Thus, while Mars and Jupiter “dance” in merriment until Mars moves into Scorpio on October 31st when it will then square Jupiter, Mars and Pluto are currently doing a rather intense “tango”.

Stress must be avoided which is already quite extreme in the experiences of the human collective physically, mentally, and emotionally.

When stress is almost overwhelming, many people are too anxious to apply the spiritual and natural techniques that they have learned.

They just want relief from the tension!!!

However, humanity must be determined to remain calm in the midst of worldly chaos because then the message receptors in the brain will function properly to allow vital information to easily flow so that knowledge can be acquired and correct decisions can be made.

One of the easiest ways in which to calm down the nervous system is by breathing properly via use of the “Yogic Breath”.

To avoid a sensory overload or to calm down an already charged-up nervous system (which can eventuate into unduly elevated blood pressure levels and tachycardia), do the following: Place the right thumb down over the right nostril. Breathe-in through the left nostril, and hold the breath briefly—just a few seconds.

Then place the ring finger of the right hand over the left nostril, and breathe-out through the right nostril.

Read these instructions as many times as necessary in order to understand the procedure.

Perform the technique several times while reading the information.

Eventually, the process will be memorized and then reading and doing at the same time will not be necessary.

The “Yogic Breath” can be done at any time, even while driving in heavy loud traffic.

Yogic breathing is actually the natural way of breathing, but as people mature and experience the general chaos and confusion of “3d” world events, they tend to breathe in a very shallow manner which does not send proper oxygen to the cells.

Concrete and steel are not the way to truly thrive, but so-called “modern” humanity cannot imagine not having tall skyscrapers with glass and steel as architectural art forms.

Areas like lovely parks or Nature reserves are only “side dishes” with urban concrete and steel as the “main entree”.

No wonder little animals like squirrels scamper back and forth as they attempt to navigate cars, trucks, and buses on the busy urban streets of mankind.

No wonder there are discussions on “solar power” because it now has to be especially harnessed.

There is much for humanity to contemplate as it moves along with its planetary home which is being taken higher and higher and spinning increasingly faster re-setting time lines and vibrational frequencies, experiencing strange weather patterns and shifting magnetic energy currents.

This is the era of the WAVE FACTOR, with the word “Wave” in this case refers to the transference of energy currents back and forth and up and down from human atomic frequencies of thought, word, and deed to ethereal atomic atomic frequencies, and the mixture creates a confusing “soup” of various types of worldly drama.

Then, as per usual, SOURCE provides the ” cosmic cleaning crew” in the form of cosmic events.

The KP INDEX has been personified by some with the name “Kip” who is now wide awake and ready for action.

“Kip” has “awakened” on the heels of planetary “nudges” as the “cosmic alarm clock” blares.

Collective consciousness is busy with nervous energy on one hand and blissful peace on the other.

Some, however, are performing peaceful ancestral techniques from the space/time continuum from which aspects of SOURCE are sending instructions on how to maintain wellness as time line shifting occurs.

The dense fog will lift.

The LIGHTHOUSE is in the distance—not too far ahead.

“Kip” is yawning and stretching.

It has rubbed its eyes.

Time to go to work.

It may work overtime in the next several months.

Keep the LIGHT on.

We have 1230 guests and no members online