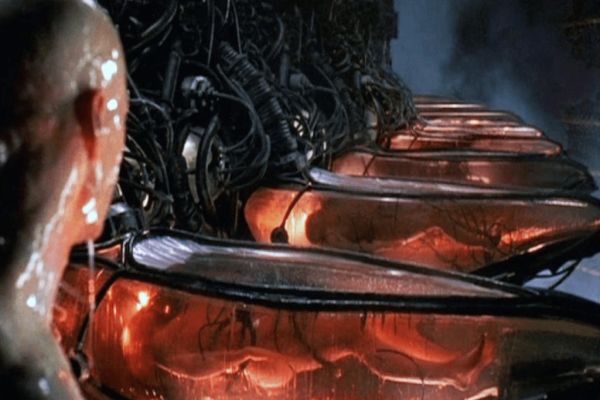 All the frustrations, despair, existential panic, boredom, restlessness, paranoia, loss of identity, feelings of unreality, feelings that we are trapped, that someone is blocking us in our lives, that they are plotting against us and deceiving us, the feelings of utter uselessness and insignificance that accompany individuals in the 21st century begin to make sense if we look at them in the context of the matrix film's message.

The Matrix is a collective dream, the ultimate mythical story. It is a story about the very essence of humanity. The Matrix is the path on which the soul through suffering comes to itself and enlightenment occurs.

Countless viewers are convinced that the film hides secrets that can only be deciphered by those who have eyes to see. There are secrets about gaining strength, enlightenment and liberation. The Matrix is simply more than just a movie.

The mechanical environment of the postmodern consumer society created by ordinary people is a reality that is in fact a trap to isolate its inhabitants from a truer, broader and richer interpretation in which everything is related and cooperates. The Matrix is the environment in which we live and which we maintain with each of our thoughts, even though many of them are not even our own. It is a world created through fear and rationality, a prison permeated with hardship, hostility, confusion, resentment and despair. It's not a playground. And if it's a game, then few people enjoy it, quite possibly because no one told us the rules when we arrived.

Biorobots, or humatons, are sleeping people living fully in the matrix. When you imagine a movie, they are a bush in the background that illustrates the overall picture. This is what the world looks like and its rules according to the connected sleepers:

Mainly to be inconspicuous.

Your goals must be the usual goals that the people around you have. Your opinions are not yours in principle, but you have taken them from somewhere so that you do not confuse other people and fit into the collective. For this reason, you prefer not to even say what you really think. You often don't even think what you say. Honesty is socially inappropriate and often dangerous. If you want to have good relationships with your surroundings, keep a stable, unchanging expression.

You are what you own.

Connected people are collectors. They think that the more they accumulate, the more they will be appreciated by those around them. Especially if the items are unnecessary. According to the biorobot, the more supplements he has, the more complex his personality is. Black shiny objects like cell phones and glasses are cool. However, the aim is not to overlay the personality, but, on the contrary, to replace the missing personality with a superficial façade. If you have a shiny BMW with lots of accessories, who cares if it eats too much?

What matters most is what others think of you.

The main motivation of biorobots is to be popular. The more people like them, the more important they are to themselves. And because connected people don't like what they don't understand, you need to be direct, simple, predictable, and avoid original and unusual ideas. Connections mainly take care of themselves, so you must not interfere too much with another person's space. Avoid eye contact during conversations, ask personal questions rarely, and don't have to listen to anyone. The connected person does not listen, rather waits for a break in the conversation so that he can squeeze into it. Therefore, it is not desirable to pay too much attention to the feelings of others, because this could make them insecure.

Because humatons need to be liked, they try to suppress their emotions and be as gentle, considerate and polite as possible. Anything that might offend others is avoided because connected people are very easily offended because they are terribly hypersensitive. In fact, they don't care about anything other than their own feelings. Even anger must be suppressed so that the other person does not notice that he has offended you. He will perceive that something is wrong, but he will not know why. You leave him in uncertainty and doubt and keep your gentle face. Connected people rarely allow themselves to experience real strong emotions such as anger and sadness, preferring instead surrogate emotions such as disgust, upset, remorse, arrogance, self-pity, contempt, and slightly veiled hostility, which are signs of true character in a matrix society.

Compare yourself to others.

Everyone is unique, special and therefore more important than the others. The goal of the biorobot is to elevate itself at every opportunity. The more he can humiliate others and make them feel inferior, the more superior he will feel. In the arena of the matrix, individual egos meet and compete with each other. And whoever can humiliate the adversary gains power over him. Competitive biorobots base their self-esteem on profit, success and honor. All power means control and control of others. The more power a biorobot can steal from others, the more power it has. Conversely, the more power others have over you, the less power you have over them. Egos define themselves by comparing themselves to others through external factors and not through a sense of self-worth. The ego competes with the other egos, only one wins, and the winner takes all. That is why connected people stand against each other in the fight of who with whom not within the survival of the physical body, but especially within their ego. Most often, therefore, they feel an innate and carefully concealed hostility towards others.

The highest goal of personal aspirations in The Matrix is fame

Connected people have three goals: success, fame, and fortune. All three have a common theme. If they achieve them, they will gain power over others. When you get a lot of people to worship you, you steal a certain amount of power from them. Glory is the ultimate goal of the attached, even if only a handful reach it, because it is a prerequisite for achieving the other two goals. Fame will give wealth and success, and in doing so, it will bring the connected to a higher level of true power. When the world envies us, we can be sure of our superiority while secretly despising them in our souls. Our ego is then superior, it is a god in its own world. But most connected people can only enjoy this goal through other people and by worshipping them. Few people reach this peak.

The connection must worship someone and humiliate someone.

So that envy of a privileged individual does not spoil their joy at the same time of admiring him, it is necessary to maintain in them the illusion that one day they will also reach such a height. It is in the nature of connected people to worship what they both curse and to curse what they worship. At the heart of all their activity is a sense of self-contempt and insignificance. Connected people look up to those they feel inferior to, and this worship gives them pleasure. At the same time, they look with contempt upon those they perceive as inferior, and this humiliation also satisfies them. At the same time, they declare to everyone that all people are equal.

to be continued next time