Navigating On The Sea Of Light

Navigating On The Sea Of Light 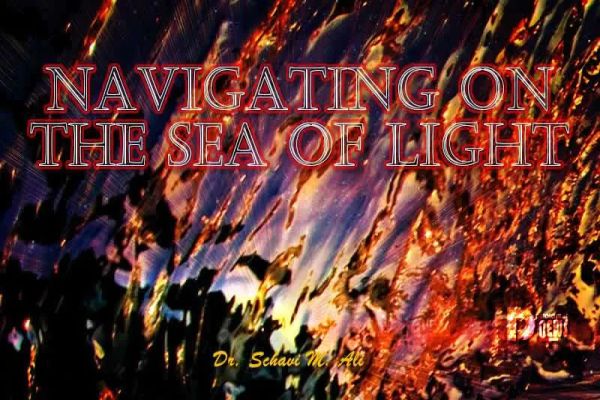 To “navigate” something does not entail that it be controlled.

Rather, when we navigate something, we work with it.

This is how we must think of the energetics of LIGHT that are streaming into our solar system seemingly more intensified with each day.

This morning, Wednesday, May 5th, 2022, at 8:59 Universal Time (UT) which was 3:59 AM Eastern Daylight Time (EDT), a powerful “M.5-Class” solar flare exploded from the Sun, and sunspots are indicative of more “M-Class” and possibly “X-Class” flares to follow.

Solar winds are currently “high normal” traveling at 352.5 kilometers per second (km/s)—just a reminder— “normal” wind speeds are between 300 and 400 km/s.

With solar winds traveling at higher levels than known to be “normal” for so many years now, “normal” may need to be changed to 400 to 500 km/s in this “Now” era of heightened cosmic events.

We can no longer analyze what occurs in the cosmos from a textbook perspective unless textbooks become more spiritually-oriented so that they discuss not just the decades-old astro-physical phenomena, but they should reflect what is beyond typical human knowledge and be open to the realization that a HIGHER INTELLIGENCE— which is the SOURCE of all creation—known and unknown to humankind— is allowed to enter the classroom discourse.

This would require adding the sacred texts of various ancient civilizations onto the course syllabus—those cultures which taught about planetary, galactic, universal, and cosmic phenomena as a regular part of their ancient temple curricula.

Much of what is known today in what we label as “traditional science”—although helpful in understanding cosmic happenings—is only the proverbial “drop in the bucket” compared to what was Divinely revealed to the ancient “Rishis” (“Sages”).

Many members of the group known as “modern mankind” or “modern humanity” sometimes feel strange when spiritual discussion is added into intellectual pedagogy.

Thus, the “mind”—which is “consciousness”—are looked upon as separate dynamics.

The word “man” is from the Sanskrit term “manas” which is translated as “mind”.

Therefore, if ancient languages were also added to advanced classroom discourse, then intellectuality and spirituality would be joined.

However, the “Parent Languages”—the phonemic roots— of all of this stretch far back into the annals of space/time.

Like a delicious stew, there has been an adding on, a mixture of, a stirring together of language forms.

A brief example can be gleaned by the “Hindi” that is spoken by many people today whose roots are in the ancient Vedic culture.

The language of “Hindi” is a mixture of ancient Sanskrit phonemes and European language phonemes.

True Sanskrit is rarely spoken or written, except during temple ceremonies.

The oldest Vedic scriptures, however, are in Sanskrit.

Another example can be seen in Hebrew which has numerous ancient Kemetic phonemes within it from the “Medu Language” (“Sacred Speech”) which the original Habiru learned to speak when they came into Kemet from a land called “Libu” in northeastern Alkebu-lan many thousands of years ago because they were experiencing a famine and asked for land on which to raise their families and cattle.

They were thus given land in “Mem” (which became one of the Hebrew words for “water”) which is now modern-day “Cairo” from the Arabic tongue.

Dr. Fabre D’Olivet, Linguist, did perhaps the most extensive research on proving that Hebrew is filled with what are original Medu Neter phonemic structures.

His work is entitled THE HEBRAIC TONGUE RESTORED.

Historically speaking, here is another issue which must be cleared away: the ancient Habiru were not slaves of the Kemetu.

They were enslaved by the Roman Empire.

As I have stated in previous documents, “The Ten Commandments” is an excellent movie in terms of artistic special effects, but it lacks historical truth.

Is there not a wise saying which states “The Truth Shall Set You Free”?

In transforming creation from carbon to crystalline, SOURCE LIGHT is bringing up truths which have been hidden for centuries—for ages—up to be revealed and reckoned with, and the revelations may cause uncomfortable thoughts and feelings to many.

Is not the “labor” of “re-birth” uncomfortable in some ways?

We are required to let go of what may be egotistical notions.

No longer will certain groups—cultural, racial, or religious— be able to think that they are superior to other groups.

There will be, however, a realization that those groups who have been made to have a poor self-image will realize the greatness of their ancestry, and thus of the DNA within them, and at the same time, those groups which have participated in the oppression and suppression of others will see that what they “think” they have developed in many ways has been done from a “tree” on which they sit only on a branch—they are not the rich roots of civilization’s tree that they were taught that they were.

A major blueprint for truth is arriving with the “Total Lunar Eclipse” in Tropical Scorpio on May 15th and 16th (allowing for time zone differences).

Scorpio digs down deeply into the trenches to bring forth what was hidden—either purposefully or by accident.

It causes humanity to face its errors of thought, word, and deed.

It swims into the dark deep waters to bring up amazing knowledge.

Be prepared for local, national, and global surprises to be revealed in the arenas of politics, social structures, medicine, so-called “traditional science”, religion, and more.

Mercury will already be in retrograde as of May 10th, and this will add to the reflections on the past.

Anyone who has not done so already should prepare before Mercury Retrograde of May 10th with all of the necessary “tools” needed for establishing a soothing home atmosphere (candles, incense, essential oils, herbs,prayer beads, notebooks, pen, sacred texts,etc.).

Do whatever major house cleaning that needs to be done.

Do not let the laundry pile-up.

In other words, make your home an ashram, a temple, a sanctuary of PEACE and LOVE.

Cease any attempts at controlling people and situations.

Just pray and meditate for what your specific understandings need to be.

Navigate the SEA OF LIGHT.

Try to search their hearts.

This is the altar of the body temple.

There is an ancient proverb which says: “I AM BECAUSE WE ARE.”.

Consider this as our planet Earth/Gaia continues its reception of LIGHT.