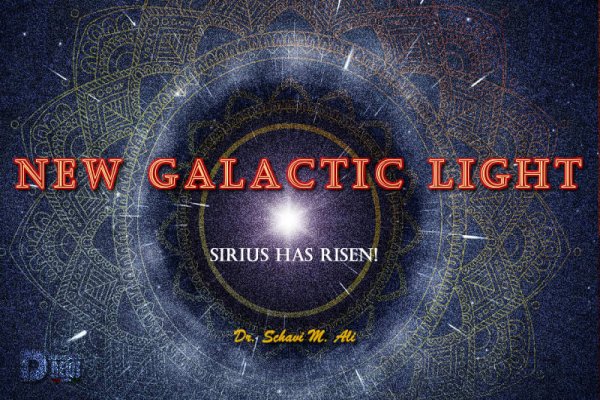 Sirius (anciently known as “Sepdet”) has risen! It is aligned with the Sun of our galaxy heralding a New Galactic Year!

Increased LIGHT frequencies are occurring and will continue to do so throughout this entire year, and opportunities will be offered more for an upsurge in the understanding and application of spiritual principles.

Cleansings will continue in the aspects just mentioned, and acclimations to the new LIGHT will also occur.

We must realize that many, many ages or eons in the space/time continuum are being thrust out of our cellular records, and new records are being formulated.

This is transformation to LIGHT at its most glorious as SOURCE sends “ITS” energies of advanced “Prana” (“Life Force”) throughout the entire cosmos. Earth/Gaia’s tectonic plates and crystals are being activated with strength and vitality, and planetary cellular records are also being transformed after eons of hatred, greed, warfare, famine, oppression, and all other manner of disharmonious “notes” have been played upon “Her”.

There are, of course, more “tunes” to learn and more “lyrics” to be written as the “Divine Symphony” constantly plays and as more of Earth/Gaia’s inhabitants join the “orchestra”.

The “Professors of Cosmic Musicology” such as solar flares, solar winds, heliospheric current sheets, super novas, comets, asteroids—all continue to blast their “instruments” of photonic energy. The “acoustics” in the “Cosmic Auditorium” are clearly perceptible.

When we think and feel with harmony, the electrical and magnetic currents of these actions move through LIGHT and SOUND frequencies to establish harmonious physical circumstances. In fact, this is how sacred ancient mantras work.

When we think them silently or recite them aloud with sincerity, a powerful energy is created that electrifies the atmosphere and magnetizes our needs and desires to us.

We are actually “walking concerts” of LIGHT and SOUND when we are elevated to the necessary heights that anchor us to SOURCE which has many sacred names and forms but which is far above them all!

As has been discussed previously, the Sanskrit term “mantra” translates as “mind tool”. It is a term derived from the Sanskrit word “manas” which is “consciousness”. Also, when the numerous holy texts of the world’s religions speaks of “man”, it is actually speaking of “manas” or “consciousness”.

Thus, the biblical verse which says “Let us make man in our image”, is saying “Let us make consciousness in our image”, and the collective plural pronoun “us” is a reference to the many aspects of the one SOURCE (who, as already mentioned above, has many holy names and forms).

Therefore, the term “man” is a reference to both the feminine and the masculine human being—to consciousness, not to gender. Even though throughout many ages “man-kind” has taken a ruling power over “woman-kind”, the DIVINE MOTHER energy was first revealed to ancient “Rishis” (“Sages” who were both women and men).

Just five of the oldest names for “Our Mother” are: MUT-EM-UA (“Water of the Virgin Mother”) who has birthed all of creation from “Her” vast, watery cosmic womb, MARI EN (“Great One”), ASET (“Throne”—who was called “Isis” in Greek), SHEKINAH (“Divine Presence”–a reference to “Her” LIGHT), and SHAKTI (“Power”). “She” is “Self-Created” and “Self-Creating”.

It is “She” who birthed BRAHMA (the “Expander”), VISHNU (the “Sustainer” who is also known as “Narayana”), and SHIVA (the “Transformer”). “She” pronounced “AUM”, and “Her” Divine Womb opened. “She” provides for us, nourishes us, teaches us, heals us, prospers us, protects us.

“She’” is all of the “Devas” and “Devis”—the “Shining Ones”. This is TRUTH from the annals of the profoundly ancient space/time continuum. As a scriptural verse advises: “Study to show thyself approved” (HOLY BIBLE).

Our DIVINE MOTHER can be gentle and she can also be aggressive when necessary.

One of her protective aspects is DURGA (the “Invincible”) who is depicted riding on a tiger or a lion and holding weapons in her many hands with which “She” destroys evil and protects the righteous.

“She” is also LAKSHMI (the Goal of Spiritual and Material Abundance”) arrayed in beautiful red or pink silk sitting on a lotus blossom and handing out golden coins .

“She” is SARASVATI (“She Who Flows”) who blesses us with art, language, music, and intellectual knowledge.

“She” is all of the “Avatars” (a word which means “Those who Descend”–a reference to SOURCE coming into any planetary realm in specific form where removal of disharmony and protection of the righteous is needed). Krishna and Rama are examples of Avatars.

“She” is thousands more and is yet uncalculatable in “Her” many forms.

The history of how the DIVINE FEMININE was banished to the “back of the classroom” is being realized by increasing numbers of people, and many of our men are to be loved and appreciated for their realization that without the DIVINE FEMININE, the DIVINE MASCULINE would not exist.

SOURCE is cleansing what is newly birthed and presenting us to ourselves as lineages of LIGHT and we are “baptized/consecrated/confirmed”.

Our “sisters” and “brothers” are throughout the galaxy.

Here is an important metaphysical message: Is it not interesting that in Pythagorean Numerological Science the word “LIGHT” vibrates to the Master Number “11” (High Priestess or Priest, the Psychic, the Master Teacher) and that the ancient Kemetic word for LIGHT is RA which vibrates to the number “1” (Leadership, New Starts)?

A triangle has three sides. The interlaced triangles which form the “Kem Seb” (“Potent Star”) which was called the “Star of David” in later ages, has this meaning: The triangle with the upward apex is the “Triangle on the Material Plane” because the base sits on the ground.

The Triangle with the downward apex is the “Triangle on the Heavenly Plane” because the base sits in the heavens. This also represents the star “Sirius”—our brightest star. Envision this symbol at your third eye.

It will help to further anchor you to the LIGHT and will assist in the de-calcification of your pineal gland.

All of this was taught in ancient temples and this knowledge is being resurrected.

We are in a “Now” where we must think beyond logical analysis. We must think more in terms of spiritual alchemy.

We are always “breathing” the sacred breath of SOURCE, and SOURCE is breathing into us. Breathe deeply, and take-in greater LIGHT.

We are being given Divine Codes on a regular basis. Every heightened level of awareness builds new codes—LIGHT CODES—HOLY NUTRITION!

We have 1369 guests and no members online