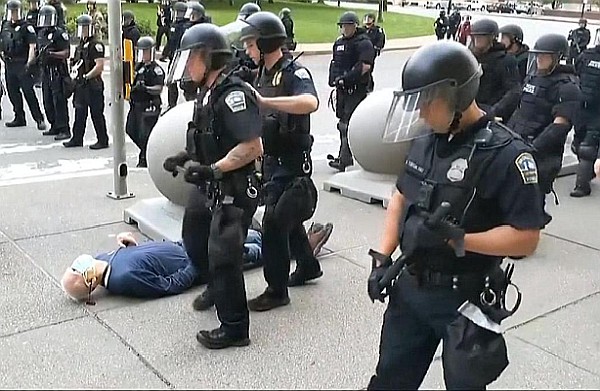 Social media has been flooded with an endless stream of footage of police brutality as Black Lives Matter protests continue throughout the United States. As of this writing everyone’s talking about a 75 year-old man who was knocked unconscious after being forcefully shoved for getting in a police officer’s way at a protest in Buffalo, New York, but it will soon be replaced by other headline-grabbing videos of physical assault by police officers.

Wherever these videos emerge online you will inevitably see a deluge of cop apologia (which I decided just now I’ll be calling copologia) saying the footage is fake or the victim deserved it and the cop’s just trying to get home to his family blah blah blah. There is not enough gold in the earth’s crust to make the number of olympic medals these people deserve for all the mental gymnastics they are performing to excuse unprovoked, completely unnecessary acts of violence from public employees whose job isn’t even statistically all that dangerous.

Most of these copologists do not even know why they are falling all over themselves to try and justify police brutality. It’s a conditioned response, like turning your head when someone calls your name. They don’t think about it, it’s just something they’ve been conditioned to do by decades of media and cultural indoctrination into an empire whose survival depends on the existence of a violent and militarized police force. They hear Pavlov’s bell and start salivating, just as they’ve been programmed to.

The thing is, their creative energy is being spent entirely in vain. Police and their apologists have already lost the argument.

A police force which cannot respond to protests about police brutality without the internet being flooded with a steady stream of police brutality footage is a police force in sore need of drastic overhaul. It has already been proven that that is in fact the case. There’s no taking it back. There’s no fixing it. It’s done. The debate is officially over. Huge, sweeping changes must immediately be made, and there’s no valid reason for the protests to stop until that has occurred.

Cops in #Indianapolis grope a woman’s breasts while arresting her and then violently beat her when she resists.

These videos have made it clear that the institution of policing in America is completely sick from coast to coast, right down to its very culture. The most obvious example I can point to is that watching just a few minutes of the footage of police brutality at these protests makes it undeniably apparent that a belief pervades police culture that it is okay to physically assault someone who has made you feel emotionally upset. Over and over and over again we see police accosting civilians for saying impolite words to them or making rude gestures, or not demonstrating an adequate level of subservience. Over and over and over again we see an attack on a cop’s ego treated as an attack on the cop himself.

This is absolutely ridiculous. These are public servants. Imagine if teachers, mail carriers or DMV employees were routinely assaulting anyone who spoke impolitely to them.

Police should definitely be made to feel ashamed of having this attitude. They should be mocked and laughed at for it widely and consistently. It’s not okay to assault someone who hurt your feewings, you fucking infant. You’re a taxpayer-funded employee. You get to retire after 25 years. Get the absolute fuck over yourself, dipshit.

The fact that words pose no actual threat to you is something people are supposed to learn as children. There are nursery rhymes for it. The fact that public servants feel entitled to respect and deference from complete strangers should have been trained out of them from day one and been a strict taboo throughout the entire culture.

But it wasn’t. Because the entire institution is mentally ill. There is no saving this limb. Amputation is the only option.

Many have correctly pointed out that most of the jobs done by police today could be done much better by social workers, and that most of the remaining jobs are completely unnecessary and could be dispensed with entirely. On the rare occasion that a squad of meatheads with batons is necessary they can always be called in like a SWAT team. Ending the drug war, eliminating unhelpful laws and replacing the armed goon patrol with social workers would purge America of this gangrenous limb and begin a movement toward health.

Whatever changes are made, they need to be swift, and they need to be massive. Anything less is completely unacceptable. This has been resolved beyond any possible dispute.

Caitlin Johnstone - Rogue journalist. Bogan socialist. Anarcho-psychonaut. Guerilla poet. Utopia prepper. Proudly 100 percent reader-funded through Patreon and Paypal. Much work done with assistance from soulmate/brother-in-arms/co-conspirator Tim Foley. Thanks for reading! The best way to get around the internet censors and make sure you see the stuff I publish is to subscribe to the mailing list for my website, which will get you an email notification for everything I publish. My work is entirely reader-supported, so if you enjoyed this piece please consider sharing it around, liking me on Facebook, following my antics onTwitter, checking out my podcast on either Youtube, soundcloud, Apple podcasts or Spotify, following me on Steemit, throwing some money into my tip jar on Patreon or Paypal, purchasing some of my sweet merchandise, buying my books Rogue Nation: Psychonautical Adventures With Caitlin Johnstone and Woke: A Field Guide for Utopia Preppers. For more info on who I am, where I stand, and what I’m trying to do with this platform, click here. Everyone, racist platforms excluded, has my permission to republish, use or translate any part of this work (or anything else I’ve written) in any way they like free of charge.
Source Here

We have 4589 guests and no members online