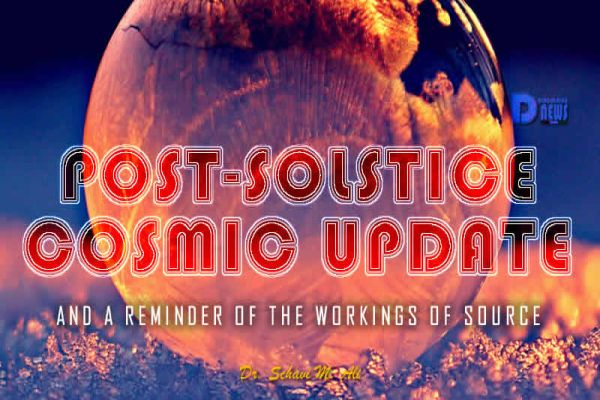 In the early morning hours of Wednesday, December 22nd, 2021, there has been an “M.1-Class” solar flare and two “C-Class” solar flares (C.8 and C.3), and solar winds are traveling at well over 500 kilometers per second (km/s) which is over one million miles per hour.

The Sun is showing 10 sunspot “groups”—not singular spots—and according to NASA, this is far more than has been seen in the past 11 years!

Obviously, solar energy is ramping-up as the winter/summer solstices in the hemispheres has occurred as of yesterday, December 21st.

We already experienced high cosmic energy prior to the arrival of the solstices, and there is no ceasing of LIGHT being sent in various ways to our solar system.

As the LIGHT continues to thrust forward, “Comet Leonard” has greatly brightened, and its tail is like a huge luminous sparkling spray of twinkling stars while its core is like a planet.

It can be seen at night to the left of the planet Venus.

SOURCE is sending an array of numerous types of LIGHT, and notice as the LIGHT comes in more profoundly how events of human chaotic experiences become more intense such as the mandates in Germany and Austria that all citizens take the “injection” or be fined, and after that, further refusals can result in jail time.

How many other countries will follow this pattern? In the United States, the state of New York is offering $100 to all citizens who receive the “injection” before New Year’s Day.

People who have already been “vaxxed” (with both “shots” and with the “boosters” as well are accusing the “unvaxxed” of being the cause of variants working havoc in the world when there is documented evidence that those who are “vaxxed” have a lowered immune system response and can attract the virus as well as many other diseases.

Increasing numbers of health care workers (doctors, nurses) in hospitals around the world are becoming “whistle-blowers” and admitting that most persons admitted into the hospitals with the virus have previously been “vaxxed”.

They are even stating that they have been told to record those who expire of other problems as having done so directly due to the virus.

The virus situation is not the only world problem that humanity is facing.

There are religious wars, child trafficking, animal abuse, economic downturns, vile experiments with Nature (to see how it can be controlled and manipulated), and more examples of a world in vast disharmony.

However, LIGHT IS SHINING on these conditions to get our attention, and an amazing change in consciousness trajectory is almost here.

A larger percentage of humanity is awakening than is realized.

A “Spiritual Revolution” is about to commence.

When conditions on a planet (and in this case we are focusing on Earth/Gaia) become so horrible that humanity has misused its free will to exact harm in and on the DIVINE CREATION, then SOURCE sends forth various types of vibrational frequencies in the form of cosmic occurrences, angelic presences, Ascended Masters, Sages—all forms of SOURCE “ITSELF”— to “diffuse” the “bombs of destruction” and to change the frequencies of consciousness of both the planet and its inhabitants—human, animal, plant, etc.

As Yeshua Ha Messiah taught thousands of years ago as recorded in the HOLY BIBLE: “Even the stones will cry out!”

As the Prophet Muhammad said in relaying one of God’s revelations of the HOLY QU’RAN: “There is a barrier you shall not cross!”

As the Avatar Tehuti stated thousands of years prior in the EMERALD TABLET: “The Soul that entereth into the body of humanity is immortal, but if it tastes evil, it shall not know immortality.”

He also said: “The greatest evil is not knowing God, and the worst disease is disbelief in God.”

These are just a few teachings from the plethora of sacred knowledge that we are still blessed to receive from the merciful and compassionate revelations of SOURCE recorded in the world’s holy texts.

If we think about being in an advanced level of education, courses can become more and more challenging as we learn various concepts, theories, and principles of certain subjects.

We listen to lectures, study, write our research papers, take our quizzes and exams.

We hope that we have achieved excellence.

We celebrate at being told that we will be receiving our degrees. Humanity is collectively being given a chance to listen, study, and advance to higher levels and receive the HIGHER CONSCIOUSNESS DEGREE.

However, our “course work” comes in the form of prayer and meditation, following Divine principles, doing good deeds, caring for our planetary home, and caring also for ourselves—our physical, mental, and emotional wellbeing, for again, as Yeshua Ha Messiah stated to us in questioning form: “Know ye not that ye are temples of the Living God?”

Who in his or her “righteous mind” would voluntarily harm his or her sacred body temple or that of others?

One of our scriptures further reminds us to “Be discerning”. It also says: “Choose this day whom you will serve.”

We are always reminded of the weeks and months ahead. Cosmic events will increase as our planetary home and solar system is “healed” of “blight” and therefore, necessarily given healing doses of SOURCE FREQUENCY.

Humanity must open its mind, its consciousness, to receive the elixir from the SUPER-CONSCIOUSNESS—the HIGHER SELF—the SOUL. It is SOURCE that is extending the “healing potion” of TRUTH to us.

Wherever you are in the world—in whatever hemisphere and whether you are now experiencing winter or summer—use this season to reflect upon your relationship with Divinity.

Are you able to see the signs around you? As the HOLY QU’RAN states: “There are signs for people who reflect.”

It is the ALL—THE DIVINE ABSOLUTE.

We are “lights” of the LIGHT. Let us not disconnect from the “SOURCE” of our existence—the “Divine Womb” where we have been fertilized, gestated, and birthed and from which we are being “re-birthed”.

Again, as Yeshua has said: “You must be born again.”