Respecting The Past And Releasing Ego

Respecting The Past And Releasing Ego 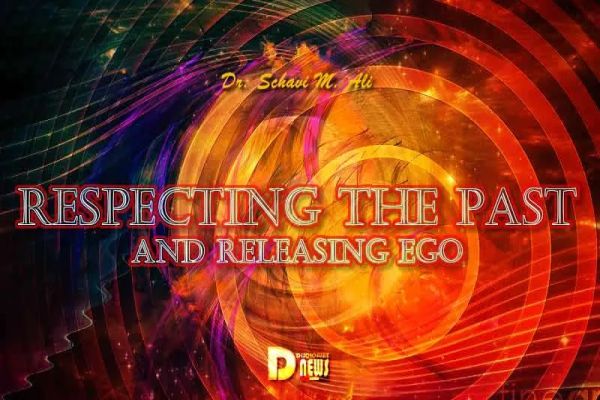 As I studied for my Bachelors, Masters, and Doctorate degrees, I noticed that “Western” concepts and ideologies were always placed at the forefront of the pedagogical process.

Greece and Rome were the classical civilizations constantly referred to whether a course was language-oriented, scientifically-focused, philosophically-based, etc.

Other “non-Western” civilizations were sometimes quickly mentioned but only in the manner of how the “West” had elevated to higher understandings and influenced these ancient cultures.

It was a rare Professor who acknowledged that it is the “West” which has “borrowed” from earlier civilizations and changed certain concepts to fit their desires for ego gratification.

These few Professors were of all types of so-called “races” which was wonderful to experience.

No one could accuse, for example, a so-called “Black” Professor for trying to push forward an agenda of prejudicial teaching.

A so-called “White” Professor could not be accused of pandering to “Black” students.

These Professors—regardless of race— had studied profoundly, traveled, published, and were still studying.

They taught us not to stop advancing in knowledge once we received our university degrees, for much of what we had to accomplish in the university setting in order to satisfy the “Faculty and Board of Governors” was a mere proverbial “drop in the bucket” compared to the many thousands or even millions of years left out of “Western” teachings.

Being both an Academician as well as a Spiritual Scientist of various paths, I became astounded (and still am) at the dynamic knowledge that was the “norm” of the ancient world.

The ancient text known as the MAHABHARATA, which is about 7 times the size of the Greek ILLIAD AND ODYSSEY and contains 18 volumes, is just one example of the great knowledge that is usually missing from the average curriculum if a person has matriculated in a “Western” ideological program of study.

The Sage “Vyasa” who penned the Sanskrit text is given the date of 3100 B.C.E., but it is actually older because, again, we must realize that we are dealing with a “Gregorian” dating system.

The planetary realm that we speak of whose galaxy we refer to as the “Milky Way” was known about long, long ago.

For instance, what we call the “Outer Planets” of Uranus, Neptune, and Pluto were named “Sweta,” “Syama,” and “Teekshana” respectively.

“Pluto” was in the “Krittika” constellation, and it was taught that it caused “pralaya” or “srife,” “troubling.”

When it traversed certain areas of the cosmos, it caused upheaval and complete transformation in order for something new to be developed.

It is interesting that as “Pluto” currently in the Tropical/Western sign of “Capricorn” and in the Sidereal/Vedic sign of “Sagittarius” has created a vibration of major changes in national and international philosophical notions, religious beliefs, political notions, educational structure, in governments, in the military, in corporations, in even smaller businesses, in police action, and even in the structure of our planet as it is elevated higher, activated, and receives greater LIGHT.

When the Physicist Nicola Tesla stated, “If you want to know the secrets of the universe, think in terms of Energy, Frequency, and Vibration,” he was absolutely correct, and his advice was known thousands of years prior by those who were both scientifically and spiritually advanced.

Ancient texts speak of “Savitas” which are continually expanding cosmic rays (RIG VEDA)—something that is often discussed in the “Now” by various scientific organizations.

We also find in an ancient text the teaching: “There are two choirs or companies of God—the sphere that is filled with those who wander and the sphere of those who are fixed” (EMERALD TABLET).

This is speaking of the zodiac “signs” that we call “mutable” (changeable) and those we call “fixed” (very difficult to change).

A few aspects of what I refer to as “Cosmic Science” have been focused upon in this discourse to make the point that we who have been “trained” in the “West” (not truly “educated”) have much to be proud of for most of us worked very hard for our achievements and subsequent career positions; however, we stand only on the shoulders of the ancients who came before us and they are far older than Greece and Rome.

So, let us give a metaphorical “standing ovation” and pour libations to those of African descent, Asian descent, Native American descent, and others who are not thought to be of a typical “Western” racial or ethnic type.

This is not a treatise against the “Western” world.

After all, I live quite well here and have been educated here.

Yet, I realize the shortcomings of the world I inhabit.

This is not a treatise against the “Western” world.

After all, I live quite well here and have been educated here.

Yet, I realize the shortcomings of the world I inhabit.

I observe lots of ego at work here.

Sometimes when people brandish so much ego, it is actually a subconscious fear that they may not be as great as they think they are.

This is how bullies behave.

They pretend that they are strong and can demolish a person or a concept at will.

Indeed, the “West” has pummeled the traditions of others over many centuries.

Yes, there has also been intra-ethnic chaos.

However, when the world record is deeply studied, it will be found that everyone—regardless of so-called “racial” makeup or ethnicity (as I have mentioned previously)—needs to bow down to SOURCE in humbleness and petition for Divine intervention into a world that is still struggling to define and refine itself.

Before we become the “Galactic Citizens” that many of us speak and write about so avidly, we had better take a look at what yet needs to be cleansed before advanced planetary residents acknowledge our “blue planet” as worthy of being welcomed into the “PLANETARY LIGHT COLLECTIVE.”

Remember, the term “GURU” (which refers to the planet Jupiter in Sanskrit) translates as “Bringer of LIGHT from darkness.”

Our sapphire cosmos is ablaze with sparkling diamond-like stars and planets.

Planets become galaxies, and galaxies become universes—on and on.

Eternal expansion is the essence of SOURCE.

Much of humanity must work on expanding its consciousness to avoid continual confusion in so many arenas.

We are constantly receiving messages about this.

No beings on any other advanced planet cares about the petty egotistical problems of this planet we refer to most often as “Earth/Gaia.”

They DO CARE that we do not bring problems out into the rest of the cosmos.

As an alien character said as a warning in a very message-oriented movie called “The Day the Earth Stood Still” (the version starring Michael Rennie and Patricia Neal): “We do not care about your petty problems. However, we do care that you do not attempt to bring them further out into space. Otherwise, we will reduce your planet to a burned-out cinder!”

Okay, so this is a science fiction movie.

However, its message is not science fiction.

SOURCE is mercifully allowing human free will to make decisions that are righteous and to include EVERYONE into its historical records before this planet can be added to the galactic space/time record as a worthwhile orb.

Stop the divisions! Cease the ego!

The “West” does not know everything! No one does.

East or West—every nation has its own level of confusion. However, this was not always so.

There have been “Golden Ages” of peace and harmony that is trying again to be birthed anew.

This article, however, is meant to address the historical and current propensity of “Western” philosophy to apply its critical analysis onto others who they have not even studied sufficiently.

It would be probably better to wear hats and tee shirts that say: “EARTH LIVES MATTER!”

This would then include humanity, animals, and planet life.

Elevating to knowledge that includes everyone requires study of “real” books—not the “E-books” that often leave out certain information and also misspell words and have incorrect punctuation.

It requires study tours when, when possible, to ancient civilizations.

It requires knowing more than one language .

Much of this has been discussed previously.

It is still cleansing old programs.

As the actress Betty Davis said in an old movie when she walked into a filthy room, and which seems to fit some current cellular records: “What a dump!”

However, we will eventually be crystalline perfection.

At least, this is my hope and prayer.

On Saturday, October 22nd, 2022, at 1:12 PM (EDT) solar winds have opened what NASA is calling a “crack” in our planetary magnetic field which allowed activations of a “G.1” geomagnetic storm to have occurred.

More of such storms are expected.

The neutron count is “Elevated,” and the “KP Index” was rated “Unsettled” earlier and is now rated “Storm.”

Solar flares are rated in the “C-Class” ranges and traveling at 350.7 km/s, but this rating is possibly higher since geomagnetic storming has occurred.

Thus far, 112 earthquakes have occurred in the previous 24 hours with a “5.3” magnitude quake happening in China.

We have 834 guests and no members online