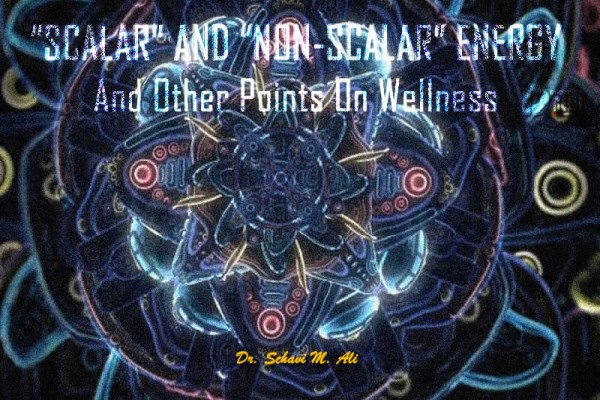 The word “Scalar” is from the Latin term “scalaris” which translates as “ladder”.

“Scalar Technology” deals with a process whereby there is a constant magnification or increase of energy in its output or steady amplification or magnification such that a powerful effect is made within an area— (for example, in the atmosphere), and either enhancing its frequency or destroying all atmospheric molecular structure and also the molecular structure of every material item within it completely.

In simpler terminology, “scalar” refers to purposefully increasing vibrational currents or oscillations within an area such that a power develops that envelops a particularly massive area completely rather than merely targeting-in on a specific thing or entity within the area with no effect on the mass around it.

For instance, experiments are conducted regularly in scientific laboratories where a gemstone or a piece of metal is targeted with “non-scalar” (negative ions) energy to increase the stones or the metal’s vibration on a table or even to completely annihilate the stone or metal, but the table itself and no other part of the room is affected.

However, with “scalar” energy, the entire room is enveloped in a massive vibrational field of of increased “positive ionic frequency” which causes the destruction of the total environmental field and everything within it.

The process of dissolving bodily molecular structure in one place and putting it back together in another which was depicted on the original television series “Star Trek” and its subsequent newer versions is an example of a type of “non-scalar” energy because as the physical bodies were transformed, nothing in the material area of what were called the “transformer rooms” were changed in any way. Everything remained in-tact.

Only those persons who stood on the transformer platform were molecularly changed.

However, had “scalar” energy rather than “non-scalar” energy been used, the spaceship, everything within it, and the entire crew would have been annihilated.

Thus, the “scalar” energy of “positive ions” is dangerous.

Negative ions or “non-scalar” energy, however, is not.

In fact, “negative ions” are advantageous.

Himalayan salt lamps which many people place in their homes and offices actually emit some “negative ions” and can cancel-out some “positive ions”.

There is usually a relaxing feeling in a room where salt lamps are flickering.

Placing them in homes and offices where fiber optic cables have been installed is a wise idea.

The Sun of our galaxy is thankfully being elevated out of a dangerous zone of harmful gamma rays and cosmic waves from other places in the cosmos which were able to zoom into our galaxy, into our Sun, and into Earth/Gaia due to the Sun’s protective shields being depleted by mankind’s unwise experimentations with Nature.

“Nano Tech Quantum Technology” is fine to study, but some of the results of its research has been found to have life-altering outcomes to creation.

If dangerous “positive ions” are capable of moving into the human physical vessel via a type of injection procedure, for instance, the very cells of the body explode like a balloon which has been punched with a sharp pin.

In other words, the human body is a temple—a sacred room—which houses “holy objects” which are the organs, glands, muscles, etc. just mentioned.

SOURCE LIGHT, which cannot be truly analyzed and explained via human vocabulary in any language, is however, somewhat like “non-scalar” energy–the “negative ions” that we need to assist in the transformational process of our DNA and our crystallization or development of what some refer to as the “Light Body”—or becoming a “Photonic Human”.

This is why protection of the physical temple is necessary while the Divine process in proceeding.

The most recent research indicates that the following are the best ways in which to engage the necessary protection:

Further “good” scientific research indicates that proteins from nuts, seeds, and beans strengthen the immune system, thus helping to prevent colds and viruses. Please be careful of taking “Hydroxychloroquine” which was originally developed in the 1940s as a cure for malaria in certain countries. Some people who are not taking the “inoculation” are taking this chemical as a protection against the “virus”. However, too much “Hydroxychloroquine” can harm the liver. If you decide to take this chemical, be sure to have your blood monitored by a “righteous” Physician every three to six months.

Of course, as is always the case, whatever your particular spiritual path is, following its daily rituals is important for guidance, protection, and health.

There are universal rituals, however, that everyone can do such as chanting mantras which have been given as gifts to ancient “Rishis” (“Sages”) by SOURCE for the benefit of all sentient beings in all realms.

Our planet is still being cleansed and elevated.

Therefore, certain types of unnecessary technology can still be pummeled into “Mama Earth/Gaia’s” system and into the systems of the creation upon “Her”.

The “re-birthing” process is occurring gradually so that we can adjust to the intense LIGHT coming in and not be showered or bombarded with it suddenly which would overload our “circuitry”.

This is why we are blessed with knowledge of how to move through the “labor” process in spiritual and natural ways.

We are, thus, still in the process of BECOMING.

Use the next several days and weeks to gather what you need in terms of the suggestions discussed above.

As our planet is still engulfed in “3d” chaos, those who are transcending the confusion need ways in which to deflect away from them discordant vibrations.

We should pray for everyone, but this does not involve being within close range of everyone’s auric fields.

Let your Higher Self be your ultimate “Guardian Angel”.

Remember, your Higher Self is your Soul, and your Soul is a frequency of SOURCE LIGHT.

We have 1605 guests and no members online