Stay In The Light!

Stay In The Light! 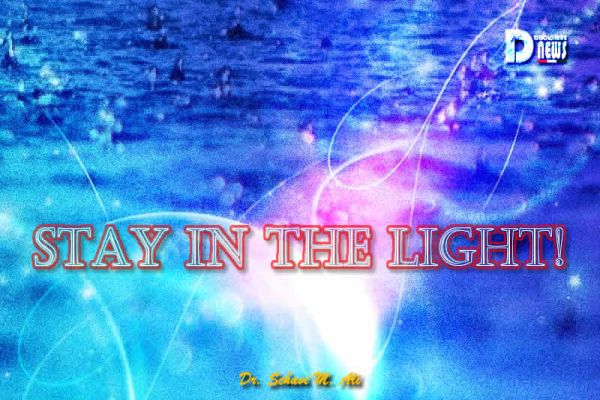 Earth/Gaia is traveling through a stream of solar winds, and several solar flares have exploded from the Sun in the early hours of Sunday, February 20, 2022— one of which is believed to have been of “M-Class” level by NASA scientists.

The KP Index is rated at “storm” level as a geomagnetic storm is occurring. This is when plasma particles build-up in our planet’s magnetosphere causing shock waves to its inner and outer fields.

Many people have been reporting for several days physiological, emotional, and mental symptoms (“Light Activation Symptoms”) of these most recent cosmic events, and the symptoms are likely to continue into next week due to another solar wind stream heading to our planet.

The phrase “clearing and cleansing of planetary density” seems to be the motto of the cosmos in this “Now”.

When one disharmony seems to be dissipating (such as certain nations lifting the mandates of wearing masks and of forcing employees to be “vaxxed”), another rears up such as the threat of a Russian invasion of the Ukraine with the USA taking a central role and being asked to begin sanctions because the USA (even with all of its problems) is being touted as the “Leader of the Western World”.

People are also wondering if the USA will send troops to the area, and if so, yet again another armed conflict will likely begin.

Television news reports are replete with discussions of the possibility of armed conflict beginning in just a few days.

From the “3d” perspective, the planet is in line for devastation.

However, from the higher dimensions, only the toxic energies of long-lasting disharmonious tones are realized as rising up to the surface to be swept away by powerful forces of LIGHT.

Thus, the “Divine Symphony” cannot be turned down or stopped.

It is becoming increasingly louder.

SOURCE FREQUENCY is the true “Surround Sound” in the “Cosmic Auditorium”, and it is healing, stabilizing, and comforting—not loud and blaring like the tones in movie theatres which can harm the nervous system and whose uncomfortable vibrations continue to be experienced in the body and the ears long after having left the theatre.

There is a general disgust and frustration in the global population because of constant dysfunction in politics, society, scientific research, big pharma, organizational structures, economics, religious institutions, etc.

Some people have shared that they feel as if humanity is being “hazed” for initiation into a fraternity or sorority called “Chaos Chaos Chaos”!

This is understandable, especially when migraine headaches, sore muscles, dizziness, nausea, extreme fatigue and other symptoms seem to be ongoing.

Many are finding it more and more difficult to believe that such discomforts are really due to LIGHT frequencies.

A finite mindset (which finds it difficult to move beyond the material realm) cannot understand the amazing space/time of the “Now”.

However, we are developing an infinite mindset—one which realizes that the mind—consciousness (and certainly Super-Consciousness)—is actually non-local and is not encased within the physical brain which is a storehouse of images.

The metaphor of birth must be remembered.

“Labor” is not fun or comfortable.

The beginning stage is not so difficult to handle, but as it increases, the pain becomes almost unbearable.

We grit our teeth; we bear down; we push; some of us scream!

Afterwards, tears flow, and we embrace our new baby and kiss his or her sweet cheeks.

We gradually calm down after the experience and rest.

With LIGHT coming into our planet so potently and also soaring throughout the galaxy, we too are potently receiving the LIGHT in every molecule, atom, and subatomic particle of our “being”— every organ, muscle, tissue, ligament, system (cardio-vascular, lymphatic, digestive, reproductive, eliminative, and all parts of the nervous system (central, parasympathetic, sympathetic, autonomic)—every chakra (“wheel of LIGHT”) is being charged-up with energy from SOURCE FREQUENCY.

We may seem to look the same on the outside because the transformation is taking place first on the inside of the physical vessel, and the change began in what is often termed “The Unborn Mind of Buddha”—the newly enlightening consciousness moving up to Super-Consciousness—the HIGHER SELF which is the SOUL which is SOURCE FREQUENCY—being acclimated to for knowledge, wisdom, and power.

This is why it is so vital to often declare “I AM BLESSED BY SOURCE LIGHT!”

There is a verse in an old gospel tune which says: “God, don’t move this mountain; just give me the strength to climb.”

We are being given the strength to move up “the mountain” far into the clear air of protection and peace.

Remember the stories of various Prophets and Sages who went atop mountains to commune the INFINITE PRESENCE.

In the ancient text PER EM HERU (“Book of Coming Forth by Day”), Heru (called “Horus” in Greek) meditated on top of a mountain and also fought the evil “Set” on a mountain.

Moses received the “Ten Commandments” on top of a mountain and heard the words “Eyeh Asher Eyeh” (“I am That I am”).

Yeshua (known also as “Jesus” in Latin) meditated on top of a mountain and also fought with evil that tried to get him to throw himself down from the mountain in exchange for being given all of the riches of the world.

Mount Kalash in Tibet is considered the sacred place of SHIVA (“The Transformer”—who some refer to as “The Destroyer”)—one of the three major aspects of the DIVINE ABSOLUTE—the ALL.

The other two are BRAHMA (“The Expander”) and VISHNU (“The Sustainer” who is also known as NARAYANAYA).

Mountains have always been taught in ancient teachings to be places of attunement with powerful ethereal holy forces.

The pathway upwards to it is the sixth chakra called “Ajna” (“To Command”).

As people who know about the chakras realize, we have many chakras, and seven of them are considered to be the major ones.

Thus, we are “born” into this planetary realm with LIGHT because “chakra” translates as “Wheel of LIGHT”.

Our LIGHT is becoming brighter, more extensive, and more powerful— if we allow it to do so with our free will.

We can choose to believe in destruction and devastation or in transformation and regeneration.

Reading of as many ancient scriptural texts as possible (preferably in their original languages) is advisable as well as reading scientific information from reliable sources.

In many cases, science is starting to align with spirituality.

As cosmic events play the concertos of the “Divine Symphony”, know that we are a part of the “Celestial Orchestra”.

We must stay in the LIGHT of the “INFINITE CONDUCTOR”.