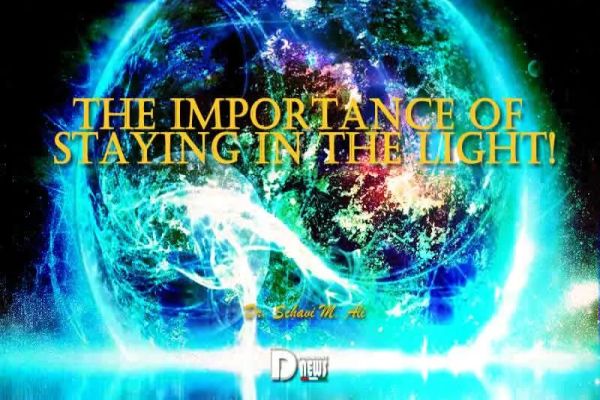 As most people know, I am not a proponent of watching hours of mainstream news, but I do believe in observing some of it for short periods of time so that we will understand the general “thought atmosphere” of the human collective, and by doing so, we can know where our prayers may need special focus.

Without going into detail, so much trauma has unfolded within just weeks on our planet in terms of violence, political confusion, famine, the constant pushing of dangerous chemicals onto humanity, warfare among nations, and severe weather situations (tornadoes, floods, etc.).

Many people believe in ignoring these happenings and say that focusing on them continues to allow them to occur.

Instead, from my study of numerous scriptures, when we ignore disharmony, it continues to “play its ugly tunes” because a door has been opened via ignoring it for it to plunge into the collective experience.

An example is like looking at piles of refuse in a lake or stream and thinking that it will somehow just go away without human hands removing it.

Because the refuse is there, others who have a low level of consciousness will throw their refuse into it as well as if it is a community waste bin!

We must realize that in this continuing era of “Kali Yuga” (“Age of Chaos”) that humanity has been given the free will to elevate or devolve—to shake our heads at the horrors on our planet and keep on partying and shopping and making major business deals or to cease from the constant drive to obtain material accoutrements for purposes of prestige or because there is a feeling that these material goods will somehow make us feel better about ourselves.

There is nothing wrong with having a lovely home, car, clothing, etc., but there is something wrong when that becomes the sole focus of people’s lives while giving only a couple of hours a week to the DIVINE REALMS at the local church, mosque, temple, or synagogue.

Yet, when something goes wrong, people are quick to beg SOURCE for help.

When the help arrives, rarely does the average person bother to thank SOURCE for its mercy and blessings.

They just happily move through life partying and shopping until the next crisis occurs.

“Mama Earth/Gaia”—a conscious planet because it has life force—is not idly allowing lower levels of human consciousness to continue to allow harm to creation.

Electromagnetic energy does not just come from the Sun of our solar system.

Our planet contains its own electromagnetic force field which can connect with the force field of the Sun which receives LIGHT from the Great Central Sun.

This is how the surrounding magnetosphere of our planet works. It is constantly thriving with ENERGY, FREQUENCY, and VIBRATION as it “sings” with SOUND AND LIGHT TRANSMISSION AND RECEPTION—all of which we, as human beings (as well as all other aspects of creation) receive and transmit.

Instead of ignoring what happens on our planet that is currently filled with horror, we can consciously surround it with LIGHT and ask SOURCE to heal the situation, even though it may be full of overwhelming emotional trauma.

It is important to sit quietly periodically each day and to envision our planet enveloped in SOURCE LIGHT and then to pray in our own way for it, for others, and for ourselves.

For those who are deeply involved in ancient daily rituals, chanting an appropriate mantra on a mala and then wearing that mala is a way of being connected to SOURCE FREQUENCY because a mala has life force due to the prayers and mantras constantly recited with it.

It becomes a soothing, healing, protective, “spiritual tool” also filled with hope. However, in whatever way that we can daily connect to the DIVINE REALMS, we must do so.

As I mentioned in a previous article, we are in what is known as the ‘Twilight of Kali Yuga”.

This is when conditions of such an era are at their most challenging.

It is, however, a time when opportunities arise as well for the awakening of the collective in very profound ways. SOURCE does not cause disharmony.

After all, one of “ITS” attributes since ancient times has been revealed to be “UNALTERABLE GOODNESS”.

It is human free will used wisely or unwisely that draws forth certain experiences accordingly. SOURCE has created scientific and spiritual principles. If they are worked with properly, we are blessed.

When mankind instead attempts to rival SOURCE, a tremendous price is paid.

There is a verse in the scripture known as THE HOLY BIBLE where SOURCE states that: “If mankind would turn from its wicked ways, I would hear from heaven and turn and heal the land.”

In the HOLY QU’RAN, there is a similar verse when SOURCE teaches that: “There is a barrier you shall not cross.”

The BHAGAVAD GITA speaks similarly in the verse which states: “Those who preserve the dharma are protected by the dharma.” (For those who are unfamiliar with Sanskrit, the word “dharma” translates into English as “path” or “way” or “law” and refers to Divine principles).

Even though there have been historical and cultural aspects added to various world scriptures by mankind’s attempts at control and manipulation, they still have hidden within the depths of their pages the Divinely revealed laws of SOURCE which mankind cannot erase.

Of course, study is required in order to known the difference—years of serious study—not just attending a few workshops or seminars!

These types of sessions may whet someone’s appetite for TRUTH, but it would be only an appetizer.

This is one of the problems in a “Kali Yuga” era.

Too many people are spiritually and intellectually lazy.

LIGHT that is soaring into our planetary home so quickly and fast is bringing with it messages for those who are elevated (or elevating) enough to understand them.

LIGHT is becoming more intense in its flow throughout the solar system. It is pouring particle plasma into both our planet’s sun-facing side and its farside.

It is activating the inner core and the outer arena. Earth/Gaia is being shaken, tossed, stirred, and elevated all at the same time—and so are we.

Our planet experiences “Light Activation Symptoms” (or “Ascension Symptoms”) just as we do.

There is a resonance of ENERGY, FREQUENCY, and VIBRATION.

The “Schumann Resonance”— abbreviated “SR”— (although sometimes technological equipment which registers it cannot fully access the strength of the activations because they are so very powerful coming from SOURCE LIGHT) is quite a valuable resource for showing just how our planet is receiving certain SOURCE LIGHT activations.

When there is a “black-out” in the readings of the equipment, this is because the energetics are so powerful in terms of incoming LIGHT that the equipment simply cannot register it.

The equipment is only calibrated to go so far in its capabilities to inform us.

Yet, it is still a wonderful resource to give us an idea of what is happening.

So, its “Power” readings should be consulted daily.

The “KP Index” is also valuable to let us know about the neutron counts (cosmic rays) coming into our planet and how they are causing conditions of either “Quiet”, “Unsettled”, “Storm”, or “Severe” to occur.

In recent months, cosmic rays have been labeled as either being “High” or “Elevated” as they affect our planet, and the “KP Index” level has been rated as “Unsettled” or “Storm” several times.

What must be understood is that LIGHT is always coming into our planet.

It is steady and most often intense.

Sometimes it swirls and gives a gentle touch and sometimes it is very potent as it moves through our nervous system and each cell—all of which contain DNA—and into every molecule, atom and sub-atomic particle comprising our physical vessel.

Even stardust has been shown to carry the same substances as we do. So, as we stay in the LIGHT via our prayers and other rituals, we are staying in the SOURCE FREQUENCY.

We will be better able to receive and understand the guidance of the INFINITE PRESENCE which is always using “ITS” power to allow us to obtain knowledge and wisdom.

We can either enjoy “Cosmic Class” or choose to drop the course and remain in the density of the “3d” chaotic world stream.

The more who choose “class”, the more that we will enjoy LOVE, PEACE, HEALTH, ABUNDANCE, and all of the blessings of the DIVINE ABSOLUTE/GREAT SPIRIT/DIVINE MOTHER/THE ALL/ALLAH/AHURA MAZDA/SHEKINAH—SOURCE–who has many names and forms but who is above them all.

Many are engaging today, Wednesday, May 25th, 2022, in special prayer known as GLOBAL CONSCIOUSNESS CONNECTION TO THE DIVINE REALMS.

We are praying three times—Morning, Noon, and Evening—a special prayer for our planet.

However, let us not make this just one day of special attunement.

We should have relaxation and fun in our lives too, but we must not negate that we are “lights” of the LIGHT, and thus, we must keep ourselves in connection to the CREATOR of our own LIFE FORCE—the ENERGY, FREQUENCY, and VIBRATION of THAT WHICH IS ABOVE AND BEYOND.

Spiritual rituals can be fun too.

They can make us calm and happy.

They can make us taste the succulence of a “New Golden Age”.

We have 1430 guests and no members online