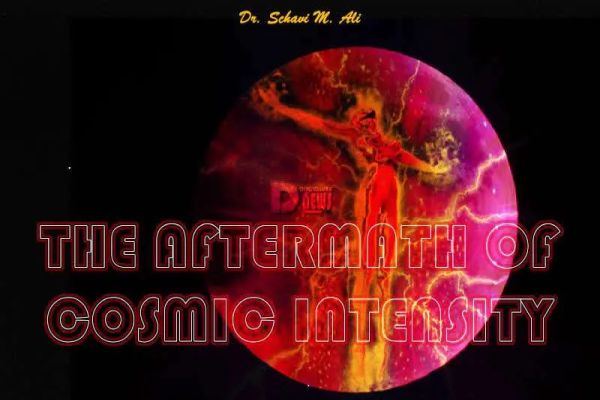 Shortly after the Total Lunar Eclipse reached its dark embrace at approximately 12:11 AM (Eastern Daylight Time) on Monday, May 16th, 2022, an “M.2-Class” solar flare occurred at 13:27 Universal Time which also indicates that a Coronal Mass Ejection exploded.

Sunspots are poised for further “M-Class” flares, and solar winds are traveling currently at about 527 km/s (kilometers per second).

There have been 78 earthquakes within the last 24 hours of “1.5” or greater on the Richter Scale—one of which was a 5.4 in Sakhalin, Russia and a “5.8” in Bengkulu, Indonesia.

Several states in the northeastern sector of the USA are being warned that a severe thunderstorm is on its way which could significantly affect 60 million people (New York, Pennsylvania, Vermont, and more).

These storm vibrations will reverberate through the Midwest and parts of the South just like side effects of a quake felt in various places that are not very close to the epicenter of the quake itself.

The Full Moon has a “pull” upon earthly vibrational frequencies, and the Total Eclipse of the Moon had an added intensity.

Besides increased physiological, emotional, and mental “Light Activation Symptoms” (LAS), technological glitches are happening to computer systems (in homes as well as in businesses, airports, and major institutes), cell phones, short wave radios, and other devices. Satellites in space are also not above being affected by the cosmic forces ust discussed.

With the eclipse having been in deep, transformative, often secretive Scorpio, our planet has been extremely amplified.

As has been an almost constant subject, the political, sociological, philosophical, and religious chaos from the “3d” perspective is adding to the atmospheric density as atomic frequencies of thought, feelings, and actions move out into the ethers to formulate into waves of energy that can manifest as certain experiences individually and collectively.

Remember these three principles which have also been discussed previously (after all, with Mercury Retrograde, it is an excellent time to review important information):

Thus, what we send up and out via our levels of consciousness (which is non-local, i.e., not centered in the brain) creates certain circumstances, and we are always receiving LIGHT frequencies into our trillions of cells which also have SOUND energetics, and we are steadily transmitting from the levels of our consciousness “housed” in the DNA of our cells.

Vibrations are faster within us—not slower.

The new “normal” is a steady crystallization of the physical vessel, and for many, greater mystical capabilities are settling into the super-conscious field where the HIGHER SELF is in residence.

The entire process of planetary and galactic change requires much tuning into the HIGHER SELF via prayer and meditation, participating in “purification lodge ceremonies” (commonly known by most people as a “sweat lodge” which is an incorrect terminology), taking sea salt baths and showers, chanting mantras, as well as obtaining lots of extended rest and relaxation while sensitive material forms (human physical vessels) level up to the elevated consciousness—all of which as has been focused upon more than once..

The month of May still has lots of energetics to release.

We must prepare to receive more downloads of information and further upgrading of DNA.

Many Spiritual Scientists (also known as “Mystics” and as “Cosmic Scientists”) have suggested that May will set the course for the entire year as it sails along on the “Cosmic Sea”.

Nurturing ourselves is the best way to navigate the waters.

We have 1258 guests and no members online