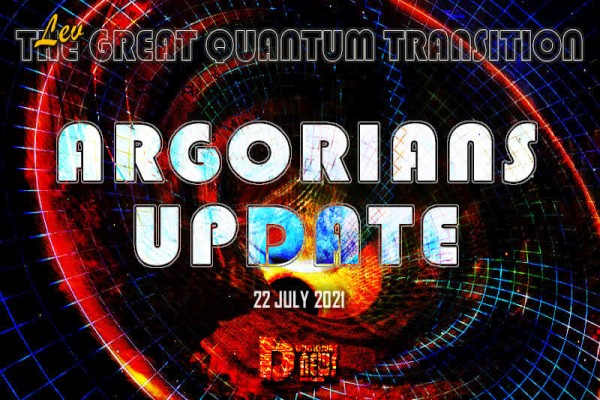 25D Argorian space squadron continues to move through the interdimensional filter, moving Earth into a new 5D vibrational orbit. Counter quantum currents inside the filter purify the entire energy complex of the Earth.

Four spheres have been created on the protective layer of the planet’s core, broadcasting ready plasma to build a new crystal.

They provide the connection of the core with the 6D and the formation of five-dimensional space on Earth. It is indicated by a new crop circle in Derbyshire (UK).

Inside the interdimensional filter, rotating open Portals attract the necessary energy flows and raise the vibrations of space.

All fundamental 3D programs and components are actively removing from the Earth’s field and new 5D programs are loading.

The figure below shows what quantum flows Galactic Committee and Argorians’ fleet use for it.

Under the influence of ultrasonic pulses, the red energy ERMA, which forms the Matrix, its energy structures, and matter, releases clots of finished plasma.

These high-energy bunches are Intelligence substances intended for materialization.

Clots transform platforms of four-dimensional space. Forming plasma, they eject it through the Portal converters, changing our environment.

ERMA condenses the plasma. The dark brown energy CHERGEN cleanses the planetary space for it, sorting out and removing chyrons (particles of Evil) from it.

4D quantum flows, pass through spherical structural lattices which, as shown in the picture above, have a toothed structure. Lattices serve as Portals.

What energies are sent to Earth in the filter to make the grid work?

Changing the Hologram field creates interdimensional changes as the planetary core rotates and removes unneeded 3D plasma through the Portal.

The Portal works on the following energies:

Quantum currents coming to Earth now have a strong effect on our brains and the energy around us.

The 5D matter formed by the Source’s radiation creates Hologram vortices that are perceived by each of our cells, loading us with new information and programs.

The untrained mind takes them literally as a signal for the self-destruction of the organism.

For those of us who have chosen the path of transformation and intense inner work on selves, the new energies change biological needs, helping us to adapt to the 5D.

All pyramids of the planet work at full capacity. Therefore, it is not recommended to stay or travel in the anomalous zones.

Earth often emits unusual sounds – it’s the planet’s acoustic transducer working. It should work, but not in this range.

Sound distortions are caused by colossal amounts of negative energy from people, giving tremendous pain to the planet.

Gaia protects Herself by a shield of 5D vibrations.

They cannon off our negativity, returning it in full to us in the form of natural disasters and pandemics.