The Balancing Act: The Opening Of A New Chapter Of Perception 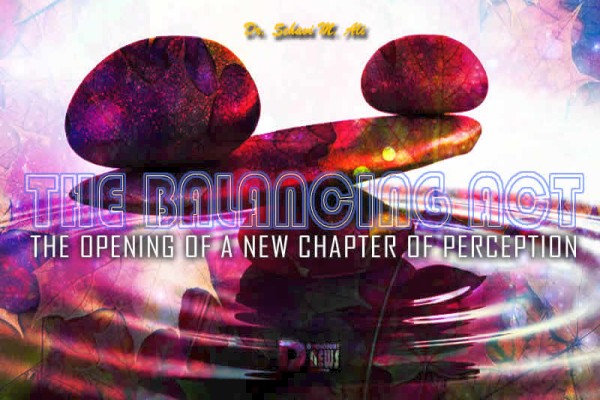 High-wire circus performers carefully navigate their performances, and athletes who perform on balance beams do the same.

In similar manner, the equinoxes are times of perceived balance as the seasons turn the pages to a new chapter in the “Cosmic Holy Book”.

An equinox or a solstice is not the entire season; rather, it is the point of a particular day when the Sun of our galaxy is at a different angle relative to our planet.

However, let us explore this phenomenon further.

As most people around the globe can attest to, “time” seems to have sped up dramatically, and indeed this is true.

As cosmic forces pour into our planet (flares, winds, CMES, etc.), Earth/Gaia’s geomagnetic fields are shifted and tossed as the frequencies and amplitudes are activated.

As the planet elevates higher in the cosmos and receives enormously greater LIGHT, its turning on its axis is faster and its glow is brighter.

This provides a new earthly “time sequence” in the entire space/time continuum. In other words, we perceive the passage of time differently.

Shifts in consciousness create shifts in the energy, frequency, and vibrations around us—and this includes our perceptions of time.

Metaphysically, therefore, the balance of an equinox is now not in the equal number of hours of day and night, but in the life forces, cycles per second, and oscillations of energy which we transmit and receive as consciousness either elevates or lowers.

This adds a spiritual concept to the movements of time rather than just a scientific one.

Consider also this situation: When it is cloudy and rainy outside during the day, the Sun is certainly shining, but its bright rays are not being received in the given area.

If this weather situation persists throughout the day, then by sunset, it will seem as if there has been little to no actual daylight. It will have been more dark than light.

Therefore, the darkness in the horizon will seem to have lasted for most of the so-called 24-day regardless of whether it is spring, summer, autumn, or winter.

So, during the day of an equinox seasonal shift, if such weather conditions as described are the case, then daylight will seem to be relatively gray and dark and there will seem to be less than twelve hours of actual light, and it will meet in just a few perceived hours with further grayness and darkness as sunset hovers over the horizon.

So, spiritually, what is it that we balance at the equinox when a new chapter opens in the “Cosmic Holy Book”?

We are offered the balancing of the right and left hemispheres of our brains more profoundly—creativity/spirituality with logical/analytical daily affairs.

We can, however, concentrate more diligently on attuning our pineal gland—the “God Particle”— to the principles of INIFINITE PRESENCE—the SOURCE of our “beingness” which then results in a centeredness and in the reception of spiritual messages.

Time then is seen as an illusion in the upper realms, although we do divide it into segments in the “3d” perspective for purposes of our daily activities.

Does this discourse suggest that humanity has been “allowed” to perceive the balancing act of an equinox due to certain levels of consciousness that are extant on the planet? Yes it does.

So, as we observe the equinox when the Sun moves into the sign of balancing Libra in the Tropical Zodiac but analytical and critically analyzing Virgo in the Sidereal Zodiac, we can see how it is our thought processes—our levels of consciousness—with which we open a new chapter.

The changing colors of the seasons and the different temperatures serve as “canvases” upon which we “paint” our perceptions of reality and subsequently think, feel, and act in accordance with what we have “painted”.

The day of an equinox is a powerful day in which to engage more avidly in various spiritual practices and rituals of our paths so that we can understand the deeper knowledge of our planet as has been given throughout the ages by the Avatars, Ascended Masters, Sages, and Prophets, etc. , and we can then use this knowledge with wisdom.

It is also a wonderful day in which to decide upon our direction for the completion of the year such as projects that we will pursue, ideas that we will study, etc.

I suggest meditation, journaling, wearing a special prayer mala, spiritual baths and showers with essential oils, and spending time walking or relaxing by a stream or pond if the weather permits.

This is an ideal day to take a vacation day from work or school, but of course, in our current world, observances such as seasonal shifts which offer consciousness transfers is not a reality.

In the “New Golden Age”, however, it will be because seasonal changes will be known as opportunities for further consciousness elevations.

Day and night will be according to the dimensions we choose to travel into in a given time frame with our “crystalline-ness” as we will have shed our carbon systems.

Even now, the dizziness that many people are reporting is actually a “Light Activation Symptom” (if they have been properly focused on spiritual and natural paradigms and have not damaged their “earth suits” with chemical drugs, poor foods, and other kinds of toxicities) which is a tuning-up of the sixth and seventh chakras.

Feelings of the nervous system being stirred-up within the physical vessel and rapid heart rhythms is being in alignment with Earth/Gaia’s faster spinning and higher elevation, and we may also feel intense heat.

There are, of course, many other “Light Activation Symptoms”.

How we address the symptoms also attests to the faith we have in the spiritual process of DNA transformation that is occurring.

The word “alternative” is also not a good one to use in terms of spiritual and natural wellness therapies because these were the “normal” health maintenance procedures of the ancient world and in many cases are still so today.

Thus, the proper term should be “Original Medicine”.

May everyone be blessed by the rich gifts of the equinox as we continue to navigate our “balancing beams” of LIGHT as the “God Particle” with which we transmit and receive Divine energy, frequencies, and vibrations.

As Charles Dickens said in his book A CHRISTMAS CAROL as the story continually unfolded: “We do but turn another page”.